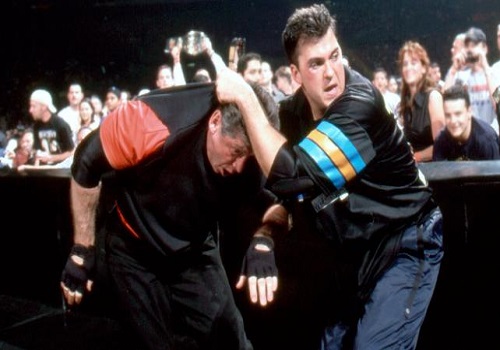 While prepping for the role of Stephanie McMahon for the P2B podcast Christmas special, I watched a lot of Youtube clips featuring the McMahon family so this one just stuck out to me. 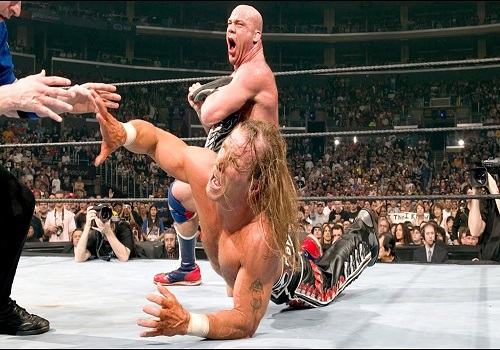 I was able to open round two with this classic war between two of the all-time WWE greats and two of my all-time favorites. Both men went balls to the wall to deliver a WrestleMania epic and they met their goal. It was a rare dream match that met all expectations. 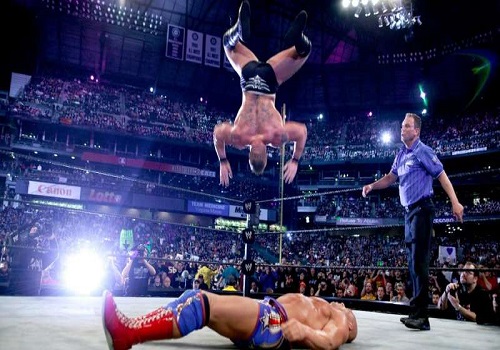 A great one-on-one title match between two guys who are a must-have for any card. Plus, a bonafide WrestleMania Moment!(TM) on the Best WrestleMania of All Time? Yeah, it’s a no-brainer.

After getting the ultimate non workrate main event with Hulk vs Andre, I wanted to get a showcase workrate match to bookend the first selection. I thought this was the best available choice and displays a match that was revolutionary at the time and still holds up on repeat viewings. 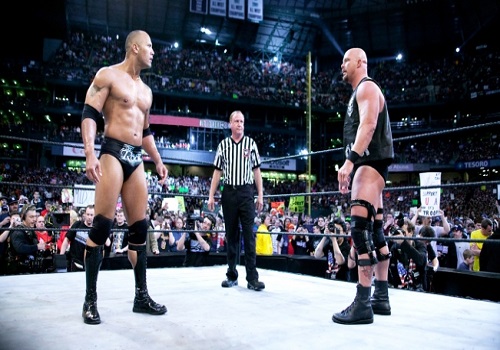 A match featuring the two biggest stars of the “Attitude Era” facing off for the last time. Austin would retire and Rock went off to Hollywood as the chapter finally closes on this feud. 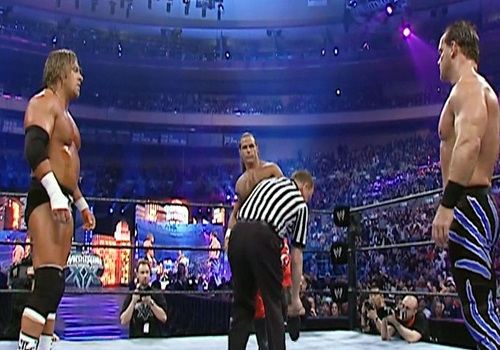 Say what you want about who won the match or your thoughts on him in general but this is a top 5 WrestleMania main event. Triple H begins a four show stretch where he does the right thing and puts over the hot star of the moment. 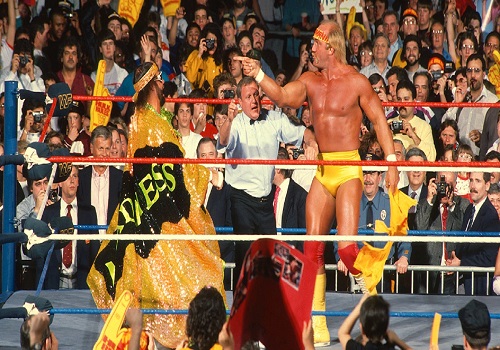 The Megapowers Explode! With this pick I nabbed two of the top three all-time WWF wrestlers (according to a certain list at a certain website,) one of the greatest angles of all time to build my show, and an awesome world championship match (with great commentary) to boot!

Pick #24: The Undertaker vs Batista (WrestleMania 23) – Selected by Aaron George 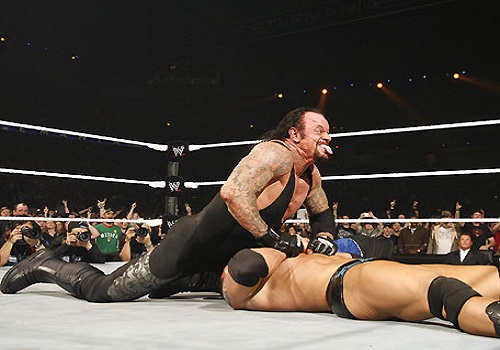 Two huge guys throwing bombs in perhaps the best main event sprint  in Mania history. Going in no one expected the classic we got. It was also the last time that the streak was REALLY in jeopardy.  They had something to prove and they proved it. When I envisioned my card my first two picks were Flair/Savage and this. The pace and intensity are off the charts. Batista’s best WM Match, one of Taker’s best as well. 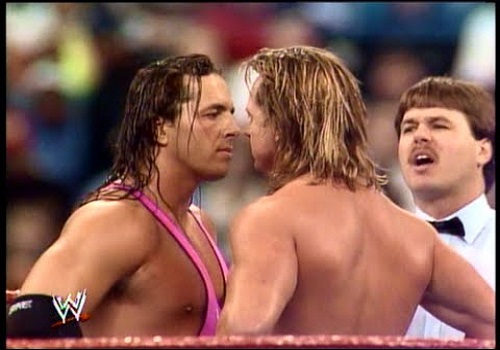 As a guy who doesn’t consider himself a HUGE Bret Hart fan, I’m surprised I took Bret with my first two choices, but this is an excellent babyface vs. babyface match that really helped Bret become the star he would wind up being of his generation. Maybe Piper’s best match in WWF history. 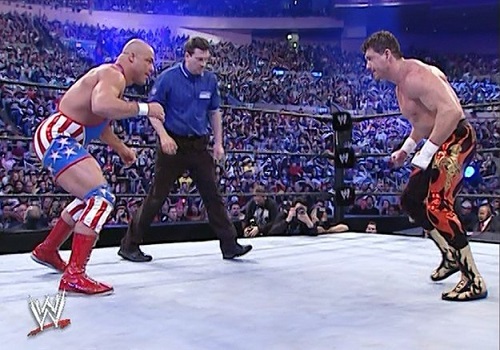 This WWE Title match may not have closed the show, but it would rightly be able to main event any number of pay-per-views. Guerrero loosening his boot to escape the Ankle Lock to get the win and retain the title is still one of my favorite WrestleMania moments. 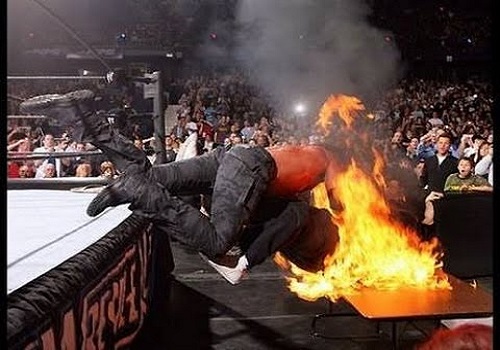 Is this Edge’s best singles match? It’s certainly up there and ranks highly when it comes to the pure violence as well. For Mick to be wrestling this type of match at this age and shape is awesome, a near-perfect garbage match with some hilariously innovate barbed-wire spots. This match gets my blood boiling, my rage seething, my love of ultraviolence going and as far as WWE matches go (and especially WrestleMania), this is one of the more violent affairs the company has put on. I truly love this match and consider it one of the best matches of all time. You can’t watch this and not right a high from what it brings, super super fun and super pleased to have it on this show. 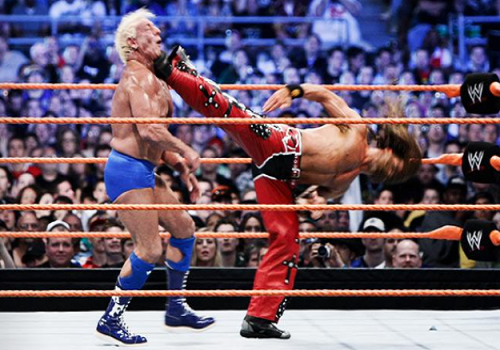 To me, when evaluating these WrestleMania matches, the feeling of spectacle or a “WrestleMania moment” is almost as important as overall match quality. Having attended in person, I’ve always had a high regard for this match and the feeling in the stadium for what we’d all like to pretend was Ric Flair’s final match. Shawn is on his game here, and Ric delivers one last time on the grandest stage of them all.

Pick #29: Edge vs The Undertaker (WrestleMania 24) – Selected by Greg Phillips 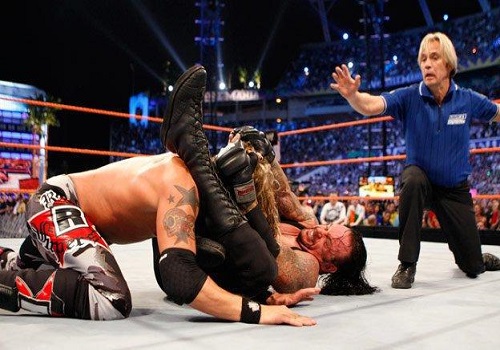 This pick gives me a World Heavyweight Championship match (both diversifying my title spread and adding prestige) and a truly great bout. This is a match that ages extremely well, and gives a clear face-heel divide to counteract the more 50/50 main event. 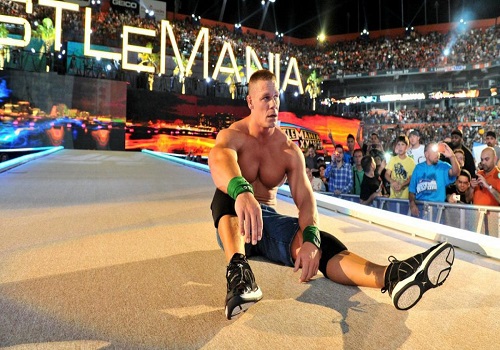 Two of the greatest stars in history square off in a dream match main event after circling each other for a full year. My favorite wrestler facing his spiritual predecessor and carrying him to a great match. People popping when the bell rings in 2012. Yes to all of that. This is also a rare look at Cena actually working as a heel during a match, and it ultimately being his undoing when he gets caught acting too cocky.

Pick #31: The Dudley Boyz vs The Hardy Boyz vs Edge & Christian (WrestleMania 16) – Selected by Todd Weber 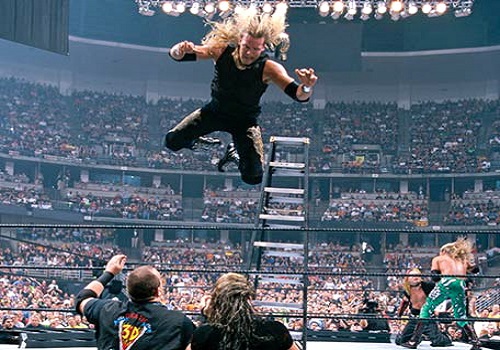 This was easily the best match on a mostly mediocre show, and though their TLC Classic the next year was substantially better, someone had already drafted it. Throughout my draft, I really did my best to only feature superstars and matches for specific titles only once if possible for variety, and this match uses up 6 great Mania performers and the tag titles. It’s a great snapshot of the tag scene during the Attitude Era. 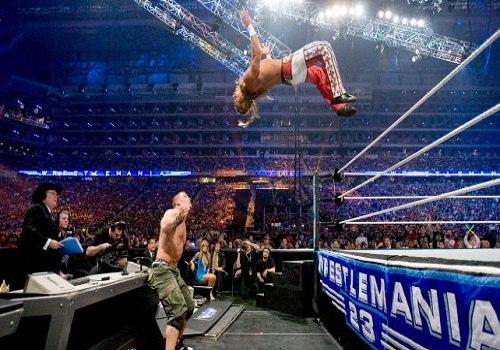