Now, I have no illusions about the substance of Cap’s Silver Age exploits aspiring to be any kind of high art. That simply wasn’t Stan Lee’s style. Instead, you have to stand back and take the stories in as a whole in order to form a clear picture. To that end, in the ’60s we see Cap navigating the counterculture, admittedly to somewhat (unintentionally) hilarious effect. Nonetheless, his …coping problems.. expressed an apprehension no doubt shared by his countrymen at the time — and without the distinction of being a walking time capsule. Remember, kids, the Marvel heroes are nothing if not relatable!

Lee, always striving to place the burgeoning Marvel Comics at the forefront of youth culture, understood the necessity of moving the characters forward. This was especially important in the case of Captain America, whose very origin screamed “irrelevance.” In a nod to the 1969 subversive New Hollywood hit Easy Rider (which itself appropriated Captain America’s namesake for Peter Fonda’s protagonist), Lee has Steve Rogers take to the road to “find himself,” and ostensibly, America.

Having spent a good bit of time on the college lecture circuit, Lee definitely knew his audience. The old-fashioned Steve Rogers may not have been an active participant or fully grasped the nation’s youth movement, but he knew injustice when he saw it. Lee’s Cap spends a good portion of his wanderlust phase on college campuses, drawn in to student protests. For a character so emblematic of the old guard, his would have come across as stunningly anti-establishment just a few years prior. But with the Kent State massacre still fresh in minds of the public, it gave the readership a voice in their “disposable” entertainment. 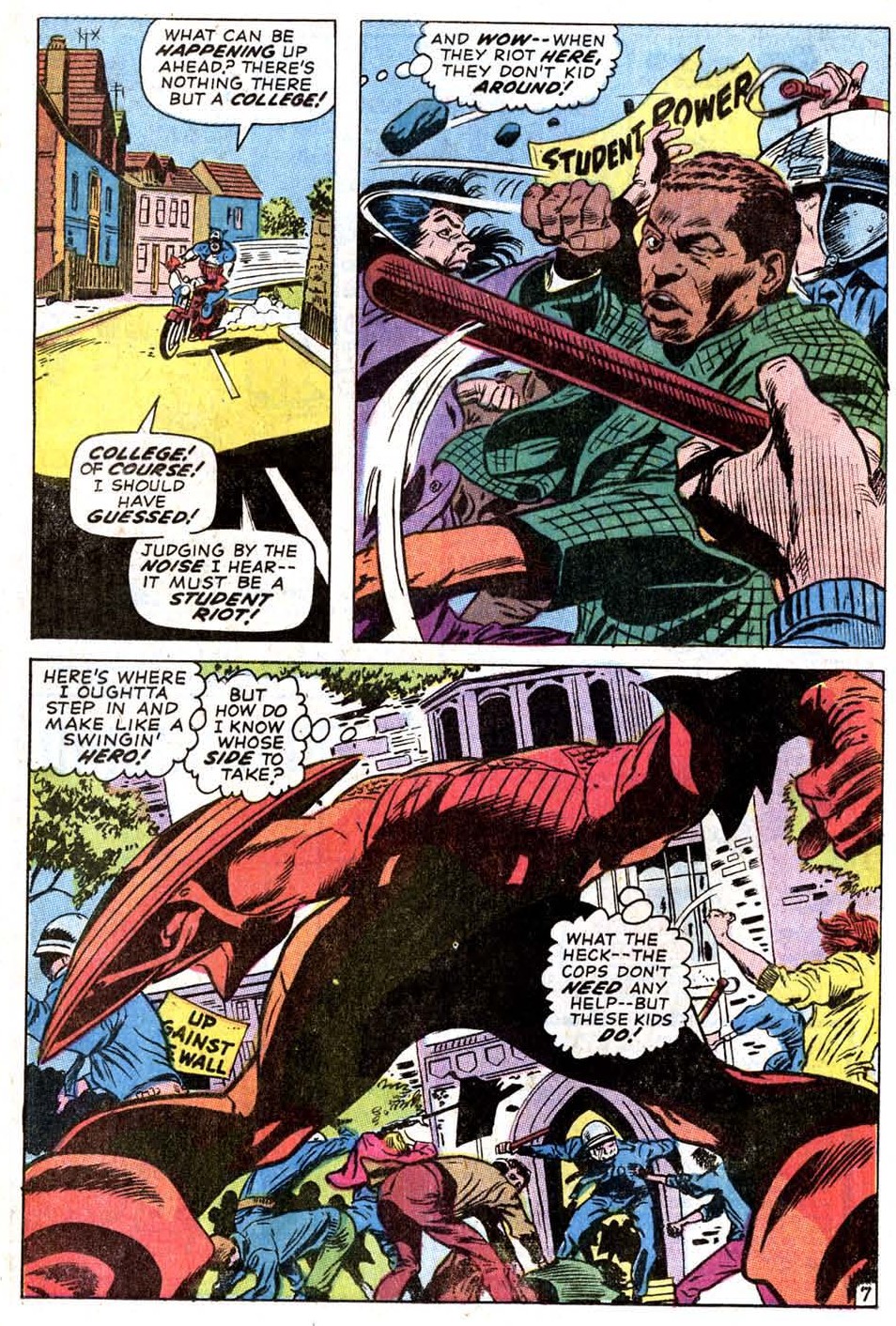 By the wrap-up of Stan Lee’s run, Steve Rogers had managed to shake off much of his culture shock with the series embracing a more progressive mission statement. In typical fashion, Lee was never quite willing to completely pull the trigger on the rhetoric in his Captain America. Lee’s Cap defended freedom of expression, often without taking a particular stand one way or another (notably, he shied away from much in the way of a direct position on Vietnam). Under Lee, one could not always be sure whether Cap supported the content of the dissidents’ speech, or merely their right to say it — a shrewd accommodation to avoid alienating readers on either side of the fence. The next creators in line would make Lee look positively restrained by comparison.