Skip to content
Music The Best of PTBN
Parv The shame of this album is that it’s just nowhere near as awesome as the hair-raising gospel tour that Bob went on around this time. I have lots of recordings from various shows around this time and they all just smoke what he does here. There is a hint of that passion and energy here and there on this album, not least on the up-beat title track. “Solid Rock” is pretty great.   But a lot of it is just killed by expensive-sounding and extremely clean production. But there’s also a lot of middling shit here too. Oh and no matter which version of the album you get, the front cover is horrible; I’ve gone with the awful original, but check out equally bad re-release version too. Try to find stuff from his 1981 tour and if you can’t find anything just listen to the two tracks I’ve highlighted and skip this until you’re deep, deep into Dylan. 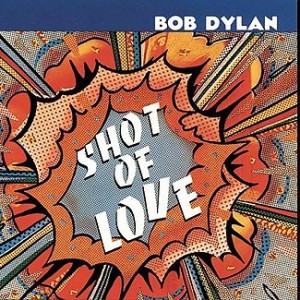 The trend of Dylan using guest stars on his Christian stuff continues here as both Ringo Starr and Ronnie Wood turn up for some hot gospel action. The final part of the “Christian trilogy” is a good bit better than Saved because there are fewer slow songs dragging things down and that gives proceedings a genuine sense of excitement. I’d almost call this a jaunty record. There’s more honky-tonk piano and a sort of Caribbean jangliness than on the other Christian albums. “The Groom’s Still Waiting at the Alter” is a great rocker mixing this urgent up-tempt piano-led gospell-y sound with Dylan’s cool Old Testament imagery. Finally, “Every Grain of Sand” is easily his best Christian song which can also double as a sequel to “Chimes of Freedom”. It doesn’t sound like anything else on the rocked-up excitable album that precedes it, but it’s up there with Dylan’s very best songs. 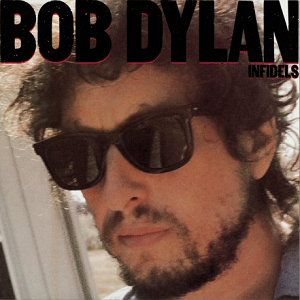 At the time, Infidels was hailed as a return to form for Dylan as fans and critics everywhere rejoiced that he was no longer doing all this Christian stuff and returning to more secular and political material. Witness Stephen Thomas Erlewine on Allmusic talk about how “its writing is closer to Dylan’s peak of the mid-’70s” and “Infidels is a triumph, finding Dylan coming tantalizingly close to regaining all his powers”. The truth is that, first, it’s not obvious that Bob in any way is turning his back on Christianity here, second, the political songs here are truly rubbish, and third this is probably his worst album since  Planet Waves – or if you like that, Dylan. There are some saving graces: “Jokerman” is a major song that has had a lot of essays written on it. But honestly, pretty much everything else here is shit, and some of it embarrassingly so. I won’t get into the politics of “Neighbourhood Bully” but it’s about Israel. “License to Kill” features this stunning couplet: “Oh, man has invented his doom / First step was touching the moon”. Bloody hell. Maybe I just have a massive blind spot when it comes to this album, but that is just utterly shite. “Union Sundown” finds Bob complaining about how all his stuff is made in foreign countries rather than in the good ol’ US of A. I don’t like Bob Dylan the right-wing tabloid columnist – and it’s not because I care at all about the politics, it’s because he writes appalling, trite songs that make me cringe. Crap. The biggest crime of Infidels, however, is in what he left off it: one of his all-time best songs, “Blind Willie McTell” (you’ll find it on The Bootleg Series Volume 3 — in fact, that single disc is probably better than Dylan’s entire officially-released 80s output). 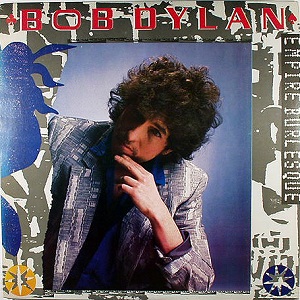 For reasons I’ve never been able to discern, this album frequently gets rewarded five stars. The backing singers are back. And so is Bob writing and singing love songs, purportedly to Elizabeth Taylor this time. Many critics bust out the “Best since Blood on the Tracks” line for this, but I don’t get the love at all. The production is extremely 80s, which is not a bad thing by itself, but Dylan sings in his worst voice ever here – often sounding somewhat like a stuffed pig. Some flashes of lyrical greatness – I mean it is Dylan after all – but in my view this is basically rubbish. Since there are those out there who give it the highest rating or just below, you’ll have to make your own mind up. For me this is Dylan’s nadir. The front cover says everything. 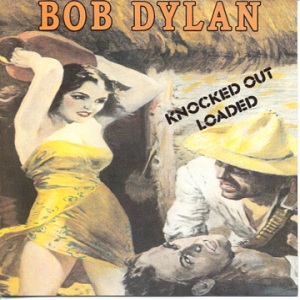 Those backing singers are still around, but rather than the gospel of the Christian albums or the disco-y stylings of the last two albums, this one has a grittier guitar-driven sound. The production is a little more muddied up than it has been at any time since Street Legal. He collaborates with the playwright Sam Shepard on the very long  “Brownsville Girl”, which is usually talked up as a classic. I find that it actually breaks the momentum of a fairly enjoyable and rock-y album. This is a little bit like a late-80s version of Self Portrait in that it’s a pick ‘n’ mix of covers and random songs written with various people. Tom Petty is another collaborator. I think it’s an improvement on the last couple of albums. Note: this is a very controversial opinion. Of all Dylan’s albums, Dylan aside, this one is usually picked out as the worst, and a little unfairly. It’s more or less Knocked Out Loaded Part 2, with a similar sound and a similar approach of covers and collaborations. I mean okay, his version of “Let’s Stick Together” is totally crap. But there’s some good stuff here. “Ugliest Girl in the World” is a fun little rocker and “Silvio” is really quite catchy and one of his more underrated singles. The rest of it isn’t that bad. At least it’s not toe-curling cringeworthy like Infidels. Make no mistake though, Bob has had a shocking 1980s so far. After two decades of unprecedented greatness, he’d fallen off a cliff by this point. And just when it looked like Dylan was down and out, he came roaring back with this minor classic. Produced by Daniel Lanois, this is a real gem of an album, and one of his most radio-friendly and accessible – it wouldn’t be a bad one to start with in all honesty. Dylan has a new mode of writing here that I can only describe as “list-based”. Thinking about it, I guess it’s the mode of “Hard Rain”. Here are ten songs that mostly riff on a central idea that is repeated again and again during the song. But it’s effective, and it gives Dylan great scope to show off his range of imagery. He’s always been good at that clinching one-liner that completes a rhyming couplet, and this format is almost custom-made to deliver said one-liners.. And we get tons of them here. “Political World” and “Everything is Broken” are the sort of political song Dylan should have been writing in the 80s. “Where Tear Drops Fall” has the best sort of 80s production and is not bad at all. “Man in the Long Black Coat” has a hint of the croakier voice that Dylan would develop in the next decade. “Most of the Time” is a great love song, and one of the more underrated of his career.  “Disease of Conceit” is a flashback to his Christian-era despairing at the state of society. “Shooting Star”, the closer, is a great little song as he catches sight of a shooting star and has some brief remembrances of any number of things:  Sara, his Christianity, who knows what else. It’s a song about a passing thought. In the great pantheon of Dylan this is only a “minor” album, in the same sort of class as New Morning, but it’s really good and I suspect it is one you’ll come back to again and again.