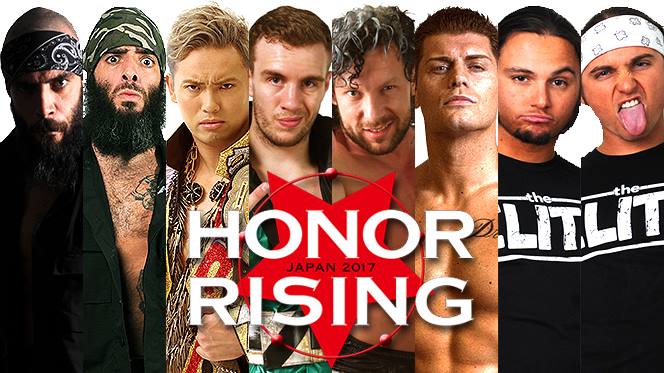 The second of two NJPW and ROH co-promoted shows sees Omega and Okada face off for the first time since Wrestle Kingdom in the eight-man tag main event, Adam Cole vs. YOSHI-HASHI for the ROH title, and Hirooki Goto vs. Punisher Martinez for the NEVER title. Let’s get to it.

Rick: Hey all. So, since Ioan was unable to watch the show live, I did most of the match body recaps today; kind of a switcharoo from yesterday.

Ioan: And I’ll be chipping in with my thoughts below Rick’s. Enjoy.

Rick: Young goes back to the well and cuts another promo, at least getting some boos this time. He and Jado attack before the bell; come on man, Kushida hasn’t even taken off his hoodie, you savage. Man, I like just about everything that Kushida does in the ring, including getting the crap kicked out of him, as Jado and Young go to town on him for awhile. Finlay gets the hot tag and does a nice sequence with Silas, but Young is able to hit Misery for the pin. Basic opening tag match. They really wasted Kushida on these shows. **

Ioan: I got nothing from this. Kushida and Finlay tried, but Silas Young and Jado were a profoundly boring pair. They were also mugging for the crowd’s approval for some reason, which was stupid. I came away from their two matches on these shows never wanting to see Jado or Silas in a wrestling ring again. *1/2

Rick: The more I watch NJPW, the more I genuinely think you could make a case that Naito is the best professional wrestler in the world. Great worker, yes, but he can just hold the crowd in the palm of his hand and his character forces everyone to react to him at all times. I really can’t think of that many other wrestlers who can do all the intangibles on the level that he does. For the ROH side in this match, Castle is of course crazy over because he’s Castle. He gets a shot at whoever the ROH World Champ is at Supercard of Honor this year, which is ROH’s show on Wrestlemania weekend. The biggest personal issue in this match is Taguchi and Takahashi and their feud for the Light Heavyweight title, and they do a fun bit with Hiromu escaping Taguchi’s ankle lock at every turn. Evil picks up the win with an STO over Delirious, and Los Ingos rip off Tiger Mask’s mask afterwards. This was fun. **3/4

Ioan: Fine. Way too much Delirious for my liking. As Rick mentioned, the main thread here was the advancement of Taguchi and Hiromu Takahashi’s issues ahead of their showdown on March 6th, and in that respect it was a success. Hiromu scrambled away in terror every time Taguchi grabbed his leg and it should make for a strong thread to their title match. **1/2

Rick: I feel like Jim Ross would be his glory calling a match with this many hosses. War Machine offers the Code of Honor, declined by the GOD. The Guerillas have indeed gotten a lot better, as some have said, as they work over Rowe. War Machine comes back and hit a pop-up powerslam on Tonga, followed by a Hanson tope. GOD manages a comeback, but Guerilla Warfare is stopped by Hanson. Rowe counters the Gun Stun and War Machine picks up the win with Fallout for their second win in as many nights. I like heavyweight tag wrestling if they’re up to it, and these guys were up to it. Color me shocked how much better the GOD are than I remember. War Machine cuts a promo after the match challenging for the IWGP Tag titles. ***1/4

Ioan: Despite stepping it up in recent months, I will admit that the Guerrillas still get next to no reaction on the way to the ring. Maybe it’s their music. Still, they’ve been getting a good response for their work inside the ring and that’s the important part. This was a good effort from everyone, and the post-match tag title challenge from War Machine was met with a very positive reaction. Whisper it, but as long the three-way tag title matches don’t become the norm, 2017 is looking like a much better year for the division. ***1/4

Rick: Standard six-man, mostly on the average side, but the big story for ROH watchers was Adam Page picking up the pinfall on Jay Lethal, which was sold by Kelly as a big deal. The Page push has been of some consternation to the ROH faithful due to his relatively bland personality and character, but it’s happening; everyone involved clearly sees big things for him, and he just recently re-signed with the company. This might end up being a bigger deal than one would think, to be perfectly honest. **3/4

Ioan: This one meant more for Ring of Honor going forward than New Japan, although I was relieved to see that Juice Robinson was able to wrestle after Silas Young smashed his nose yesterday. Perfectly acceptable wrestling. **1/2

Rick: Martinez dominates the early going, Goto gets a neckbreaker to take over after a slugfest. Martinez shrugs most of that off and hits a tope over the corner buckle which was pretty impressive. Back in and Martinez goes for the chokeslam, but Goto hits the GTR outta nowhere to pick up the win. Blech. I’m not sold on Martinez at all in ROH, and this match didn’t do much to sell me; they played the big/small dynamic okay, but that was about it. He can move in the ring, yes, but there’s not much substance to him as a wrestler. Mostly no-selling and roaring. Goto did what he could and there were some stiff shots, but I’m not buying. **1/2

Ioan: I was ready to mouth off for booking a big lug like Martinez in a prime spot, but this really worked for me. It was formulaic, sure, but done well. Not a fantastic match or anything, and it’s clear Martinez is a long way from the finished product, but he put in a good shift and the Undertaker-like dive over the turnbuckle was damned impressive. Goto slaying the giant gives him a decent boost, and overall I’d say it was a job well done. ***1/4

Rick: Yoshi picked up the pin on Cole at New Years Dash to set this up. Cole controls after they go to the floor as the crowd chants for Cole. Yoshi counters the Last Shot into a neckbreaker to slow Adam down a bit. Cole comes back with a Shining Wizard, but can’t put him away and Hashi gets a sleeper and a swanton for two. They had me for a second there. 2 Superkicks by Cole and the Panama Sunrise gets two for Adam. Hashi survives another Shining Wizard, but the Last Shot finishes for Adam. This was a good, but not great, match that the show needed. Hashi had a few hope spots, but this wasn’t like last year with Strong/Ishii, where it built to the point that Strong had nothing left and Ishii just won – this was more of a give and take match, and Cole got a clean pin as a result. Cole seems to be much more over than guys like Strong and Lethal ever were in Japan, as the crowd responded well to him here. ***1/2

Ioan: Cole obliging the stupid Tokyo smarks to whip Yoshi-Hashi “one more time” really rubbed me up the wrong way. Anyway, despite Cole’s mugging and the off-putting crowd dynamic, this was an evenly contested and well put together match that built consistently to the finish. I’m yet to see anything from Cole in Japan which suggests he’s anything but a midcard guy with a catchphrase, but we’ll see how the issue with Kenny Omega plays out. ***1/4

Rick: Oh, this should be great. Omega gets a total babyface reaction; as Ioan and Glenn were talking about in the comments section on yesterday’s show, he’s basically already a babyface at this point, which may end up putting the Bullet Club in an awkward spot down the road. Okada and Omega start off, because who else really could? Apparently not, though, as Okada wants Cody and dismisses Kenny to boos from the crowd. Hmmmm. The Bucks take over on Ospreay soon after, and the crowd is firmly behind the Bullet Club here. Will dives for a tag, but his teammates are yanked to the floor by the BC. More punishment for Will, but he finally manages to DDT Kenny and it’s hot tag Okada. He takes out the Bucks with a double flapjack, but Cody hits the Disaster kick. Everything goes to hell and everyone ends up on the floor, allowing Ospreay to hit a Space Flying Tiger Drop. Cody suplexes Will off the top onto everyone on the floor soon after, and we’re left with only Omega and Okada standing. They fight it out to the delight of the crowd, Omega goes for the One-Winged Angel, but Okada fights out. Man, when Kenny finally hits that move on Okada, the roof is gonna blow off the place. Triple superkick by the Bucks and Omega takes out Okada, and we get pure chaos afterwards with everyone hitting moves until Cody counters a cutter from Will into Crossroads for the pin. I thought this was a tremendously fun match, to be honest – it was basically tornado rules, but it never stopped moving and gave everyone moments to shine. Cody especially got a lot here, going toe-to-toe with Okada and getting the pin on Will. ****1/4

Post-match, Omega cuts a babyface promo promising that 2017 will be the year of the Bullet Club to send the crowd home happy.

Ioan: Hell of a main event here. A big, splashy, PWG-style melee, with all the nods, winks and highspots that go along with it, and as you would hope, Okada and Omega’s interactions came off like a big deal. I’m a little sour on Cody getting such a prime spot based on his name, especially since I don’t consider him to be on the level of the guys he wants to face off with, but okay, he got the pin here and I’ll deal with it. Just a really, really enjoyable twenty minutes of wrestling. ****1/4

Rick: Slightly better main event tonight, and I enjoyed more of the undercard as well; I think it was the better show in the end. Overall, the shows were better than last year, which is good for the relationship between NJPW and ROH.

Ioan: It’s nice that Ring of Honor get their moment in the Rising Sun, but from my perspective anyone worthwhile from Ring of Honor is usually making regular New Japan appearances already, and aside from Dalton Castle there was no-one I’d go out of my way to see. You also get Tokyo smarks doing American-style chanting in these shows, which I find deeply irritating. But that’s enough of my whining. The wrestling was largely solid throughout, the last couple of matches today were good and the main event – which I’d highly recommend seeking it out – was tremendous.

Thanks to Rick for joining me to cover these shows. You can find his reviews for Ring of Honor and 205 Live every week on the Blog of Doom. I’ll be back on March 6th to cover New Japan’s 45th Anniversary show, which is already looking like something special. See you then.