Happy new year one and all! As most of us emerge blearily from several weeks of excess, New Japan Pro Wrestling prepares for its annual January 4th spectacular from the Tokyo Dome. I’ll be reviewing the show on Thursday, but for those of you interested in watching but unsure as to what to expect, here’s a primer…

This is the biggest New Japan Pro Wrestling show of the year, with every NJPW title on the line. The show is headlined by Kazuchika Okada vs. Tetsuya Naito and Kenny Omega vs. Chris Jericho.

The event proper starts at 5pm JST (that’s 8am GMT, 3am EST, 12am PST), with the New Japan Rumble on the pre-show starting an hour earlier. More convenient for me in Cardiff than for those of you on the other side of the pond, but assuming you’ve not got work the next day, this is one show that’s worth staying up for.

You can watch Wrestle Kingdom live and legally on the NJPW World streaming service. It’s very good, costs roughly $8.50 a month and can be cancelled at any time. Here’s the English sign-up page.

There’s an English commentary option again this year, with Kevin Kelly and Don Callis broadcasting from ringside. AXS TV in the US will also be broadcasting the show in parts, starting this weekend, with Jim Ross and Josh Barnett on commentary duties.

Who? – Everyone who didn’t make the main show, plus some surprise old-timers.

Why? – The fourth annual pre-show rumble, in which entrants can be eliminated by pinfall, submission or getting thrown to the floor over the top rope. Previous winners Yuji Nagata and Michael Elgin both went on to challenge for the Intercontinental Championship.

Who? – CHAOS representatives Roppongi 3K are recently returned young lions Sho Tanaka and Yohei Komatsu. They are managed by Rocky Romero of the amicably-split Roppongi Vice tag team who faced the Bucks at last year’s event. 3K were surprise re-debutants at King of Pro-Wrestling in October, winning the Jr. tag titles at their first attempt.

I’m sure you’re familiar with the Bucks and their Superkick Party ways. The Jackson brothers, who are members of the Bullet Club and also the reigning Ring of Honor six-man tag champs, have largely been based in the USA the past year, continuing to build their empire.

Why? – Roppongi 3K won the Super Jr. Tag Tournament at Power Struggle on November 5th – the first incumbent champions to do so – and chose the Bucks as their Wrestle Kingdom challengers that same night.

Why? – A ‘Get Everyone on the Card’ match, but since this is a gauntlet match it should be less of a clusterfuck than all those names suggest. Bad Luck Fale & Co. won the titles just before Christmas, defeating Los Ingobernables de Japón as the payoff to an angle that stretched back to the G1 Climax tournament in August. Most of the guys deserve a spot on the card, but I’m especially pleased to see Taguchi, Juice, Sabre Jr. and Ishii here. 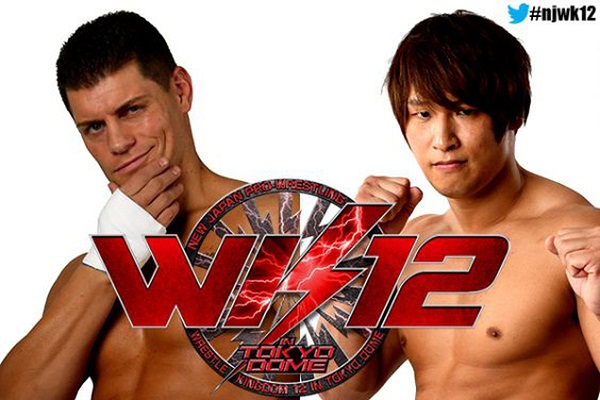 Who? – Having decided against joining WWE, Ibushi spent the early part of last year under the mask as Tiger Mask W, then returned as 100% Kota for a spectacular run in the G1 followed by a failed challenge for Hiroshi Tanahashi’s Intercontinental title.

In the twelve months since he made his in-ring debut for New Japan, Cody has grown into his “American Nightmare” persona, solidified his position as Bullet Club’s North American leader and was, until recently, the Ring of Honor champion.

Why? – Cody challenged Ibushi after Power Struggle in November, stating that he “needed” to face him. This was due to be for the ROH title, but since Cody lost it to Dalton Caslte, it is now a Special Singles Match – the winners of which tend to go on to challenge for a title of their choosing.

Who? – Suzuki-gun representatives Killer Elite Squad suffered a curtailed return to the company last year when Archer required back surgery, but since a surprise reappearance at the G1 Climax final they’ve been a force to be reckoned with.

EVIL has made a significant jump lately, defeating Okada in the G1 then challenging him at King of Pro-Wrestling, and while SANADA hasn’t stood out in the same way, he remains a stoically cool presence in the hottest stable around. I’m hopeful a regular run as a tag team is on the cards.

Why? – EVIL & SANADA won December’s World Tag League final by defeating the Guerrillas of Destiny and earned an automatic shot at Archer and Smith’s titles.

Who? – Minoru Suzuki returned to New Japan in thrilling style last January 5th, immediately challenging Kazuchika Okada for the IWGP Championship. Since then, his run has been a mixed bag, leaning towards disappointing, however there have been a couple of excellent exceptions.

The perennial nearly-man Goto was supposed to have shed that tag by defeating Katsuyori Shibata for this title in a great match at last year’s Wrestle Kingdom, but after losing the belt to Suzuki in April he’s again allowed himself to disappear into the shadows.

Why? – Suzuki has held the belt since defeating Goto, retaining it largely thanks to the help and shenanigans of his minions in Suzuki-gun. Following Power Struggle, Goto was denied another shot, but after pinning Suzuki during the World Tag League then offering to put his hair on the line, Goto’s challenge was accepted by Suzuki who agreed to do the same.

Marty Scurll (c) vs. Will Ospreay vs. KUSHIDA vs. Hiromu Takahashi

Who? – Current champion Marty Scurll – aka The Villain – made his NJPW debut last year as part of the Best of the Super Juniors tournament. He represents Bullet Club. Fellow Englishman Will Ospreay is one of the world’s finest high-flyers and represents CHAOS. Hiromu Takahashi is an endlessly evolving conundrum who has become a bone fide star since re-debuting in late-2016. He represents Los Ingobernables de Japón. KUSHIDA is a technical master and an honourable babyface, but can match any opponent for aggression when it’s demanded. He represents all that is good and pure.

Why? – Scurll became the second-ever British Junior Heavyweight champion by beating the first-ever British Junior Heavyweight champion, Will Ospreay, at Power Struggle. Ospreay had finally beaten KUSHIDA in New Japan (fourth time lucky) to claim the title at King of Pro-Wrestling a month prior, while KUSHIDA, overcame humiliating losses to score a win over Hiromu Takahashi at July’s Dominion. Finally, Hiromu scored a win over Scurll in the course of the Best of the Super Juniors tournament in May. So, yes, everyone has a valid claim at a title shot and so we get the first four-way match in New Japan history. 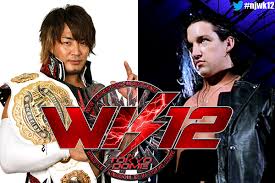 Who? – Tanahashi, the former Ace of the Century, passed the torch to Okada and Naito at successive Wrestle Kingdom shows and looked set withdraw to the midcard. The likely career-ending injury to Katsuyori Shibata, however, meant that his services as a big name were still required and of course he rose to occasion whenever it was required. In spite of a partially torn bicep and a recent knee issue, he remains one of the most reliably excellent wrestlers around.

Jay White was a product of the New Japan dojo before being sent on excursion to Ring of Honor, where he was based from mid-2016 until his surprise return at Power Struggle on November 5th. He is an unknown quantity as far as character goes – what I’ve seen of his work in ROH demonstrates his in-ring improvement, but a match against Tanahashi is a major step up.

Why? – Since last summer, vignettes had been airing on New Japan shows featuring a mysterious and unseen figure dubbed Switchblade. He was revealed at Power Struggle when Jay White emerged after the main event and left the Intercontinental champion laying with his finishing move: the Blade Runner. He repeated the trick at the final Korakuen Hall show of 2017, but aside from that has not been heard from. Even so, by targeting one of the biggest names in the company his intentions are clear and, despite a low-key build, this is a massive opportunity for the young New Zealander.

Who? – Kenny Omega is the leader of Bullet Club, first-ever non-Japanese G1 Climax winner and inaugural IWGP United States champion. Despite an extraordinary 2016, last year may have topped it, with worldwide recognition and acclaim rained down on him.

I imagine you’re familiar with Chris Jericho. Grand Slam champion in WWE, where he’s been a regular feature since debuting in shocking fashion in 1999, he faced former BFF Kevin Owens at Wrestlemania 33 and was most recently seen on an episode Smackdown Live in late July. Both men hail from Winnipeg, you idiot.

Why? – Having vanquished Beretta in a defence of his US title at Power Struggle, Omega’s next challenger made himself known (following a countdown) via the video screen. It was none other than Chris Jericho. A genuine shock – comparable to his debut in WWE – and as memorable a moment as anything in the wrestling world last year. Fast-forward to December when Chris Jericho not only appeared on the video screen during the World Tag League final, but showed up in person and smashed Omega in the face with the title belt, leaving him a bloody mess. At a press conference the next day a bandaged Omega blindsided Jericho and a pull-apart brawl ensued. What began as an earnest “I’m the best” contest, dubbed Alpha vs. Omega by Jericho, had turned into a blood feud in the span of three interactions. The prospect of a WWE legend vs. NJPW’s hottest North American talent would’ve been enough to draw new eyes to Wrestle Kingdom on its own, but the build has been spectacular in its own right. 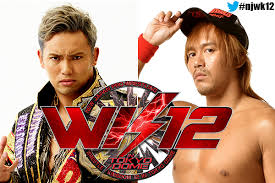 Who? – Kazuchika Okada had an awesome 2017. The Rainmaker defended his IWGP title against all-comers, surpassed Shinya Hashimoto’s single-reign record and on January 4th itself will break Hiroshi Tanahashi’s record for the combined number of days as champion. How’s that for timing? Oh, and he just turned 30.

Naito remains the insolent and disrespectful leader of Los Ingobernables de Japón and people love him for it. Last year he took out his frustrations on an unwanted Intercontinental title belt, cracking the face plate and generally treating the poor thing like garbage, but after losing said title he refocused and set his sights on winning the G1 Climax – an honour he duly achieved. His undeniable popularity was reflected by being named Tokyo Sports’ MVP for the second year in a row, but while Okada is still a young man, this feels like now-or-never for Naito.

Why? – This same match took place at Wrestle Kingdom in 2014, but because of a fan vote the Intercontinental title match headlined above it. The then supposedly fan-favourite Naito lost and was humiliated by the experience, setting off an 18-month transformation into the Naito we know today. Four years on, and as the winner of the G1 Climax once again, Naito is automatically due a Wrestle Kingdom title shot. Okada successfully defended against Naito’s stablemate EVIL in October to ensure that shot would be against him, and since then has been able to stay once step ahead of Naito, niggling him constantly and trying to break the “Tranquilo” demeanour. He even choked him out with a new submission hold (the Cobra Clutch), until finally, at the last Korakuen Hall show of 2017, Naito managed to leave Okada laying and now goes into the match confident of overcoming the record-breaking champion and achieving his destiny.

Back on Thursday with the review. If you’re watching – enjoy! See you then.