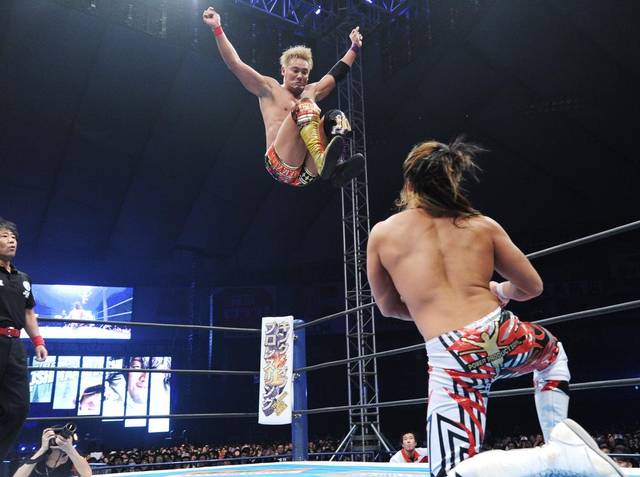 Welcome to the NJPW Top 10 Matches of 2016, or to give the piece its full title: Ioan’s Favourite New Japan Pro Wrestling Matches of 2016, Tinged With Guilt About Those That Didn’t Make The Cut.

A disclaimer to start. Clearly these are my Top 10 matches of the year, and even then I’d have trouble justifying why this ****1/2 match is more deserving of a spot than that one (Weren’t numbers like 11 or 13 invented for such occasions as this, when a self-imposed but arbitrary 10 causes so much angst?). Anyway, suffice to say I’m sure your own list will be at least 50% different to mine. And that’s fine. If 2016 has taught us anything, it’s that the opinions of others are to be listened to and respected.

There are a couple of obvious names missing here. Michael Elgin deserves praise for his tremendous run of matches during the G1, and multiple bouts against Kenny Omega and Tetsuya Naito throughout the year were very good. It’s a real pity that injury denied him another main event against Naito and a place on the upcoming Wrestle Kingdom 11 card. There is no spot for Katsuyori Shibata either, despite his matches with Ishii, ReDRagon, a very enjoyable feud with the 3rd Generation, and the beef with the boys from NOAH. He’d have every right to headbutt me so hard that his own head would start bleeding.

There are others, like KUSHIDA and Tetsuya Naito, whose contributions are harshly whittled down to one appearance, when both have had the best year of their careers to date and their matches from Invasion Attack alone could’ve easily made the list.

I’ve included the NJPW World link to each match (non-subscribers are currently able to watch the first two matches for free) and without further ado, here, in chronological order, are my Top 10 NJPW matches of the year…

It’s almost hard to believe this took place in New Japan earlier in 2016, and watching it again is a reminder of how much has changed in the wrestling world in under 12 months. This being a first-time matchup perhaps explains the slow start but, boy, did they ever find their groove in a hurry. Whereas everything else on this list is part of tournament or the start or end of a feud, this match exists in a bubble, the wider context coming from events outside the ring. And in hindsight, as a definitive goodbye to an era, this was quite the parting gift.

In the time since this took place, I’d somehow convinced myself it wasn’t as good as I thought watching live, and knowing it went 35+ minutes didn’t encourage me to revisit it either. But I did, and guess what? It’s fantastic. Well paced, everything’s earned, there are palpable shifts of momentum, and every move landed or avoided feels like a small victory. This idea that Okada no-sells the leg work is overstated; even after delivering The Dropkick moments before the end he’s clutching his knee, grimacing in pain. They’ve had better encounters, true, but it’s still a hell of a match and an immensely rewarding conclusion to a four-year feud.

Seeing as O’Reilly has since moved up to heavyweight, it’s unlikely we’ll see this match again in New Japan for a long time, so let’s hope Ring of Honor find a way to make it happen, because these two have incredible chemistry. The running knee from the apron countered mid-air by KUSHIDA into an armbar is an obvious highlight, as is O’Reilly grabbing his own trunks to block the Hoverboard Lock, but those are just two moments from a match full of fast-paced, impeccably timed wrestling. Truth be told, I preferred it to their tournament final match a year earlier. It was overshadowed a week later (see below), but it remains an excellent match, even if Vader didn’t see fit to bitch about it.

Will Ospreay vs. Ricochet

The most talked about wrestling match of the year. State-of the art stuff, including several spectacular sequences that arguably no two other wrestlers in the world could execute. What was missing from much of the chatter and critique was the context of this being a must-win tournament match. Athletic and acrobatic as it was, this was not an exhibition; the result mattered.

Will Ospreay vs. Ryusuke Taguchi

At this point Taguchi will always be working against his status as a lower card comedy wrestler, and that’s a real shame, because it means performances like this don’t get the credit they deserve. Taguchi’s ankle hold had been established during the tournament as a match-winner, and despite wearing an inflatable bird during his entrances, his in-ring approach was notably more serious throughout. Somehow Ospreay survived the hobbling and reached deep into his bag of tricks to pull off the win, capping an incredible two months(!) with the company. Seriously, watch this match.

Ishii can always be counted on in the G1 Climax and when CHAOS brethren meet in the ring they will most likely step up the intensity. What I particularly liked about this was that Ishii forced Okada to wrestle an Ishii match, not allowing him to dictate the pace or establish rhythm. That disruption of the usual routine made for a lean and surprising battle, a thread that was encapsulated in one of my favourite moments of the year; when Ishii interrupted the Rainmaker pose (not to mention the camera pull-back) with a huge, contemptuous chop. Beautifully done.

Precision timing to the second after thirty-minutes of escalating drama – yeah, these guys are pretty good. I feel like this and the January 4th match will be more highly regarded in a few years’ time, when the somewhat jaded response to this always high-quality matchup has worn off. A more self-conscious spectacle than Wrestle Kingdom 10, the closing stretch in particular was a joy to watch and had the crowd losing their minds.

The selling from Omega here was outstanding and the dynamic of two heel stable leaders desperate to outsmart the other was brilliantly done. Naito’s grin as Omega flipped out of a German suplex and tweaked his knee is just one of the dozens of little moments that add up to this being the best heel vs. heel match in recent memory. As characters and competitors they brought out the best in each other and it led to what I believe is the best match of both men’s careers to date. My favourite match of the year.

The closing sequence of this match is among the satisfying I’ve ever seen. Omega’s whole career in Japan – from DDT to Bullet Club to G1 Climax winner – distilled and signified by the use of four moves. Goto was no slouch, of course, and his equal contribution to a very good match shouldn’t be overlooked, but the occasion belonged to Omega. Over two consecutive nights he proved himself worthy of becoming the first non-Japanese man to win the G1 and I couldn’t have been happier.

Not that I’d intended it this way, but given how acrimoniously the NOAH/NJPW relationship ended, it seems my list is topped and tailed by matches that will almost certainly never happen in NJPW again. I had half a mind to include their match from the opening night of the G1, a match voted Best Bout by Tokyo Sports no less. The straightforwardness of Marufuji dominating Okada was compelling, but in hindsight it was the overture to… the stuff after the overture. This is the second half (or maybe “closing chapter”, considering their interactions in tag matches) of a story, but one that’s strong enough to stand alone. They continued the theme of Marufuji being a step ahead until the very last moment, when Okada resorted to using one of Marufuji’s own moves to help get the job done. NJPW > NOAH, for the meantime at least.

If you’ve been reading my NJPW reviews this year, thanks for doing so. It’s been a fun year to cover and the feedback and interaction make it all the more enjoyable.

I’ll be back with a Wrestle Kingdom preview in a week’s time. See you then. Oh, and in the meantime, why not enjoy all twenty five January 4th shows for FREE on NJPW World.