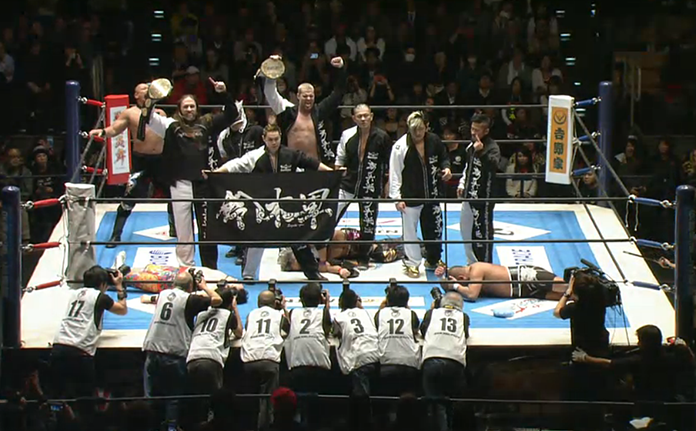 The post-Wrestle Kingdom special, in which there’ll typically be a bunch of title matches set-up for future shows and some big angle developments (last year saw Kenny Omega seize control of the Bullet Club, for instance). This is just gonna be a quick recap of the show – still recovering from the beast that was WK11.

Good little match. Triple submission spot from the legends + Henare, but the latter was isolated late on and Ricochet delivered a Shooting Star Press for the win. Post-match, Finlay hugged his mother. Aww.

Billy Gunn enjoyed himself here, while the crowd gave Tatsu – who is supposedly on the way to CMLL – absolutely nothing. Rite of Passage from Page to Tatsu for the win. Gunn stared down the big young lion Kitamura post-match. A match for one of the Lion’s Gate shows perhaps (assuming any more are happening)?

Lots of great, funny stuff here; the Bucks tripping over themselves and trolling everyone – including Broken Matt Hardy, Roppongi Vice’s fiery relationship flaring up again, and Baretta’s injured back being targeted. Cole’s Last Shot was countered into a small package by Yoshi-Hashi for the three-count and that’s a big win for him over the ROH world champ. He was beaten up post-match and you’d assume that’ll be a match at an Honor Rising show. Most enjoyable.

Omega vs. Norton to start! Omega tries to convince Norton to join Bullet Club because it’s just like NWO Japan, Norton Too Sweets Omega, but then crushes his hand. Then, Norton throws ‘Burger over the top onto Bullet Club, but they throw him back over! Magnificent. Oh, and Tiger Hattori’s the ref. The match broke down and somehow Cheeseburger ended up trying to chop Fale! Kojima with the lariat on Bone Soldier for the win. Everything about this was great.

Oh yes. Elgin did his best to end Kushida by throwing him onto the LIJ boys, but the former Jr. champ survived. Naito and Hiromu cheated transparently to take control, but Elgin fought back to tag in Kushida, who had a nice extended exchange with Hiromu. Elgin came back in to dominate Naito, who looked understandably shattered but a took a fair bit of hard-hitting offence, including a Falcon Arrow superplex. Naito’s response was to kick Elgin in the balls. And then Dragon Lee interfered taking out Hiromu (and himself) with a dive! Burning Hammer from Elgin to Naito! One, two, three! Post-match, Dragon Lee and Elgin stood over Hiromu and Naito, holding the IC and Jr. belts. Niiice.

Shibata vs. Ospreay to start. And whoa, Ospreay took it to him! Then Nagata and Yano faced off, which was a little different. “Break!” Honma came in and the match broke down, with everyone taking a tour around Korakuen. Okada’s taped up and has a gnarly bruise around his neck. Ouch. Ishii/Honma for a bit, then Ishii/Makabe, because apparently they don’t wanna take the night off. Juice wisely targeted Okada’s taped ribs, but the tag was made to Goto, and after we cycled through everyone Shibata delivered the Penalty Kick to Goto and Juice followed up to pick up the win! Good on ya, Juice.

And then – OH MY WORD – Suzuki Gun are back! And they target CHAOS, with Killer Elite Squad taking out Yano. Okada tries to fight back and here’s MINORU SUZUKI! He drops Okada with the Gotch-style piledriver and challenges for the IWGP title. There were shrieks from the crowd when these guys turned up and they left CHAOS for dead. Huge.

When will people learn that You Can’t Suplex Nakanishi. Didn’t take LIJ long to turn the tide in their favour, mostly through the use of chairs. Taguchi made the tag to Tanahashi eventually, but Tanahashi was visibly struggling (i.e. selling the leg from last night). Nakanishi came back in for a back-and-forth with Sanada, and the latter nearly got the Skull End (dragon sleeper), but Tanahashi prevented it. Bushi came and hit the Codebreaker, but it was only good for a two-count. He got isolated shortly after and then Nakanishi hit the Hercules Cutter for the win! New champs! Man, EVIL can not keep hold of a title belt.

Final thoughts: Not a good night for Bullet Club or LIJ results-wise, but loads of stuff got set up (some for The New Beginning shows, some for Honor Rising, and some for Fantastica Mania, I’d assume): Goto vs. Juice, Hiromu Takahashi vs. Dragon Lee, Ishii/Yano vs. Killer Elite Squad, possibly Ospreay vs. Shibata somewhere (RPW?), YOSHI-HASHI vs. Adam Cole, Suzuki vs. Okada, Elgin vs. Naito. So, so much fun.