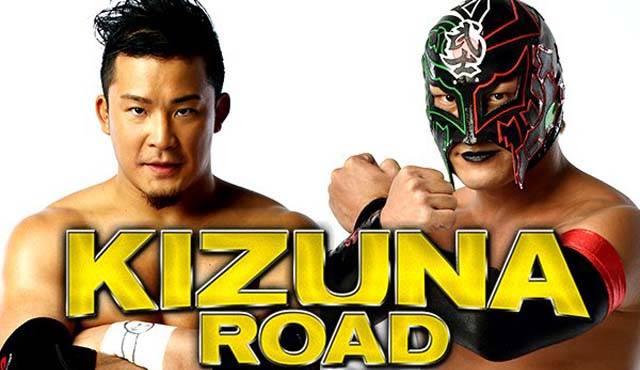 Ahead of the shows in the US this weekend, the Kizuna Road tour has been taking place in Japan. Three Korakuen Hall shows have seen titles defended in the main event and I’ll be covering those here.

Also on these shows, information has been released about the upcoming G1 Climax. Here are the blocks for the 19-date tournament which begins on July 17th:

Check out Chad’s thoughts on the blocks here.

Kushida and Bushi had a quick exchange before Sanada and Taguchi were in, with the latter directing traffic as his team took control in entertaining fashion. Evil tripped Juice on the apron to turn the tide and dreadlocked the American found his hairstyle used against him, but a jumping axe kick allowed the tag to Taguchi, who nailed a series of hip attacks until Evil super kicked him right in the ass. Bushi and Kushida returned, and though the junior champ’s initial flurry curtailed by Bushi’s t-shirt choke, Kushida recovered and Juice’s diving headbutt facilitated an armbar from which Bushi made the ropes. Back to the Future was blocked and Bushi’s swinging neckbreaker brought Juice in for a run of offence, culminating in a big crossbody to Sanada for two, then Sanada’s attempted Skull End dragon sleeper set up a parade of signatures from everyone, before our heroes scored the ass-based version of the Doomsday Device for two! Juice reversed Sanada’s frankensteiner to a falling powerbomb for a good near-fall, then they went back-and-forth with a slick series of counters, only for Evil to interject with a chair. Bushi nailed Juice with MX, took out Kushida with a suicide dive, and Sanada locked Juice in the Skull End, forcing the tap out. Los Ingobernables retain!

Post-match, LIJ continued the beatdown, leaving their opponents prone and setting up next week’s junior title match. A very good and very entertaining title match, all-action, no downtime, with Juice and Sanada the stand outs. ****

Yoshi-Hashi’s second was Kazuchika Okada, while Suzuki was joined by the junior contingent of his stable; Taichi, TAKA Michinoku, Yoshinobu Kanemaru and El Desperado.

After a couple of minutes of hold-trading, Suzuki landed a bunch of open-handed slaps, and despite Yoshi avoiding the rope-hung armbar, Suzuki grabbed a knee bar over the apron and this preceded a beatdown in the crowd while the troops took care of Okada. A brief sojourn in the ring ended when Yoshi-Hashi was once again dragged to floor for more shenanigans, breaking the count at 18. To the crowd’s delight, Yoshi eventually landed a suplex and got rolling with a comeback, with a missile dropkick earning two. The swanton missed the mark, however, allowing Suzuki to hit a Penalty Kick for two, and some stiff knee strikes looked to set up the piledriver only for Yoshi to power out. He then twice looked like getting somewhere, but Suzuki-gun attacked on both occasions and Davey Boy Smith Jr. ran out to take care of Okada. Finally the rest of CHAOS emerged to even the numbers and clear the ring, leaving the two men who were actually in the match to slug it out. Suzuki brushed off strikes and floored his challenger, but Yoshi survived to land a superkick and lungblower, and this time the swanton connected! One, two, no! The crowd was rabid at this point and Yoshi cinched in the Butterfly Lock, dragging Suzuki to middle of the ring three times before the champion somehow reached out a foot to make the ropes. Suzuki desperately blocked Karma then countered a charge with a dropkick to put both men down. A flurry of slaps from Suzuki set up the Sleeper and he transitioned into the Gotch-Style Piledriver for the three-count.

Your mileage may vary with the Suzuki-gun involvement, but it certainly worked for the crowd and had them begging for their man to make a comeback. The closing stretch was strong, with both guys able to garner maximum reaction for fairly straightforward work, and thankfully they were left alone to wrestle for long enough that it felt like a true main event. ***1/4

The champion started strong, hip-tossing Bushi into an armbar, then controlling the match via armwork, and even briefly applying Cattle Mutilation. Bushi used his t-shirt choke to send Kushida outside, where he nailed a suicide dive and followed with a rope-hung apron DDT, and back in the ring he cinched in a chinlock and headscissors. Next, the STF had Kushida scrambling for the ropes, but he recovered to hit a springboard dropkick and the handspring elbow, then caught Bushi up top and flipped him down to the mat with a double-wristlock! Hiromu Takahashi was out for a distraction, but Kushida quickly got rid of him, then sent Bushi to the floor before hitting a tope con hilo! Back in, Kushida ruined Bushi’s arm with kicks, but the challenger blocked Back to the Future and hit a swinging neckbreaker. The referee was bumped (weakly), Kushida hit Back to the Future, and Hiromu was back out and slapped the mat three times! The baffled Kushida got to his feet and was kicked in the face before Hiromu crunched him to the floor with a sunset flip powerbomb from the apron. The count was broken at 19, but Kushida was done and Bushi’s Canadian Destroyer spiked him for a near-fall! Somehow Kushida blocked MX, turning it into an Air Raid Crash and both men were down.

They elbowed each other up from the knees, then it was slaps, and after Kushida resorted to a straight punch, Bushi fired back with the mist! Bushi Roll – two-count only! MX! One, two, no! Bushi went to the top-rope, but Kushida rolled-through and nailed Back to the Future for the win!

Post-match, El Desperado was out – he smashed a guitar over Kushida’s head and we have our next challenger. A much deserved title shot based on his Best of the Super Juniors performances. This was a good match, though not quite the equal of their tournament effort a few weeks ago. I’ll admit they got me with Bushi’s near-falls in the final moments, but before that I hadn’t felt like he had a chance and it didn’t seem like the crowd did either. Nothing to complain about, mind, the work was good and they built to a strong finish. ***3/4

I’ll be back at the weekend for the G1 Special in USA shows. See you then.