It’s all going to hell as cosmic-level war breaks out! The full truth of who — or what — Wraith is finally comes to light!

Picked because: It seems like it takes a lot longer than it should for new issues of this title to come out, but when one does it’s huge. All due respect to Geoff Johns, Greg Pak and Charles Soule for their work on the character in the New 52, but this is THE definitive Superman title of the current crop. Through Wraith and General Lane, Scott Snyder has presented us with some deeper philosophical questions about what it means to be Superman and what his role in the world is and should be. It’s also provided some huge action scenes, courtesy of the master craftsman and DC co-publisher Jim Lee. The highly detailed and stylized art from Lee combined with his other corporate duties probably has a lot to do with why this book suddenly couldn’t ship on time, but at least there hasn’t been a bad issue of it yet. With this issue, we’re finally getting Wraith’s origin story and not just from when he landed on Earth. Each issue has been epic and this one will likely be, as well. Although readers should be prepared for a lot of setup, too, since there’s only one issue in the series left after this. This is the preparation for the big blowout, extra-sized final issue. We can see the end of the line from here, but these last few twists and turns hold a lot of exciting promise. 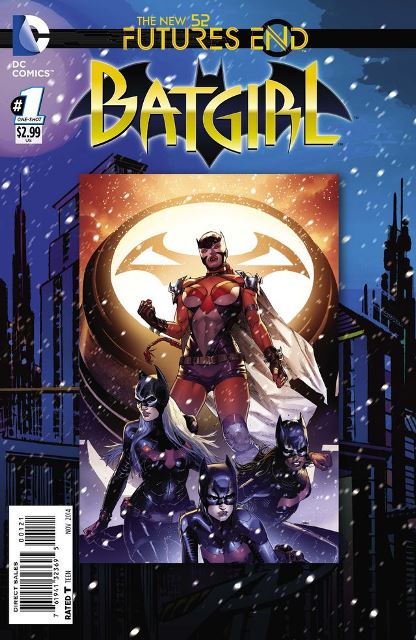 It’s five years later, and Barbara Gordon has become Bête Noire – a.k.a. The Black Beast! Part Batman and part Bane, she leads a squad of female agents through the Gotham Underground!

Picked because: It’s for real this time, Gail Simone is off Batgirl and this is her last hurrah with Barbara Gordon. While not part of her overall Batgirl run, this is likely to be an interesting story for those fans who’ve been enjoying Futures End. And it kicks off with Babb’s psycho brother, James Jr., crashing her wedding! The world of five years later is a vastly different one than we might have expected and when Batgirl goes dark and violent, the world takes notice. Gail Simone has written what many consider the definitive version of Batgirl, despite some reservations from those who wanted Stephanie Brown back in the cape and cowl (by reservations, I mean obnoxiously ranting on Twitter). As sad as it is to see Gail’s time come to an end we have the promise of a bright future for Barbara’s new creative team starting next month and the return of Secret Six in December, with Gail back on writing duties! 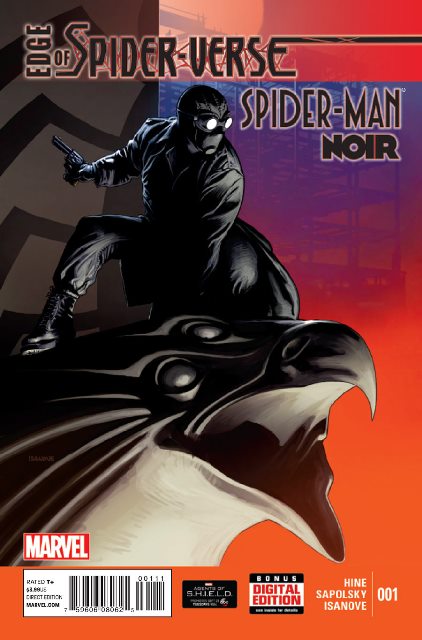 • The Peter Parker of the 1930’s finds himself not only up against Mysterio, but knee-deep in the Spider-Man event of 2014!

Picked because: The original creative team behind the first Spider-Man Noir is back and integrating the Peter Parker of 1939 into the Spider-Verse event. While big events have a tendency to underwhelm, Spider-Verse has gotten off to a more-interesting-than-usual start. Adding in (almost) every Spider-Man from (just about) every Marvel Universe is a *ahem* Spectacular idea. While the main story is playing out in the pages of Amazing Spider-Man and the lead-setup is wrapping up in Superior Spider-Man #33, this is a great way for those new to the Marvel multiverse to get to know the various other versions of the Wall Crawler. For those who read the original series, this picks up where it left off with some plot threads you might be familiar with. While the larger Spider-Verse story plays in the background, fans still get a Noir story first. If you never read the first series, give this a shot and get ready to become a fan. 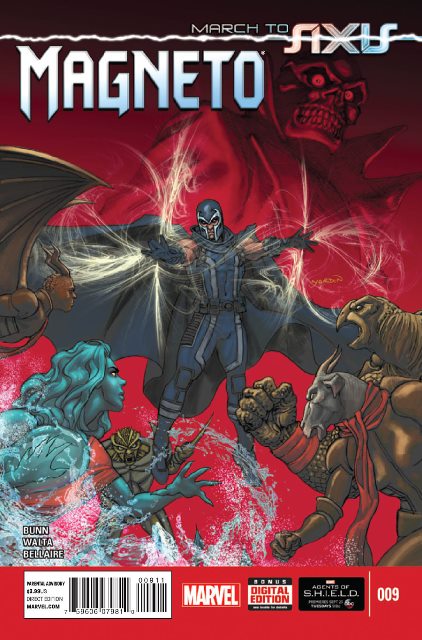 • When Magneto discovers that mutants are being hauled away to a re-education camp, he goes to investigate…

• And when he discovers that the RED SKULL is behind the operation—and in possession of the brain and powers of his deceased ally and friend, Charles Xavier, no less—Magneto becomes determined to shut it down!

• But can the Master of Magnetism overcome the Red Skull and his terrifying S-Men?

Picked because: Magneto sets his sights on Red Skull and the biggest battle this series has ever seen is poised to start here. AXIS looks to be paying off a lot of plot threads from Uncanny Avengers, so those who’ve been on that title should pick this one up, too. Really though, you should be on this book no matter what. Even if you haven’t read X-Men in years, this is still an incredibly accessible book with a simple premise: Magneto making the planet safer for mutants, one evil bastard at a time. And Cullen Bunn is an expert at writing villains who aren’t so villainous. He’s the current king of the anti-heroes (see also Sinestro, The Sixth Gun and the upcoming Lobo for more) and he wears the crown well. Cullen was, indeed, right for the job or bringing Magneto to the forefront of Marvel’s current solo titles.

Welcome to Copperhead, a grimy mining town on the edge of a backwater planet. Single mom Clara Bronson is the new sheriff, and on her first day she’ll have to contend with a resentful deputy, a shady mining tycoon, and a family of alien hillbillies. And did we mention the massacre? Writer JAY FAERBER and the art team of SCOTT GODLEWSKI & RON RILEY bring you this gritty 24th Century Western with an extra-long first issue for the regular price of $3.50!

Picked because: When a new title gets the seal of approval from Brian K. Vaughan (Saga, Y: The Last Man), it’s at least worth a look. He called it the “best Image debut of the year and my favorite new comic.” Taking elements from Firefly, The Quick and The Dead, Tombstone and Star Wars, this could be another huge hit for Image Comics. While the story boasts its grittiness, it also brings a sense of old-fashioned fun and adventure with a touch of mystery. It’s also great to see a new female protagonist title hitting the stands. Jay Faerber has been in comics for some time and has a couple of well-known creator owned titles at Image, but this looks to be his next and likely best breakout moment. While the setting and plot might feel familiar, it’s his ability to craft compelling characters that will put Copperhead above the competition. If you only buy one book this week, let it be this one!