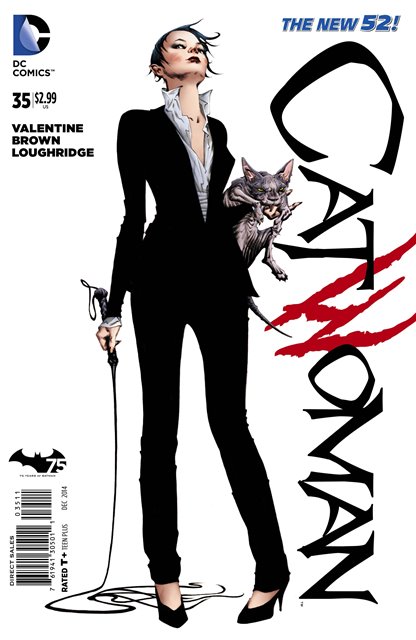 Meet Selina Kyle – Crime Boss of Gotham City! Spinning out of events in BATMAN ETERNAL Selina has accepted the family mantle and embraced her true criminal side, but is Gotham City ready for her reign? And with the Cat away, who’s the stranger haunting the empty rooftops of the city? Don’t miss the start of a bold new direction for Selina Kyle by the new creative team of novelist Genevieve Valentine and Garry Brown (Five Ghosts, Iron Patriot).

Picked because: Catwoman has been one of those New 52 titles that struggled for direction. The opening arc from Judd Winick was actually pretty good, but it went off the rails with Ann Nocenti. Now, newcomer Genevieve Valentine is taking the reins and using the developments from Batman Eternal as her basis. Remember the crime boss Selina Kyle from Batman #28? We’re finally going to see her in action here as this issue takes place (like all of the Bat-Family #35’s) after Batman Eternal has ended. In a recent issue of Eternal, we saw Selina embrace her family heritage and assume control of a prominent Gotham City Crime Family. It’s an interesting choice for the character and one that allows exploration of her criminal side and her humanity. She’s always been a character that skated the line between vigilante and criminal and now she’s going to blur that line even further. Gary Brown’s gritty style is quite fitting for a book that’s all about the mob and other aspects of organized crime. It’s got an old-school noir feel to it that’s also reminiscent of Gotham Central. If Gotham Central was form the point of view of the cops in Gotham, Catwoman is taking the opposite approach and giving the criminals the spotlight. How does crime operate there with all the vigilantes running around? If anybody would know ways around them, it would be Catwoman. This book may have finally hit on a “purrrrrfect” idea.

When catastrophe strikes Arkham Asylum, where will Gotham City house the world’s most dangerous criminals, and when inmates are found murdered, what is Batman prepared to do in search of justice? Arkham’s madness comes home in ARKHAM MANOR! A bold new series brought to you by the mad minds of Gerry Duggan (Deadpool, Nova) and Shawn Crystal (Deadpool, Wolverine and the X-Men).

Picked because: Scott Snyder wasn’t kidding when he said a major status quo change was coming for Gotham City. This new series from Gerry Duggan and Shawn Crystal kicks off by showing us the destruction of Arkham Asylum and informing us that, at some point very soon, Bruce Wayne is going to lose his family fortune in the events of Batman Eternal (this book takes place after that story, obviously). The art on this takes a different approach as well, evoking the more animated/cartoon-like characters used in the duo’s individual runs on Deadpool. It’s an interesting approach, for sure, and one that is likely to appeal to a different audience from the usual Batman fans. If you enjoyed Superior Foes of Spider-Man, this just might be the book you need to try out next. Batman will have a presence, but this is about the Asylum and the inmates first. Think of Batman as a buffer to show how this book fits in the rest of the line. But from there, it’s all about its own story. Things are obviously not quite what they seem with Bruce’s “lost fortune,” especially if you’ve read Batman #35. The larger scheme at work here looks like loads of fun. 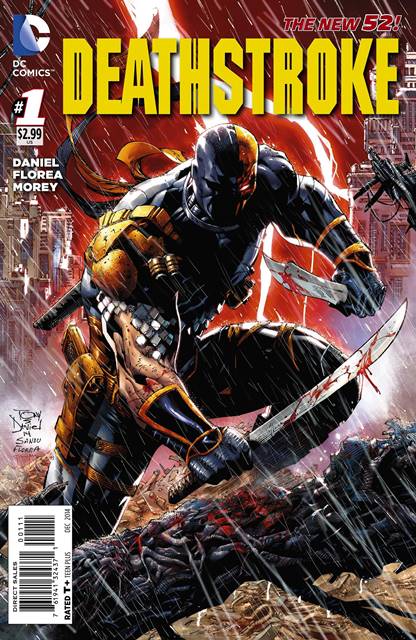 The DCU’s deadliest assassin stars in his own ongoing series by writer/artist Tony S. Daniel! See him as never before in this explosive new series, with one surprise after another as we see Slade Wilson in the fight of his life!

Picked because: This book represents a second chance of sorts for both Deathstroke and writer/artist Tony Daniel. The world’s deadliest assassin had his own book at the start of the New 52 (written by Kyle Higgins), but it didn’t last too long due to poor sales. The book wasn’t bad, but it didn’t catch on with larger audiences. Now, Deathstroke is hugely popular after a killer (pun) second season on the CW’s Arrow and Tony Daniel has taken some time away from writing to concentrate on his art. Daniel’s writing has been largely hit and miss throughout his career, but his art is almost always on point. With Deathstroke, he seems to have found a character and a story that he really wants to tell and tell his way. On top of that, the artwork for this title is already stellar! Get ready for the ultra violence and an anti-hero who might just make The Punisher look tame if he stays on this path. This is the kind of book Daniel should excel at: a no-holds-barred action-fest meant for those who can’t get enough of that fast-paced, bullets-and-blood, take-no-prisoners thrill ride. 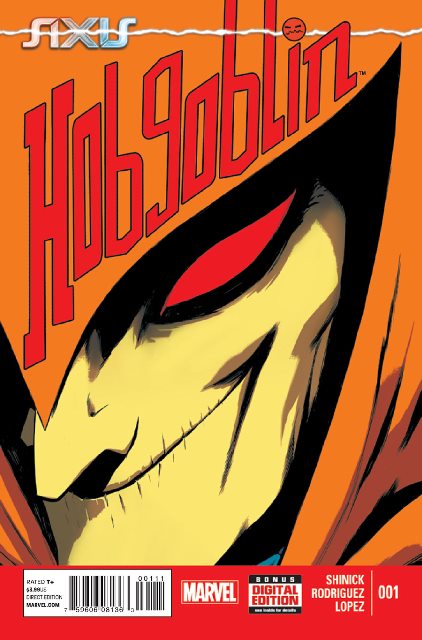 Art and cover by Javier Rodriguez
$3.99

Picked because: Part of the fun of an event like AXIS is cutting loose with the new status quo. Now that the bad guys are good and the good guys have turned bad, this is a great opportunity to do something over the top with a character like Hobgoblin. Hiring a writer known for his turn on Robot Chicken is a good way to make sure it stays fun while on this trip down the rabbit hole. Javier Rodriguez on art is just the ultra-sweet icing on that delicious cake. Good-guy Hobgoblin is going out of his way to help people and the new Goblin King (who has somehow not been inverted) is flabbergasted by this. Since Kingsley has made a fortune selling villain “franchises” to new players, why couldn’t this be somebody else under the mask? But, what if it isn’t? While this might have little or no bearing on the larger events of AXIS, it’ll be a way to keep things fun and interesting aside from the constant bombast of the main event. Time to turn up the fun level of this company-wide crossover. 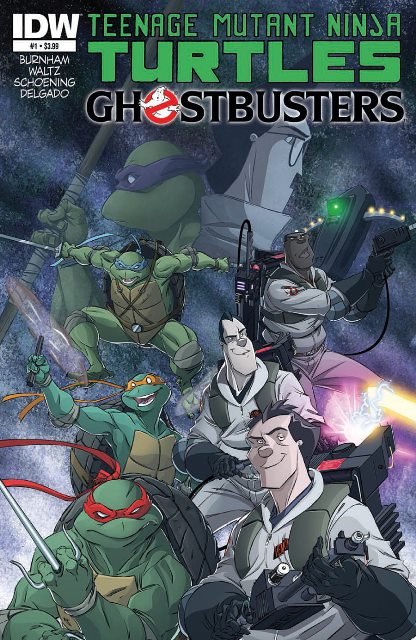 When a new invention goes haywire, the Turtles are sent to a whole new type of New York City. One with a whole lot more ghosts… and Ghostbusters! The two teams will have to learn to get along quickly, because a new foe from the Turtles past has followed them and aims to conquer NYC!

Picked because: IDW has made the most of their licensing deals in the last few years, turning out what are sure to be modern classics for Ghostbusters and Teenage Mutant Ninja Turtles (along with G.I. Joe and Transformers, too). This crossover will be the first time these two properties have worked together and it’s being brought to us by the team that made the ongoing Ghostbusters title so much fun. It could just be the crossover you never knew you always wanted. Taking a trip down nostalgia lane is fun from time to time and with the recent ending of the Ghostbusters title, those of you who were reading and enjoying that might want to pick this up so you can get your fix this month. And you might just decide to check out that TMNT title I mentioned earlier, too. Trust me, it’s really good stuff and will make you much happier than that movie from earlier this year.