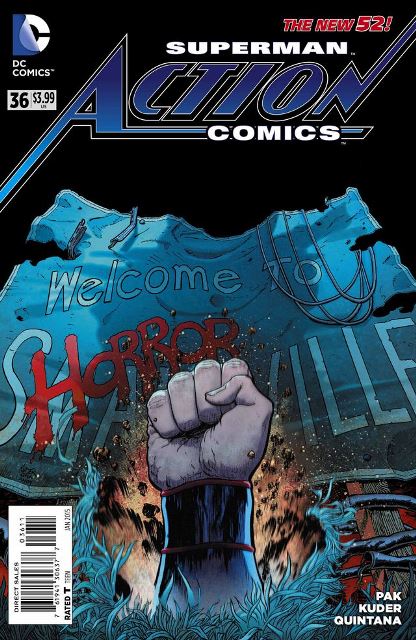 A new epic begins! The deck is stacked against Superman when Smallville is poisoned by the appearance of dark magic and ancient horrors! Can Superman figure out what’s going on and save his hometown before this evil epidemic spreads across the entire world?

Picked because: That Doomed business is over and we can finally get back to Greg Pak and Aaron Kuder telling a self-contained Superman story like they did at the beginning of their run. While Doomed was fine as an event, and even managed to be hugely entertaining at times, it drug on for far too long. That said, this creative team did some incredible things in the opening arc back at issue #26 and this new story looks to get back to that general idea by focusing on the Clark Kent side of Superman and his history in Smallville. Pak’s love of the small town, mid-western kid who found out he was essentially a god among men shines through in every page of his scripts. And Aaron Kuder captures a very human side of Superman that shows him as both incredibly heroic and deeply vulnerable. And the way this team has revamped Lana Lang is astounding! She’s easily the most fun supporting character Superman has had since the New 52 began. Her situation has changed a great deal since Doomed (now she’s dating John Henry Irons, aka Steel!), but no matter what she’s a believer in Clark. I can’t wait to see what this team has in store for us next. And for those who haven’t tried this out yet, this could be a good place to start. 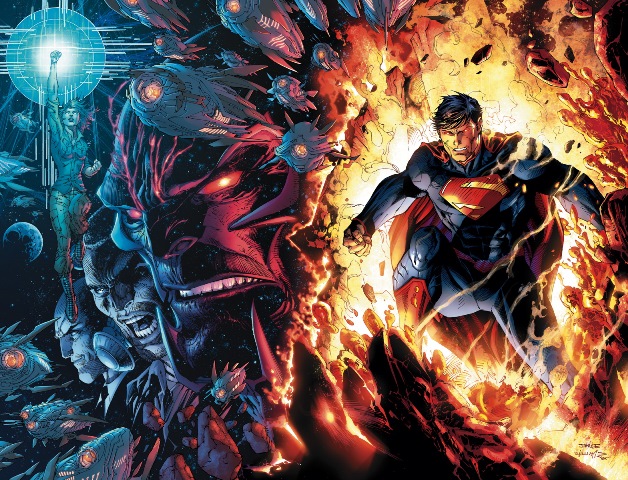 This is it – the extraordinary, extra-sized finale of Scott Snyder and Jim Lee’s Superman saga, surrounded by an epic wraparound cover! It’s a battle in the sun as Superman and Wraith accept their destinies…and Lex Luthor pulls the trigger on his ultimate weapon!

Picked because: Wow it has taken for-freakin’-ever to get this series finished. Granted, both Scott Snyder and Jim Lee are extremely busy people, but delay after delay has made some people forget this book even exists. That’s a real shame, too, since it’s THE BEST SUPERMAN BOOK ON THE MARKET! Honestly, I hate to see it end here, but I can’t imagine a different creative team coming in and making it as viable a title as this one has. And that it’s extra-sized means the series will be more like a 10-issue rather than just nine. Snyder and Lee are a great duo, but it’s clear now that Jim Lee’s publishing responsibilities have to come first and he shouldn’t be on a book that’s supposed to be monthly. If he takes on another project in the future, it should be announced from the start as a bi-monthly or quarterly title. We’ve already had a couple of really epic Superman vs. Wraith fights, but one more big one in space surrounded by an invading alien armada sounds even more fun! While I’m sad to see it go, I’m going to enjoy the hell out of watching this one leave. 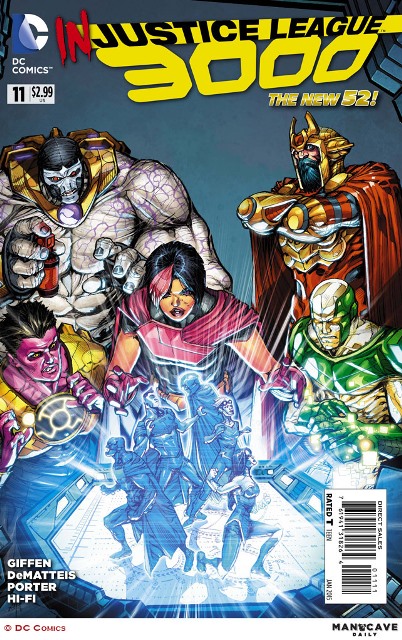 The Five have been defeated – but the Justice League has no time to catch their breath with the forces of Etrigan, the Demon massing for attack and the threat of the new Injustice League rising. Plus: a stunning discovery on Takron-Galtos!

Picked because: This title has grown by leaps and bounds over the course of the last 10 issues and has that old-school feel with a new-school twist. It’s not exactly the “bwhahahaha” era of the Justice League we remember from the writing half of this creative team, but it’s not far off, either. And with their versions of Booster Gold and Blue Beetle set to make their debut next month, it’s headed ever-so-subtly in that direction. What makes this title great is that it’s part of the New 52, without being directly part of the New 52. It takes place in its own dimension that follows the story line Giffen and DeMatteis started with their Justice League International run way back when. Turns out, that Earth has its own universe where things took a vastly different path from the main DC continuity. In the year 3000 of that Earth, we’ve gotten parasitic “clones” of the original Justice League who are quite different from their originals. And while the books is doing its own thing, it’s also one of the best meta-commentaries on comic book fan reactions ever! Giffen and DeMatteis pull no punches with anyone, not even the audience. This issue should act as a fairly decent jump-on point with the introduction of the new Injustice League. All other methods The Five have used to stop or recruit the League members has failed, so now it’s time to bring in those who stand the best chance of wiping them out. Exciting and fun stuff is coming! 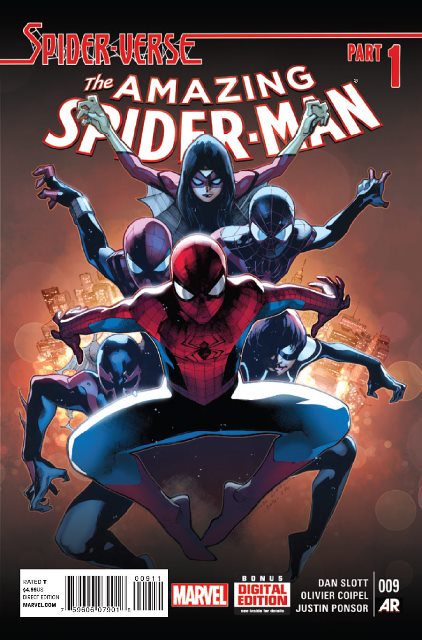 Art and cover by Olivier Coipel
$4.99

Picked because: We’ve had a couple months worth of Edge of Spider-Verse titles and tie-ins so it’s about time we got to the main event! That said, those Edge of Spider-Verse books were pretty great and you should go get all of them (especially issue #2, which introduced Spider-Gwen!). Dan Slott has crafted a lot of great Spider-Man stories in his tenure with the character, but this is easily the biggest and most expansive one he’s ever attempted. He’s incorporating nearly every Spider-Man from every Marvel Universe in their repertoire. And I’m getting one of my wish list items here with Olivier Coipel taking over interiors and cover art for the event! This guy is a beast with his version of Spider-Man and hopefully plans to stay on the title a long time. This is also the launching pad for a couple of new books like Spider-Gwen and Silk. Both will feature prominently in the main title for a while, so we at least get a chance to get to know them both a little better. Though Spider-Gwen was ready for prime time after just a single one-shot issue. This is where the ride really starts for this story, so jump on here if you’ve missed out so far. 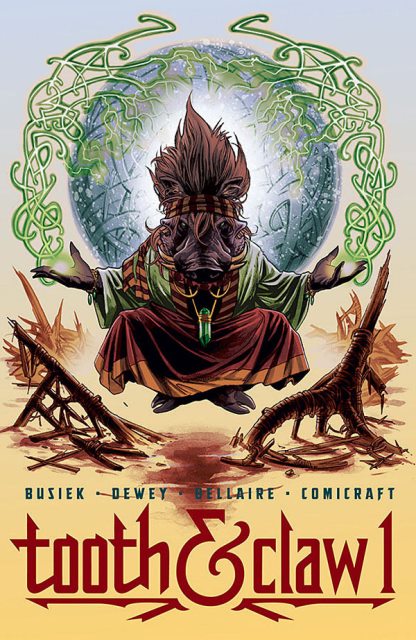 MARVELS and ASTRO CITY writer KURT BUSIEK returns to Image Comics with rising-star artist BEN DEWEY for an all-new ONGOING SERIES! Conan meets Game of Thrones meets Kamandi in an original high-fantasy epic for mature readers, as a secret conclave of wizards brings a legendary champion back through time to save the world, with disastrous consequences. The action begins in a spectacular DOUBLE-SIZED FIRST ISSUE, with forty-four pages of story with no ads for the regular price of just $2.99!

Picked because: Kurt Busiek is one of the best writers in comics and if you’ve been enjoying his Astro City, you definitely need to try this out. While it’s a fair bit different from that, seeing as this is venturing into apocalyptic fable territory over superheroes, this still has his signature style all over it and with some really great art. Image continues recruiting top talent and giving them free reign to do what they want with their own stories. Getting Ben Dewery on art was a nice pickup, too. He’s one of the best new talents in comics. This title looks like the one that’s going to finally break him through, too. I expect Marvel and DC to call him up with new offers, if they haven’t already. And while it may feature talking animals, this one isn’t for the kids. Like Conan and Game of Thrones, there will be blood and lots of it. And you really can’t beat getting a double-sized issue for the standard price and zero ads! That’s something else the Big Two should really consider doing with their first issues, too. It certainly makes for happy fans.

The touching story of a girl and her T-Rex… with a healthy dose of collateral damage and monster conflict on the side. When the scientists of Cosmos Labs punch a hole through time and space, they pull a ferocious dinosaur into the present. The dinosaur imprints on teenage Jessica, proving to be more mischievous than vicious. But he is not alone. Strangely mutated prehistoric monsters begin attacking our world. What’s a girl and her dinosaur-fighting dinosaur supposed to do?

Picked because: It’s Cullen Bunn writing an all-ages title about a girl and her…T-Rex. How could this not be a fun time? Both Bunn and artist Drew Moss have spent a lot of time doing more mature titles for most of their careers, so this is pretty major change of pace for both of them. And it looks like one that might be able to stick considering how much fun this first issue turned out to be. If your kids (or maybe you) have a fantasy about what it might be like to have a dinosaur for a pet, you need to pick this one up tomorrow. Robert Kirkman had a similar all-ages title called Super Dinosaur at Image a while back, but it didn’t quite catch on with most audiences. Where that one tried for this giant, sweeping story with a ton of moving parts, this one looks to keep things a little simpler and with a lead character who’s actually easy to root for and far less annoying than the SD protagonist. This coming out of Oni Press is another thing to take note of for those watching the business. This publishing house is attracting more and more big names to it these days, with this just being the latest big name creative team to bring them an original story. Looks like we’ll all be having a fun time at the comic shop this week!