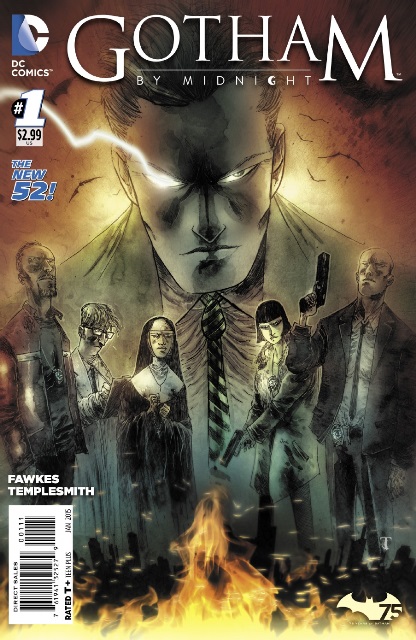 Art and cover by Ben Templesmith
$2.99

Strange doings are afoot in Gotham City! Look out, though – Jim Corrigan is on the case in this new series by writer Ray Fawkes (CONSTANTINE, BATMAN ETERNAL) and artist Ben Templesmith (30 Days of Night, Ten Grand)!

Picked because: Just what the world needs, another DC comic based in Gotham…but wait, this isn’t a run-of-the-mill Batman title…this one stars The Spectre! Well, Jim Corrigan, more specifically. There are many layers to Gotham City, including some that get deep into the supernatural. Batman can’t take on everything (shock!), so sometimes a different kind of character is needed to handle things like the undead, ghosts, goblins, demons and things that go bump in the night. Ray Fawkes has made a career of writing just such characters so this is perfectly in his wheelhouse. But it’s Ben Templesmith that more people should be paying attention to on this title. He’s a major pickup for DC Comics, especially given his history with titles like 30 Days of Night and Ten Grand. He knows how to set a mood and draw you in with incredibly stylized characters. DC’s going through a mild restructure in certain titles and families to diversify its lineup and this is clearly one of the standouts. If you’re into horror titles or you just want a good ghost story, this could easily be your favorite book this week. 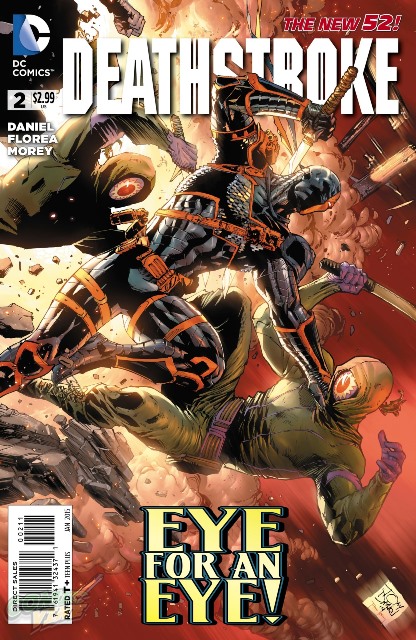 Slade Wilson’s entire life is turned upside down after he learns that his involvement in a top-secret mission was wiped from his memory. Now, a new, mysterious enemy known as Odysseus has targeted Deathstroke and everyone involved in the decade-old mission. With only fragments of his memories to work with, Deathstroke will have to see help from allies he thought long dead to fight the men who wish to reshape the balance of global power.

Picked because: Talk about an incredibly fun and sick first issue, Deathstroke #1 was one of the best books of last month! Tony Daniel kicked things off in spectacularly bloody fashion and took readers on one of the wildest and most gruesome rides so far in the New 52. And if any character should be written and drawn in such brutal fashion, it’s Deathstroke. He fully earned the title of “The Terminator” the first time around, but now things have dramatically changed for him and it might make him deadlier. No spoilers for those who haven’t read issues #1, but you really need to go get it. I’ve had my doubts about Tony Daniel as a writer, but it looks like he just needed to find the right character/story for him to come into his own. Check and Mate, sir! Any fan of The Punisher who hasn’t tried this out, needs to do so with this issue. Issue #1 had lots of action, but it only served to set up a little bit of plot. This issue is definitely going to move the story forward in a big way. DC has been diligently working to provide at least one book for every taste over the last year and it’s finally found one that should satiate those who like their comics with a little hyper violence, but without losing the characters at the center. And, c’mon, that Tony Daniel art is worth the price of admission by itself! 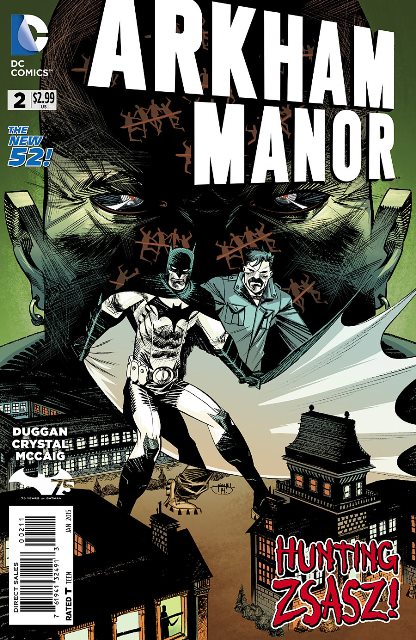 When Batman goes undercover in Arkham Manor, we learn just how important inmate Jack Shaw is to his mission.

Picked because: Last month’s Arkham Manor #1 was the best book of the month, for my money! Great setup, story, art, dialog…it was just the whole package. Gerry Duggan and Shawn Crystal are a dynamite team to have on a Bat Family title, especially one where they get to essentially forge their own path. This does have a small tie to one event from Batman Eternal, but it’s quickly moving on from that and focusing on a larger mystery. And that’s what makes this book so intriguing: it doesn’t spoon-feed you anything! And the cover teases that a classic Batman villain is about to get involved: Mr. Zsasz! I also appreciate how this story gives a good explanation for why Batman is operating out of a new base in Scott Snyder’s Batman, without giving too much away about that story. Since this one clearly takes place before that one, it’s easy to follow along. This title has already done plenty to establish itself as more than just another Batman title (something Batman: The Dark Knight failed to do) and with a solid story like this, is easily justifying its existence in the larger lineup. 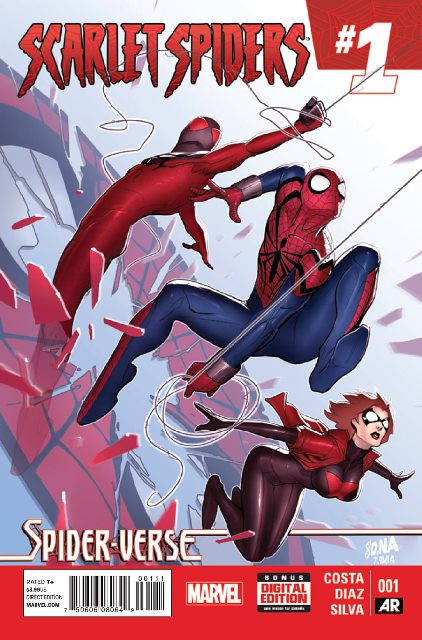 Picked because: Ben Reilly Spider-Man is back?!? Sold! It may only be for three issues, but this is an opportunity to remind people why Ben was just about the only thing most liked about the Clone Saga. As a Clone Saga defender, my road is a lonely one…but I digress. This story ties directly into Spider-Verse so its story flows directly from the main event in Amazing Spider-Man. Ben, Kaine and Ultimate Jessica Drew teaming up is all sorts of clone goodness (all are clones of Peter Parker from one universe or another) and makes for some fun natural comedy, too. Mike Costa has done a really great job with the G.I. Joe series at IDW, so there’s reason to believe he’ll do a fine job with this limited. As tie-ins go, this one might not be necessary to get the story of Spider-Verse, but it might be the most fun of all of them. Besides, it’s only three issues long so it shouldn’t hurt the wallet too much to add it for a little while. 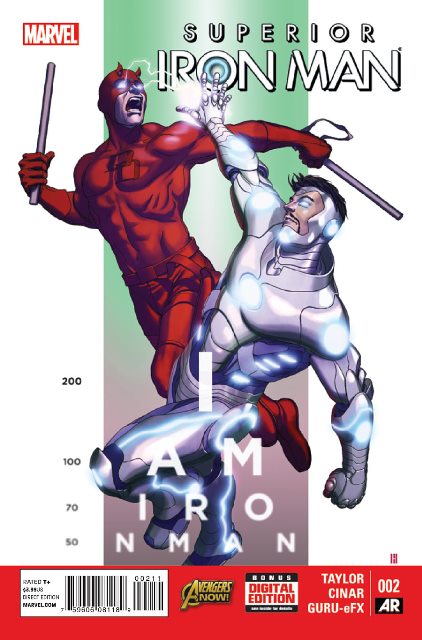 Picked because: Who knew it was possible for a Superior Iron Man to be an even bigger tool than a Superior Spider-Man?!? But issue #1 of this new series showed that he’s absolutely that and more. On the one hand, it was easy to see his overall points about making the world better, but on the other he’s still a self-centered egotist who can’t help but stick it to people he doesn’t like. Too bad that seems to be the large majority of people living in San Francisco. Daredevil only got a brief shot in the first issue, but he’s about to get in Tony’s face here so this should be really, really good! The new armor is different from what we’ve seen before, but it’s a logical next step for its evolution, though Pepper Potts does point out a huge downside to it: it’s part symbiote! Yeah, the alien creature that was Peter Parker’s black costume before it became Venom. Then there was a crazy moment at the end of the last issue that suggests maybe Tony’s not the only Iron Man out there…seriously, this is a crazy, fun title. Tom Taylor has hit it out of the park on the first issue, so make sure you get on this as soon as possible. This, along with the new Thor and All-New Captain America, proves the latest Marvel changeups are working beautifully. 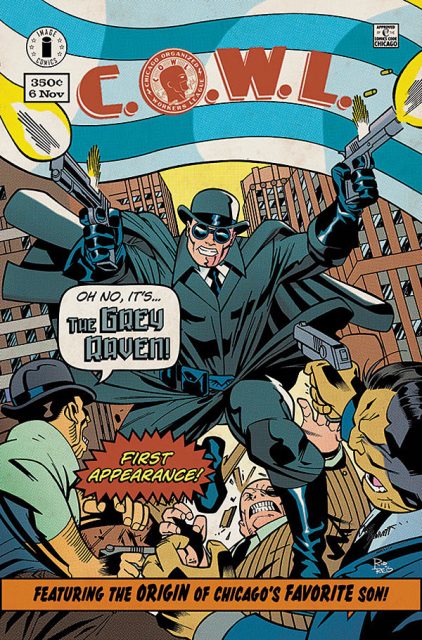 NEW STORY ARC! Before he started C.O.W.L., Geoffrey Warner fought for Chicago as the city’s first hero, THE GREY RAVEN! But what started him down the path of crime fighting? Witness the origin of Chicago Superheroes, the War Years, and the formation of C.O.W.L. as told in the sellout issue written by C.O.W.L reporter and comic book writer Randall Winters.

Picked because: C.O.W.L. has been one of the best new titles on the market for 2014 and it’s largely due to Kyle Higgins’ excellent story beats and the Rod Reis art. This issue gives us a look at the back story of one of the title’s major players: The Grey Raven. Elsa Charretier steps in on art to give it a more “classic” feel akin to what might have run in newspaper strips many years ago. Higgins has had free rein to develop this story as he sees fit, taking it directly from what would have been his final arc on Nightwing had the direction for Dick Grayson not been changed. This story has developed nicely under his direction and with this issue; it represents an easy jump-on point for those who were curious about giving it a shot. If you haven’t picked up the first volume of this series, the collected edition is out now and is relatively cheap, as Image first volumes tend to be. If you enjoyed comics like Watchmen, Sin City, Higgins’ New 52 Nightwing or maybe Spider-Man Noir, check this book out as soon as possible.