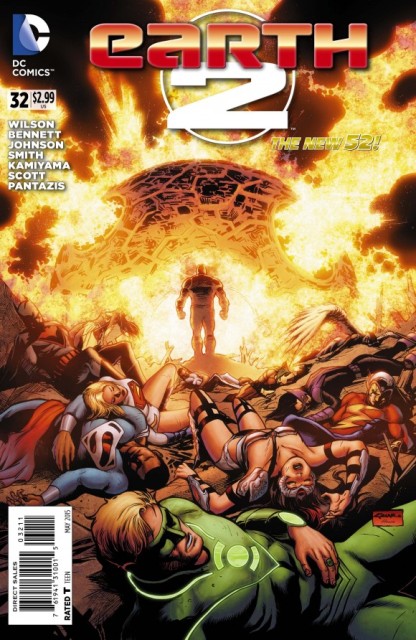 Earth-2 crumbles in the grip of Darkseid! Is this really the end of EARTH 2?

Picked because: While this can’t really be the full end of Earth 2 since World’s End doesn’t conclude for another four weeks, this is the final issue of DC’s longest-running second wave title. The book is being relaunched in June as Earth 2: Society with Daniel H. Wilson and Jorge Jiminez handling the creative duties. But what happens before that? The tease has been that this Earth is coming to an end and the survivors will occupy a new home, possibly on Earth-0 (New 52 main Earth). At least, that’s what’s suggested by the events of Futures End, although Convergence looks to tie both of these events together and create something entirely new when it ends. Entirely in the sense that the Futures End timeline no longer exists, but the New 52 continuity will remain without the New 52 name. Darkseid has been slowly tearing Earth 2 apart and working to assimilate it into his own dying planet, Apokolips. Lots of plot threads are coming together here as this will kick off the final push toward the end and Convergence. 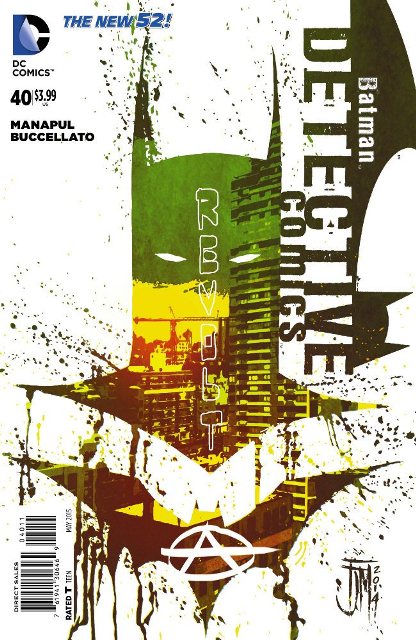 Anarky rules! Can Batman save Gotham City from itself?

Picked because: Anarky has taken his grudge against the Mad Hatter to a city-wide scale and used the idea of anonymity to get ordinary people to do horrible things. It’s a great story about the nature of humanity and has also been a great exploration of the relationship between Harvey Bullock and Batman. This takes place between the stories of Batman Eternal, so Commissioner Gordon is still locked up in Black Gate Prison, leaving Bullock to work some of the bigger cases on his own. There are several difficult questions proposed here, especially where the police role in protecting citizens is concerned. But the star of the show is easily the Manapul art. He may have gone for a more traditional style this time around compared to his Flash run, but it’s some of the most highly-detailed and iconic you’ll see this side of Greg Capullo’s Batman run. Detective Comics continues to feature DC’s strongest art talents from team to team.

THE AVENGING ARCHERS ARE BACK!

Picked because: Matt Fraction and David Aja have left some enormous shoes to fill after their incredible Hawkeye run. But if anybody is a perfect choice to step in, it’s Jeff Lemire. Fresh off his spectacular Green Arrow run at DC, Lemire is kind of the no-brainer choice for Marvel’s Hawkeye relaunch. From the early preview pages, it seems artist Ramon Perez has a similar approach to the part-time Avenger’s look as Aja did. Lemire’s approach is likely to be quite different from Fraction’s, though. Lemire will no-doubt want to make this title its own thing without a load of Marvel continuity weighing it down (something that made the previous Hawkeye so successful and fun), but the superheroics are likely to get turned up a bit. But don’t think he’s forgotten about the wit and charm that make Clint Barton fun to read. Where Green Arrow was about going to a darker and grittier take for the emerald archer, this is likely to be a kind of antithesis to that. Still a personal journey for Hawkeye, but likely a bit lighter than the GA run. 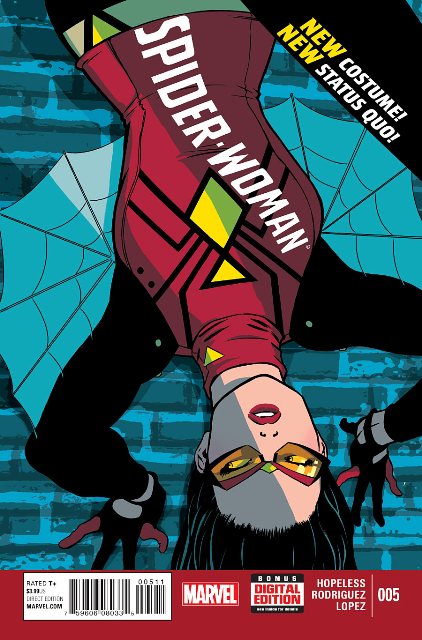 Art and Cover by Javier Rodriguez
$3.99

Picked because: Talk about a change in tone. Spider-Woman was heavily criticized from the start due to an art style that some viewed as sexist and overly provocative and a variant cover that nearly broke the internet for the same reasons. Now, just five issues in, we’re getting a reboot of sorts. Jessica Drew is trading in the trademarked ultra-tight spandex for something more practical to being a modern superhero and ditching the otherworldly adventures for a crime/detective aesthetic. Truth be told, this is a much more fitting style for the character. She’s been overdue for a revamped look for some time and this is as good as or better than could have been hoped for. And getting Javier Rodriguez to come in as the new series artist is just outstanding! Dennis Hopeless is continuing as the series writer from the first four issues, but not that he’s no longer tied into Spider-Verse, maybe he can forge his own path with the character and give us a much more entertaining title. Early preview pages have already suggested it’s going to be just that.

One young robot’s struggle to stay alive in a universe where all androids have been outlawed and bounty hunters lurk on every planet. A rip-roaring and heart-felt cosmic odyssey that pits humanity against machine, and world against world, to create a sprawling space opera from the creators of Trillium, Sweet Tooth, and Little Gotham.

Picked because: This is going to be huge, guys. The movie rights for this one were bought up before the first issue has even been officially published. It’s got a little bit of an A.I. thing going on, but is likely to be far more entertaining and focused given that it’s written by one of the best comic writers today. And let’s not forget the amazing art of Dustin Nguyen, who has worked on everything from Batman: Lil’ Gotham to the main Batman title with Scott Snyder and Superman Unchained’s backup stories. Lemire has done some incredible work at DC Comics from Animal Man to Green Arrow (Launching All-New Hawkeye this week at Marvel! See above.). He’s also written some of the best indie comics of the last 10 years such as Sweet Tooth and Underwater Welder. If you’re looking for some visually-gripping sci-fi adventure, this will be the book you have to pick up this week. Let’s go ahead and label it Book of the Week, shall we?