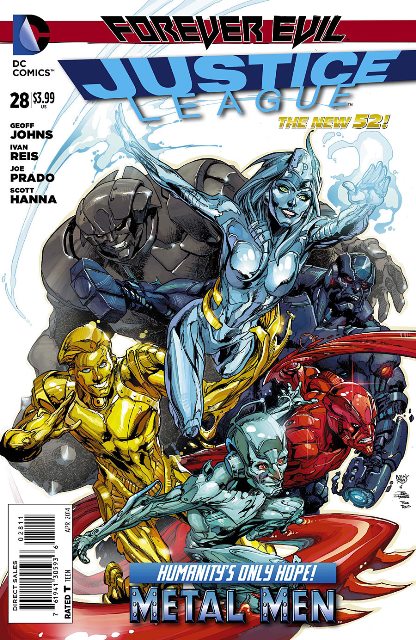 “FOREVER EVIL” continues! With the Justice League gone, new heroes continue to rise up throughout the DC Universe! The Crime Syndicate tried to kill him, but now Cyborg is back to settle the score — and with him are The Metal Men!

Picked because: The Metal Men are back, for the first time! We’ve only seen on member of The Metal Men prior to now and that didn’t go so well for the Justice League. But, of course, desperate times call for desperate measures. Cyborg has a new body and is ready to get back in the fight. But there’s no way he can take on the Crime Syndicate alone. Last issue was an amazing testament to how awesome Cyborg can be as a character when written the right way and this is likely to continue that trend. While we’ve had teases and one appearance of Will Magnus and his creations, we’re finally getting an origin story for them. It’s likely to be different from the previous version in some ways, but if Geoff Johns has proven anything it’s that he has a deep love of all DC Comics lore. And almost nobody out there draws Cyborg or The Metal Men better than Ivan Reis. He has truly captured the look that makes them all at once heroic and intimidating while not losing what makes them humorous and relatable. Forever Evil isn’t long from the end now so all of the tie-ins are being pulled in much closer now. Since this is a tie-in issue, it’ll most likely be about setting up for the major conflicts about to occur in the main Forever Evil title, but it’ll be the best kind of setup. And if this all goes the way I expect, this could easily be the strongest case yet that Cyborg should be the next hero to receive his own solo title. 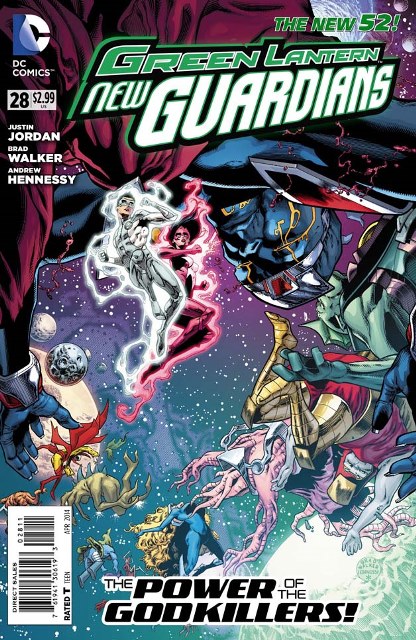 The fiery religion of the goddess X’Hal has brought peace to a star system that has only known conflict! Could this be the galactic paradise that Kyle Rayner and the New Guardians have been searching for? If it is, it won’t last long — because the mysterious beings known as The God-Killers have X’Hal — and Kyle — in their sights!

Picked because: Symbolism and parallels are something of a strong point for Justin Jordan. He’s done a fantastic job of bringing up interesting philosophical and moral questions for Kyle Rayner, the only White Lantern in the entire universe. And he’s been creating this cloud of romantic tension between Kyle and Carol Ferris that just about everyone can see…except Kyle, of course. Or he could just be playing dumb. Besides, what would Hal Jordan think? Of course, nobody except Carol and the Templar Guardians know Kyle survived the battle with Relic. This is probably a decent enough jump-on point for those who’ve been skipping this one, too. This book has also become the most disconnected of the four main Green Lantern titles. While the events in it will likely have consequences for all the Lantern titles down the road, for now it’s done a great job of forging its own path. This one’s likely to be asking a big question: what’s the price of lasting, sustainable peace? It’s an expansion of the moral dilemma from the previous arc, but from a different angle. Only this time it seems there’s another group out there who aren’t so keen on the idea of those claiming to be gods or those who wield god-like power. The artwork of this title is also easily the best in all of the Green Lantern line. Brad Walker does his best work in a cosmic setting with this title being no exception. He’s got a good handle on characters, but it’s his attention to detail when rendering constructs or designing alien creatures and worlds that really make it stand above lots of others. He really knows how to create some crazy layouts, too, but he doesn’t take it so far that it becomes hard to follow. If you haven’t tried this book out yet, pick up this issue. You might find your pull list expanding a bit.

Picked because: It’s not really the end, but this will be the issue when everything changes for Matt Murdock. As most probably already know, Mark Waid and Chris Samnee are continuing to tell the adventures of Ol’ Hornhead, but with more Marvel NOW! flavoring and a brand new #1 starting next month. But before we get there, Matt Murdock has to find a way to beat the white supremacist group, the Sons of the Serpent, who’ve infiltrated just about every level of New York City local government. And he decides to start by revealing his secret identity to the world! Given what’s happened over the last few issues, the time for subtlety is over. But what does this mean for the rest of the supporting cast? Foggy Nelson isn’t doing so well as his cancer treatments have continued and it’s very possible when Matt Murdock makes the move to the west coast next month, some of his friends might not be making the trip. It might seem an odd time to jump onto a series, but it might not be such a bad time to give Daredevil a shot, if you haven’t yet. This is going to be one of those “game-changing” issues that sets up a new status quo. And if you’ve seen how creative Samnee has been on the title so far, especially with the ideas around DD’s radar sense and the intricate layouts, you know his art does as much to tell the story as Waid’s writing. 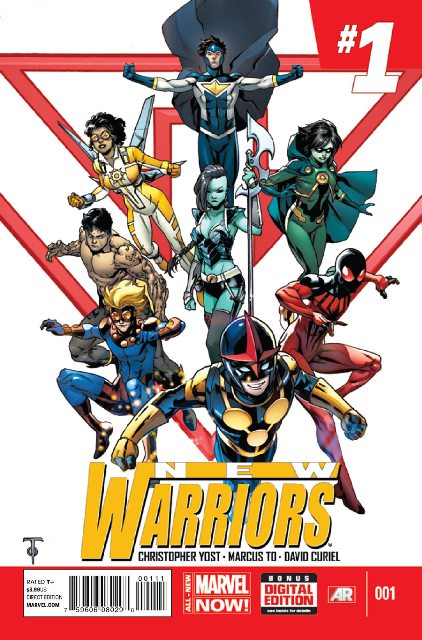 WARRIORS REBORN! Adventurers SPEEDBALL and JUSTICE have come together with a group of young heroes including NOVA, SUN GIRL, and HUMMINGBIRD (and even a couple of new faces) to stop the latest threat to the Marvel Universe—the Atlanteans, Inhumans, clones and hundreds of other so-called “superior” beings are living among the humans of the Marvel Universe, but not everyone is pleased about it. THE HIGH EVOLUTIONARY has raised an army to combat the evolution of humanity – and the New Warriors are locked in his sights!

Picked because: The rise of the new Inhumans is changing the layout of the current Marvel Universe and that means new teams are bound to form. With Young Avengers gone, a group of young heroes is sorely needed in the Marvel NOW! lineup. It’s hard to imagine anybody better suited to launching a new team book than Chris Yost. He’s done a lot of work for Marvel in the television realm, specifically as the lead writer for the short-lived, but much-loved Avengers: Earth’s Mightiest Heroes. He also had a killer run on DC’s sadly-not-around-anymore Red Robin (Yummmm!) series prior to the launch of the New 52. If anybody gets how to write younger characters that are fun for both kids and adults, it’s this guy. And he’s got Marcus To in…um…tow? These two have some history together as To was also the artist on Red Robin during part of Yost’s run. To has done some really great work at DC, but this lineup of Marvel characters seems better-suited to his strengths, which would work perfectly in the world of animation, too. If you’ve been looking for a good team book that just might show DC how to do a proper Teen Titans and/or Young Justice title, this one looks to be it. 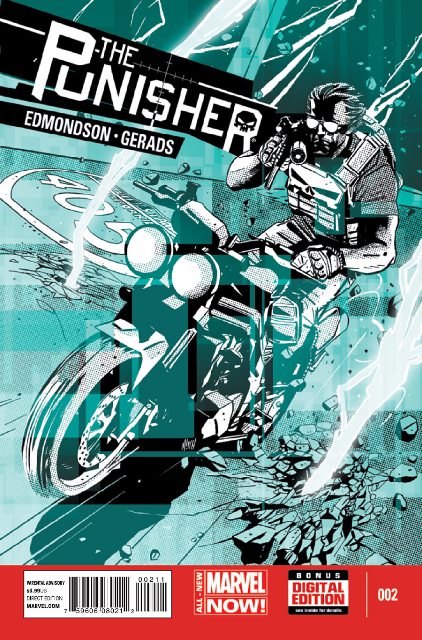 The Punisher #2 – Written by Nathan Edmondson
Art and cover by Mitch Gerads
$3.99

For years, The Punisher has waged a war on crime in New York City with an array of very large guns, but a lead on a major source of drugs, weapons, and more has set his many sights due west. NOW! Frank Castle’s in the City of Angels, looking to give the devil his due. Things aren’t all they appear, though, with a highly trained military hit squad hot on Frank’s tail. Caught between a posse of Punisher predators and targets of his own one-man-war, Frank’s manifest destiny may be a shallow grave!

Picked because: Issue #1 was a killer start for this new volume of Punisher…literally. When Frank Castle makes an impression, he really makes an impression. Fans who enjoyed the 2004 film that starred Thomas Jane, there’s lots to love here. From Frank’s dialog (or lack thereof) to the frenetic action scenes handled masterfully by Mitch Gerads. Nathan Edmondson is making himself into quite the go-to guy for solo action heroes at Marvel. He truly gets what makes Punisher fun to read as much as he gets what makes Black Widow an interesting character. While last issue was about making an impression, this one is about deepening the story. As we saw, there’s a new group of Howling Commandos in town and they’ve set their sights on taking down Frank Castle. Like that’s likely to stop him from killing every single drug dealer along the west coast. Of course, some questions still remain at the beginning of this story. But as things unfold, we’ll likely get some answers. But anybody who’s picking up a Punisher title is looking for some brutal action. If you’re hoping for more of that, you’re in luck! Make sure you go and get issue #1 if you haven’t yet. This is one of those books you’ll want to get in on from the beginning. 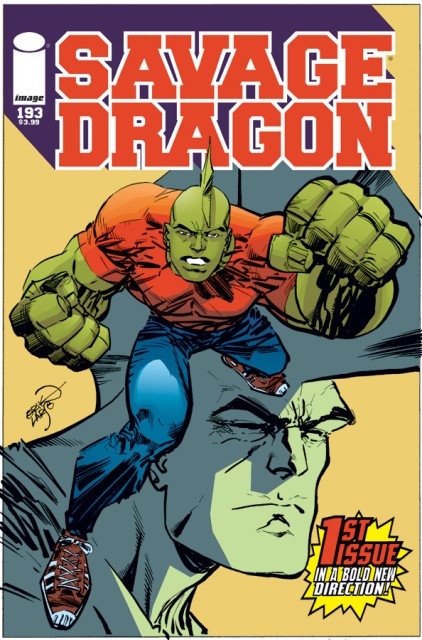 It’s the ultimate jumping on point for new readers and a bold new beginning as Malcolm Dragon takes over the title role from his famous father.

Malcolm Dragon is not your typical teenager. He lives in an apartment by himself in downtown Chicago, he’s a junior who’s just transferred to a new high school, and he’s trying his best to fill the shoes of his father, the Savage Dragon, fighting the forces of evil in the Windy City! New dangers! New adventures!

Get in on the ground level of a whole new SAVAGE DRAGON!

Picked because: Don’t let big numbers scare you away. Legacy characters are something of a rarity in comics today, so this is one of those moments fans should jump into. It’s especially great because Erik Larson is still the man at the helm. Who better to bring in a “new” Savage Dragon than the man who created him and has built such a rich mythology? While it’s not unreasonable to think that it’s only a matter of time before the original Dragon returns (this is comics, after all) for the time being, this is a chance to show the Big Two that it’s possible to pull the trigger on a legacy character and truly turn him into something great as he takes a famous role and makes it his own. This is also a good time for younger fans to give a classic a try. If you’re a fan of any character from Hulk to Shazam (Captain Marvel) this is a character you should check out. What’s old is new again!