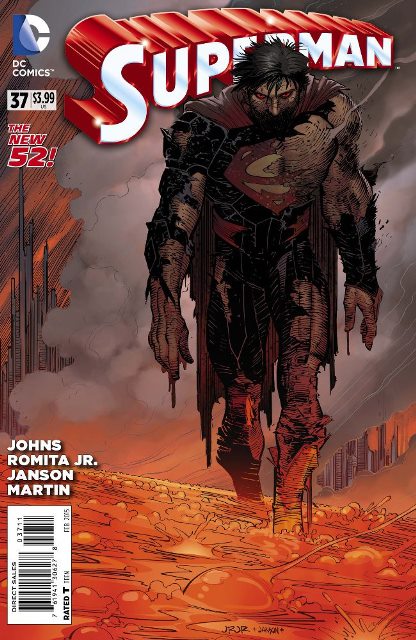 Can there be peace and good will toward people without a price? Geoff Johns and John Romita Jr. serve up some holiday shocks as they answer this question and more in this the penultimate chapter of “MEN OF TOMORROW”! And be warned – some significant changes are in store for the Man of Steel to ring in the New Year!

Picked because: Something massive is happening in this issue and it’s something that both Geoff Johns and John Romita Jr. have talked about for months: Superman is getting a new power! We don’t know what it is or how/why it will manifest itself, but ever since Ulysses appeared it’s been foreshadowed. Supposedly Superman will also get a new look just in time for the two-month break in New 52 publishing for Convergence. This story is about to wrap up and, no doubt, it’ll have a definitive ‘The End’ moment since we won’t have a new issue for a while, but it’s still going to leave us with some big ‘Holy #%@&’ moments, too. But let’s not forget about the deep character development and tough questions Johns has thrown at the Man of Steel since this arc started. Superman has been challenged before, but now he’s being hit with deep questions about the nature of right and wrong and free will vs. safety and security. And, if you’ve ever read a Johns story before, you know there’s a big story twist coming now that we’ve reached the next-to-last issue of this story arc. It’s so great to have quality Superman books again. 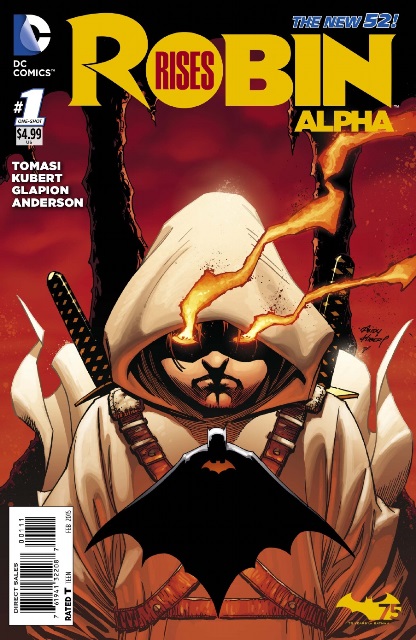 It all ends here! Batman’s been to the hells of Apokolips and back just to retrieve his son’s body.  But what has he brought back with him? And who is the new Robin?

Picked because: By now everybody should be aware that Damian Wayne is back from the dead and will be Robin once again. After Batman and Robin #37, which had a hugely emotional ending, what might be about to happen here? From some teaser images, we know that Damian is heading back to Apokolips to take on Darkseid directly in an effort to save his father’s life. Batman used a super powered suit called the Hell Bat (along with assists from Red Hood, Batgirl, Red Robin and Titus the Bat Dog) to recover his son’s body from the fire pits. The suit took a huge toll on Batman’s body and he’s at death’s door. While he hasn’t shown them yet, Damian came back to life with superpowers and at least one of them is super strength. We’ve all seen the pics of him punching Kaliback in the face, so there’s likely to be a lot of that. What are his powers? Are they permanent? What does this mean for the future of Batman and Robin? A lot of that starts here! 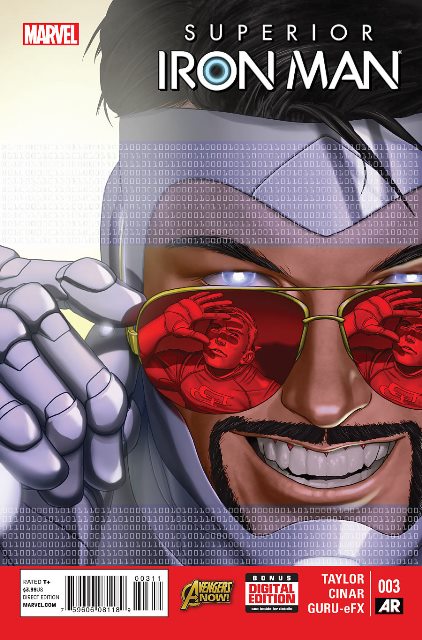 THE LAST TEMPTATION OF MATT MURDOCK

Picked because: Daredevil can see! Extremis has given Matt Murdock his sight back, albeit temporarily. How is he doing to react to this? What does this mean for Daredevil? Is Tony Stark really improving people to make the world better or to feed his own ego (and bank account)? This book continues to be one of the most intriguing pieces of the new Avengers Now initiative Marvel launched a few months back. Tony has always been kind of a jerk, but now he’s turned up to 11 and it’s getting worse. There’s so much to enjoy about this title and it’s been relatively new-reader friendly. I certainly didn’t read much of the previous Iron Man series before jumping into this and I only read a little bit of AXIS. Online synopses and Wikipedia can help a lot when trying to find out background information. These new solo series (like Thor and All-New Captain America) are so perfectly done it’s hard to ignore them. And that you can just enjoy one or all makes it even better. This issue won’t tie too heavily into Mark Waid’s Daredevil run (which is also coming to an end soon), but it is really interesting to see so many Marvel heroes moving out west and interacting with each other on new turf. It’s certainly made things fun and exciting again.

Picked because: Mark Waid’s Daredevil run has been one of the greatest comic book stories in history. He’s been writing the character since 2011 and it’s about to come to an end. This issue is an easy enough jump on point for those who’ve not tried it yet or those who may have walked away for a bit. Matt’s revisiting of his history as The Man Without Fear is a great way to introduce anyone to the character. Matt’s in the middle of writing his memoirs for publication (because everybody already knows he’s Daredevil thanks to the last issue of the previous series) and it’s producing some really hilarious scenes as the stroll down memory lane rolls on. But there’s still stuff happening in the present day. With his identity out in the open there are lots of lunatics from his old days who’ve come back out to give it one more try. And Chris Samnee’s art has been tremendous from the beginning of this series. His rendering of DD’s radar sense and his ability to make the quieter moments equally fun and expressive with a classical style are worth the price of admission by themselves. This run might be nearing an end, but there’s still a good bit of story to tell and it’s going to be fun all the way through. This is one of those books that is worth your money every single month, without fail. 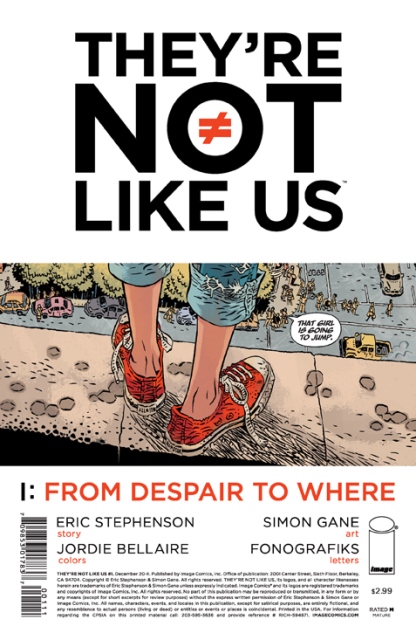 Eisner-nominated NOWHERE MEN writer ERIC STEPHENSON teams up with red-hot artist SIMON GANE for an all-new ongoing series! We all have advantages over one another, but what if you were capable of things most of us can only imagine? What would you do – and who would you be? A doctor? An athlete? A soldier? A hero? Everyone has to make a choice about how to use the abilities they’re born with… but they’re not like us.

Picked because: It’s already one of the best-reviewed issues of the year and it hasn’t even hit the shelf yet. The idea of some random person developing super abilities has been explored plenty of times in the past, but this one takes a decidedly “real world” approach and moves away from the superhero tropes because, well, this isn’t a superhero book at all. What would you do with that kind of power? Morale questions in comics usually get drowned out because of huge action and super hero tropes, but when that’s removed you get something much more compelling. The nature of humanity is that we all think we’re good deep down. But are we? They’re Not Like Us is a series that will challenge a lot of notions and have some really fun and interesting art to go along with it. Simon Gane’s art just brings this one home. He knows how to craft a comic that ebbs and flows in all the ways to keep you drawn into every scene. Image’s dominance of quality comics continues and that’s something we can all be happy for this holiday season.