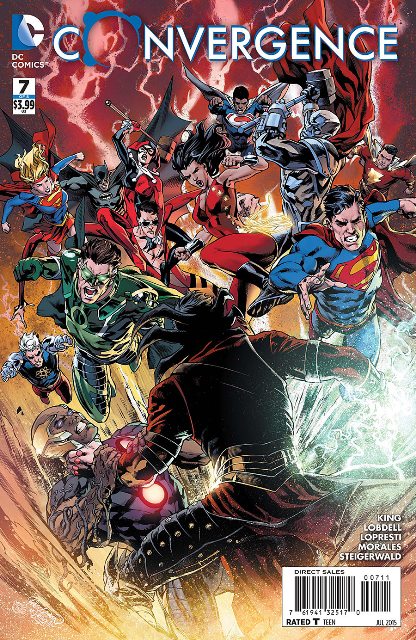 As battles go, it’s hard to imagine one bigger than the one we get in this issue. Lots and heroes and villains from across the DC multiverse duke it out for survival. The heroes of the New 52 Earth are watching the planet Telos invade their space from the Justice League Watchtower and there’s nothing they can do to stop it.

On Telos, Deimos and his assembled heroes and villains attack the unified forces of the Earth 2 heroes and their collective. It’s a fairly even matchup until Telos himself shows up to take on Deimos directly. The brisk pace from the last issue continues here and it’s made for a much more effective story. While it might be difficult to really connect with Telos or see Deimos as the biggest threat in the multiverse, it’s still an incredibly entertaining fight.

King and Lobdell together has actually made for a good team up. The script feels much more cohesive and there’s little wasted space. There are still a few moments here and there that feel a bit forced and even drawn out, but overall this series has picked up quite a lot since hitting its halfway point. Lopresti’s art is on-point throughout the issue, as well. From the big splash pages down to the moment when Parallax/Hal Jordan grabs Deimos’ wrist and demands they be released from the planet, it’s easy to be pulled into every little moment of the action.

Telos reveals the truth to all the heroes and villains that Deimos plans to kill them all and use the collective power of their deaths, channeled through the energy he already stole from the Time Masters, to remake the universe in his image. This turns pretty much everyone who followed Deimos against him and ultimately leads to Parallax/Hal Jordan obliterating Deimos. Which, as it turns out, was a bad move.

The sudden rush of Time Master and Death energy rushing out into the multiverse is causing reality to unravel. This idea is much closer to what Convergence was supposed to be from the start. It’s big ideas and crazy concepts that stretch the possibilities for DC Comics in all directions. It also gives the heroes of yesterday a chance to shine one last time. Or is it the last? All of these worlds are here now and they could easily find new life once this is all sorted out. With only one chapter left, Convergence has finally found solid footing. If it can hold on to the finish, it might just turn out to have been a worthwhile read, after all. 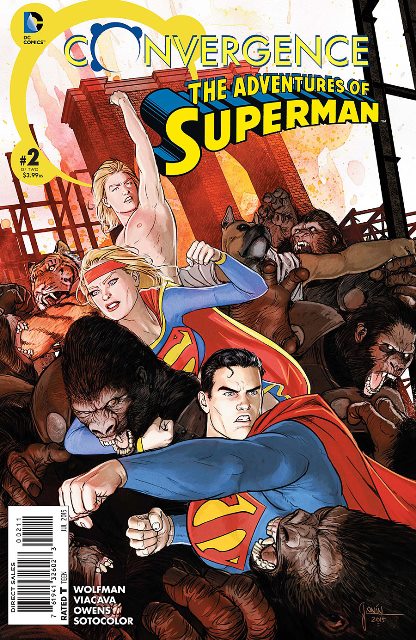 One of the best single tie-in stories of the entire event closes out in spectacular fashion! The Pre-Crisis Superman and Supergirl valiantly fight their way through the Phantom Zone criminals and we get a strong reminder why Superman is the hero we look up to when he nearly sacrifices himself to save his cousin. Of course, she knows her fate if they make it back to their Earth so she can’t leave Clark to the Zone.

Back in the Pre-Crisis Gotham, the ape army from Earth-86 is attacking in a full-out assault meant to kill everyone in the city. Superman, Supergirl and Kamandi meet for the first time and decide to work together to save as many as they can. There are some truly inspiring classic Superman moments, but it’s Supergirl’s concern for what happens to Clark that stands out. Wolfman gives her a great voice and genuine love and admiration for her cousin that it’s hard not to feel her inner turmoil. She’s keeping the truth of her fate from him because she knows he won’t do what has to be done if he knows.

If there’s one tie-in this week that reminds us why these characters resonate so deeply, it’s this one. Roberto Viacava’s ability to give us big action and beautiful, classic scenery would make Curt Swan proud. If you were missing the Silver Age Superman more than anything, this is a book you should pick up right now.