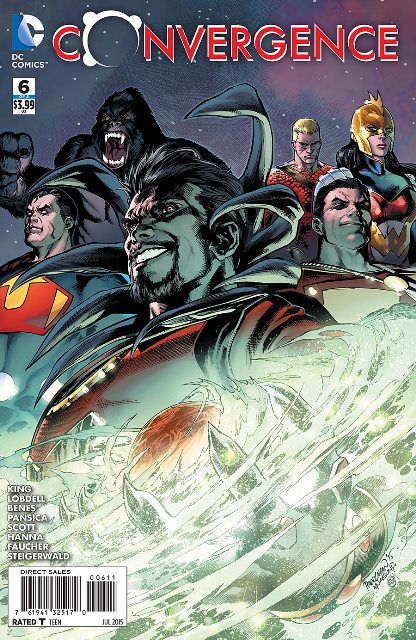 Business, as they say, has picked up! It only took six weeks but I can finally say I’ve read a really good issue of Convergence. Oddly enough it might be due to one of my least favorite writers in modern comics. Go figure, but Scott Lobdell actually brought something useful to the table. Or rather, he took something away.

Believe it or not, the useless narration boxes are gone! Not only that, Convergence finally made its way into the main DC (New 52) Earth universe. There are several callbacks to Lobdell’s Superman run and even a shout out to the short-lived Threshold series. Still, the moment is kind of quick and has little bearing on what actually happens, but it was a nice acknowledgement.

From there things are pretty much what we came for in the first place: superheroes and villains brawling! And brawl they do. The Earth 2 heroes head to the various cities on Telos to attempt building a coalition to take on Deimos, but they run into a bit of resistance. We see lots of classic versions of long-gone characters and we get a meeting of Flashes that’s just every bit as awesome as it should be. When they finish each other’s sentences, it’s just so perfectly pitched.

Things move along at a fast pace as the Earth 2 Jay Garick and pre-Flashpoint Wally West team up to recruit other heroes and the pre-Flashpoint Superman lays a pretty great hero speech on the Earth 2 Dick Grayson. It’s also made painfully obvious that Grayson is the center of this event. Of course, his role is really just making sure the wayward Telos decides not to destroy everything and everyone. Luckily, he was already pretty much onboard by the time Grayson finds him lurking next to some faux Stonehenge. It’s the one scene in the whole issue that’s a bit ungainly, but it was still necessary.

The final splash pages are really something to behold, though. Ed Benes really brought his A-game for this issue. His quieter moments are not exactly the most amazing thing you’ll ever see, but when it comes to big action few are up to this task. When the heroes confront Deimos with their newly-assembled hodgepodge of multiverse heroes, they find he’s got his own assembly of heroes and villains. Mostly from the Flashpoint universe and the classic Earth 3 Crime Syndicate and the Luthor-lead Legion of Doom. Although, there’s a few in Deimos’ camp that don’t make sense initially, especially the Superman and Wonder Woman of Kingdom Come. Although I suspect the events of Convergence: Superboy #2 might give some explanation.

The stage is set for a fight and for once Convergence didn’t feel like it was dragging its feet. Like Futures End and World’s End before it, Convergence looks like it’s going to finish strong after a slow beginning and meandering middle. Here’s hoping the upswing in quality continues and the narration boxes stay away. The issue was so much better for it. 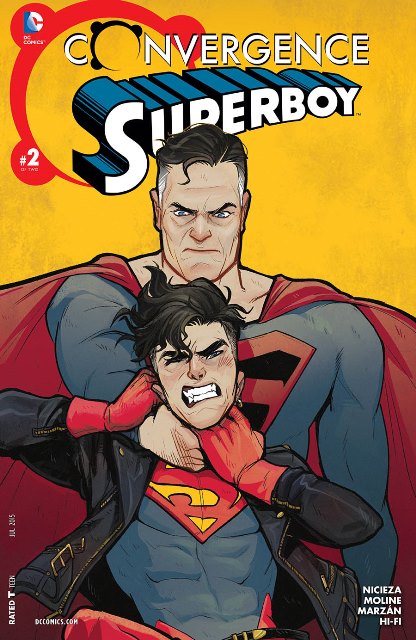 We got a pretty strong setup issue last month, but this month is all about the fight. Superboy takes on heroes from the Kingdom Come universe, most notably Superman.

For all the violence, there’s still a lot of great hero moments happening, too. The Kingdom Come Flash and Red Robin clock in more than a few saves while the Supermen duke it out. Though both of them wonder just how much is really being accomplished by the destruction. Each even pleads with the other to stand down and accept a loss to save more lives.

Karl Moline captures the classic 90’s Superboy style with ease, though his Superman rendering leaves a little to be desired. Then again, it’s hard to match Alex Ross on any day, so he should get a little slack. The moment when old-man Clark meets the younger Lois Lane is still one of the most emotionally resonant moments in all of Convergence, though and that’s largely thanks to the art.

When it’s all over, it seems the older Superman had a larger plan in place to get closer to the ones responsible for everyone’s captivity. That might explain his actions in Convergence #6. It was a great sendoff for a great character. The trip down memory lane isn’t far from the end now. 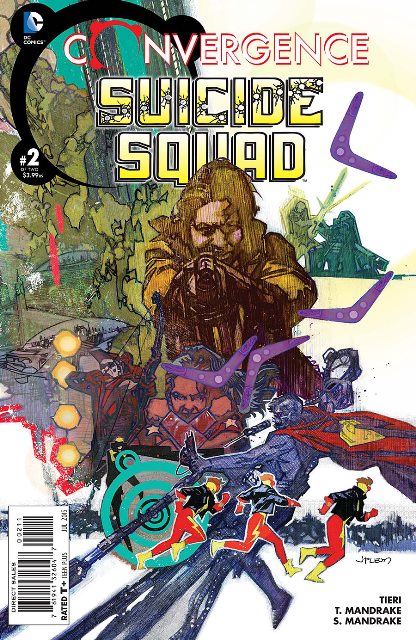 There’s nothing quite like a bunch of supervillains beating each other to a pulp. These villains especially. If you’re a fan of the classic John Ostrander Suicide Squad run, you really need to pick this two-parter up now.

The team heads to the Green Lantern-powered headquarters of the Kingdom Come Justice League and, with the help of that world’s Lex Luthor, makes it onboard. But of course there’s a traitor in their midst and a heavy-hitting welcoming party to deal with. As the fight goes on, pretty much everyone goes off the rails and begins turning on the team.

It could have been a jumbled mess, but it turned out to be a fun ride instead. Mandrake’s art finds its footing in that gritty style we’ve all come to expect from a good Suicide Squad story. The action is fast and furious and characters all get amazingly distinctive looks.

Like nearly all of the other Convergence tie-ins, this one is a sendoff to these characters. Unlike those other titles, this one has a more definitive ending. It works in the context of the story and the larger event, but it does feel like it could have gone on a little longer. That’s probably the mark of a good story; it made me want more. 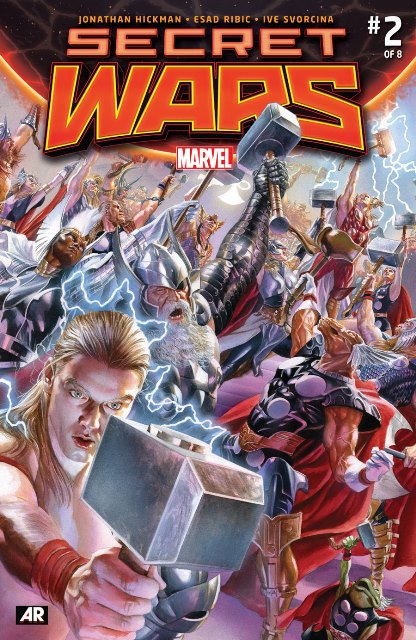 Welcome to Wester…er, I mean Battleworld! If you’ve seen Game of Thrones, you’ll find a lot of familiarity in the structure of this story and the politics of what the faithful call God’s Kingdom…or Latverion…or Battleworld. It’s all the same, so take your pick.

This chapter throws us headlong into the middle of the action. We see pretty much the whole first half of the issue from the point of view of a new Thor. He’s from the land ruled by who we know as Captain Britain, though the rules and identities of this world are a bit different. There are many Thors, for example, and they act as the police force of the entire world. They enforce Doom’s law. Oh yeah, Doctor Doom is pretty much god on this world. His law is absolute and his followers devout.

Although, there are those who defy him and are a bit resentful. This world’s Sinister certainly doesn’t find him very agreeable. When he’s accused of conspiring with another house against the House Braddock, he opts to trial by combat, facing off against his accuser. We also get introduced to many of the houses of Battlworld during this sequence, including one ruled by Apocalypse and another by Scott Summers and the Hellfire Club. As far as everyone on this world is concerned, this how reality has always been. None of the characters remember who they were before the final incursion. Doom fashioned himself as god and remade reality.

But something is wrong. The ship containing the Cabal from the end of issue #1 was pulled through time and space. And now it has been found by and archeological dig. There are those who see it as a challenge to Doom’s divinity and they demand it be kept hidden. But when it’s opened by the investigating Old Man Thor, the Cabal is loosed on the world and they want answers.

This was one seriously great issue with some of the best art of Esad Ribic’s career. While the parts with the Cabal might be confusing for newcomers, if you haven’t read all of Hickman’s Avengers run, this is still somewhat accessible as long as you have a working knowledge of the Marvel Universe. Seeing the world made in Doom’s image and all the various versions of characters showing up in new roles was an amazing sight. If nothing else, this could be taken as one of the best What if…? stories ever made. But it’s all that’s left of the Marvel Universe and if it stays this much fun throughout, it might be a real shame it has to end.

Even though I can gripe a bit about issues that spend their entirety in setup mode, it was necessary here and it helped establish some necessary story beats. Luckily, it was never boring and, for a double-sized issue, it read incredibly fast. This is going to be a fun ride!