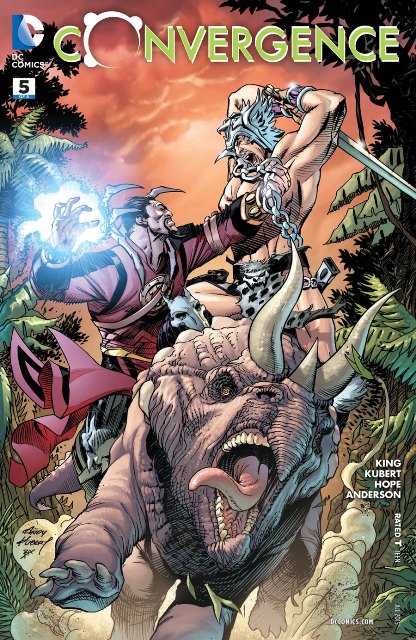 Written by Jeff King
Art and cover by Andy Kubert
$3.99

Now we’ve got a few interesting twists to figure out. Deimos has captured Brainiac using the powers of the confined Time Masters from various universes. But the reveal that Telos was once human was a bit of a surprise. The world of Convergence was once an Earth and Brainiac (in a similar manner to Marvel’s Galactus if you need a reference) found his herald of sorts in the man who would become Telos.

To keep it a little shorter this week, Telos remembers but is having trouble with it. The Earth 2 heroes determine that Deimos is the real villain here (if it wasn’t obvious by now) and launch into an attack. Deimos’ magic dispatches pretty much all of them to one degree or another. The largely inconsequential subplot involving Warlord ends with everyone dead, including Warlord. Deimos also reveals that he can see the future of everyone except Brainiac and decides to banish him once again.

After the whole castle comes crashing down and the team loses Yolanda, they regroup and decide they’re going to head to the other cities and try to unite them against Deimos. Flash goes back to try and find Yolanda and Dick Grayson (somewhat predictably) inscribes a Bat symbol on his chest. Deimos teases he has a different plan for the world of Telos and uses Brainiac’s occupation chamber to contact the other cities ahead of the heroes. He tells them all the fighting is unnecessary and that there’s a place for all of them in the new reality as long as they’re willing to pay his price.

When it comes down to it, this issue continued to elevate the quality of the overall series, but it’s still suffering from most of the same problems as before. The unnecessary narration boxes throughout just get in the way, the pacing kind of goes off the rails a few times and the entire subplot with Warlord is pointless.

But this issue also gets Andy Kubert on art duties and it looks stellar. The fight scenes are a real highlight as few artists render combat better than Kubert. And while the characters still don’t have strong individuality, Kubert’s ability to convey emotion manages to make them each feel unique.

There’s still a lot missing from this series and some of the developments don’t make a ton of sense in the context (why did Grayson suddenly decide he’s Batman, again?), but things have improved a little bit. If the upswing continues we might just get a half-decent ending. Nobody should get their hopes up about that, though. 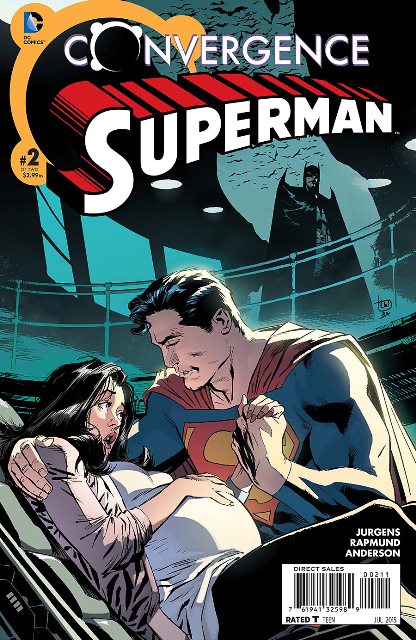 This one kicks off with the kind of fight that reminds us why the pre-Flashpoint Superman was great. He takes on the Flashpoint Universe Justice League and, with a little help from Jimmy Olsen, he manages to take them down. But Superman’s real strength is that he manages to get through to at least one of them and convince him to call off the fight.

Lois is on the verge of giving birth and the Kal-El of the Flashpoint Universe has kidnapped her because of a need to keep her safe. Lois died horribly in the Flashpoint story and Subject 1 (aka Flashpoint Superman) knew her as the only person to ever be nice to him. He does at least take her to the Flashpoint Batman who is a doctor. Around this time things do move at lightning speed to get it all wrapped up, but the closing moments are written and drawn so beautifully it’s hard not to get a little choked up.

Jurgens is a legend when it comes to Superman and he shows it here. While Lois doesn’t get as much spotlight as she should have, the last moment when the happy couple sees their son for the first time is beautiful. It was a great ending to one of the best Convergence tie-ins and a great sendoff to one of the best versions of Superman ever created. 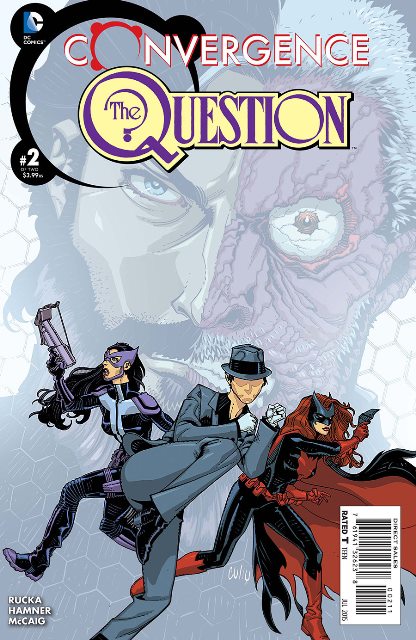 Written by Greg Rucka
Art and cover by Cully Hamner
$3.99

Even if it were for only a couple of issues, it has been so perfect having the Renee Montoya Question back. It’s like Rucka and Hamner never left. The trio of Question, Batwoman and Huntress continue their search for Two-Face as Renee’s father’s health continues to decline and he keeps asking for his daughter.

Two-Face is now obsessed with finding his other-Earth counterpart to get the trial by combat going, but not quite in the way most think. Meanwhile, we get a deep look at Renee’s relationship with both Batwoman and Huntress and it’s so perfectly rendered it’ll make you long for this to be a regular series again.

It’s hard to imagine anyone drawing Renee with more care and compassion than Hamner. Each panel just feels perfect. Like this was the book he was always meant to draw. As effective as he is with character work, the shadows are what add so much depth. But don’t let that fool you into thinking there’s no clever wit or well-timed comedy to be had in both the art and the script.

The ending is one of the best moments in the history of Montoya’s character and should not be missed. This is the strongest contender so far for best Convergence tie-in. 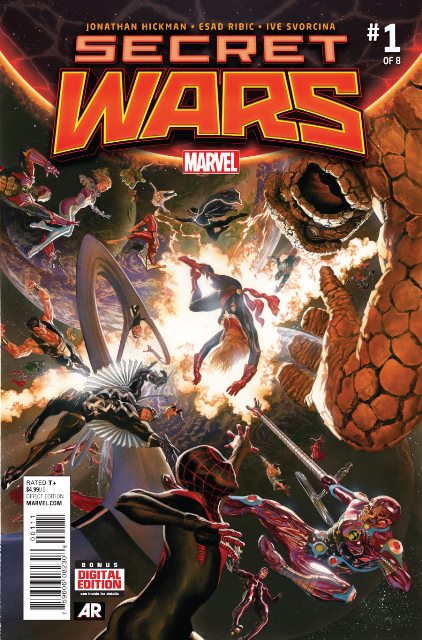 This is it! The Marvel Universe (616) collides with the Ultimate Universe and both come to a blinding end.

If you haven’t read Jonathan Hickman’s Avengers run or the most recent issues of The Ultimates, some of the events mentioned here will be massively confusing. However, Esad Ribic’s art is still going to blow your mind!

All the threads from the last eight months of Avengers and New Avengers converge and somewhat explode. The main story arc revolves around the two versions of Reed Richards making separate plans to survive the incursion. Ultimate Reed plans to end the other Earth while 616-Reed has been working in secret with his wife and daughter to build a kind of life raft that could save at least a few people.

The Ultimate Universe Avengers and SHIELD launch an all-out assault on the 616-Earth and it’s possibly the most destructive battle in Marvel history (that takes place on Earth anyway). Every team on Earth seems to have a plan to save it and they all implement it at the same time. Of course, none of it works.

While it seems like there’s nothing but death and destruction all around, The Punisher has a great scene with all the street-level criminals who’ve gathered to watch it all end. There’s not as much payoff for it, but it’s a great moment anyway with hilarious gallows humor.

The real point of all of this is to show that there was no escaping the incursion and no one does. As the worlds collide everything goes white and it’s for sure the end of everything. However, the final scene of a crashed ship hints at the possibility of some survivors.

It’s not likely there could have been a more action-packed and emotional final moment for the Marvel Universe. Only the epic styling of Ribic could have handled this story. His Thor: God of Thunder run should have made that clear.

It may seem odd to start a story at the end, but this one flowed perfectly because of it. While I haven’t finished Hickman’s Avengers run, I was still able to follow what was happening, especially since it was all coming to an end anyway. Seeing all the big ideas and plans ultimately meaning nothing really drove home just how impossible the survival of either Earth really was.

Even if the script gets a little verbose and hard to follow, the art is a show-stealer (and stopper!) and makes the story relatively easy to follow. From here on out, it’s all Battleworld all the time. Strap in because it looks like things are going to get even crazier from here.