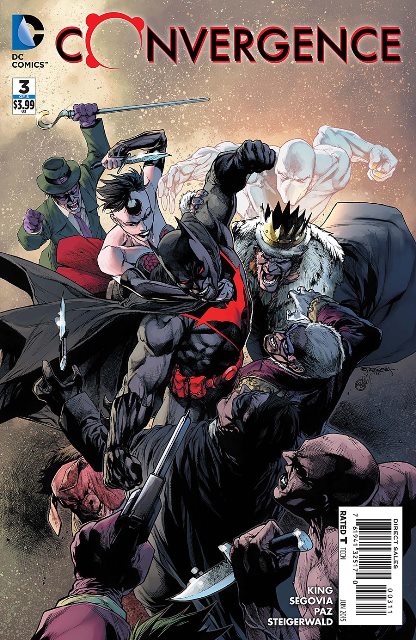 Here we are at week three for Convergence and we open with Green Lantern, The Flash, Superman and Yolanda Montez (formerly the Avatar of The Red) trying to help Deimos from a different Earth. As things progress we see the heroes attacked by Telos’ drones from underground while Telos himself is upset that the Bottle City of Kandor from yet a different universe refuses to fight. As promised, Telos crushes them with little effort.

This is Jeff King’s second issue as a strictly solo writer and, well things aren’t improving all that much. His dialog is largely clunky and often confusing due to some strange word choices and even out-of-character moments for the main roster. Superman (Val Zod) particularly has a strangely toned arrogant moment. His pacifism from Earth 2 seems all but forgotten now. Here he’s written as a “punch first, punch again, punch some more and once everything is beaten maybe ask a question or two” kind of guy.

There is a nice fun moment when Batman (Thomas Wayne) and Dick Grayson ride in like the cavalry with a Batmobile very much like the one used in Grant Morrison’s Batman and Robin run from a few years ago. It doubles as a Batwing and comes equipped with lots of fun weapons. Too bad it gets busted up and is unusable after an initial attack.

Deimos continues harping on about how Telos is a slave to Brainiac and is afraid of something at the center of the prison world. Not much of a description or even much in the way of development there. Though Yolanda is starting to sense something evil in Deimos, they continue to follow his lead, as it were.

Thomas Wayne decides to stay behind as the others move on with the mission, though he doesn’t give them much of a reason. It’s really kind of odd that the others agreed to letting him and Grayson, once again, do their own thing. The only logical explanation for that would be if they all assumed his Miraclo supply was still fine. It isn’t and he reveals to Grayson that he stayed because something or someone followed them from Gotham and he wanted to buy the others some time to get further away.

The others do finally reach Deimos’ home city, which did seem a bit easy to find. Luckily the others remarked on this point. Not that it makes them anymore aware that it’s a trap. In the lower levels of the main castle we see Monarch and Degaton, two characters who have time manipulation abilities and were captured along with many others at various versions of Vanishing Point. They’re both being held prisoner with the others by Shakira (no, not that one) who claims to be working with, not for, Deimos. Clearly, Deimos thinks the Earth 2 heroes have some role to play in their escape. For all you Rip Hunter and Booster Gold fans, might want to pick up his book this week. Turns out he’s likely going to be important to the overall tapestry and might actually be an interesting part to the main story.

But who followed this older Batman and Grayson from the alternate Gotham? A cadre of villains lead by Doctor Hurt from Grant Morrison’s Batman run. This being a different, older and more brutal Batman, when he starts to lose the fight he goes all suicide bomber on them and takes out the lot. Though his bombing skills are something to behold as he takes out a fleeing Man Bat without harming Dick Grayson, who was being carried off. So now Grayson is all alone…but wait, there’s one more.

Out of nowhere, Joker appears and pulls a move he’s famous for…he shoots Grayson in the stomach and seemingly paralyzes him. Not that Joker has much time to make much of a joke out of it, Telos shows up and snaps his neck. So essentially, Joker showed up to shoot Grayson…and then die. A bit of clunky storytelling isn’t beyond this series so far, so no one should feel surprised. And it should be obvious that Telos, despite being connected to the planet, plans to interrogate Grayson about where the rest of the heroes have gone.

It’s not that the ideas here are completely bad, it’s the execution. King is still an inexperienced comics writer and his dialog reflects it. Most characters don’t have individual voices and several story moments feel more like marking time than moving forward. On the upside, Segovia’s art is almost worth the price of admission. His line work gives each character a lot of personality and he knows how to capture the emotion of a moment that could have been even better if some of the dialog and narration boxes weren’t getting in the way.

Things will likely pick up some in the next issue, but it’s hard to say if it’s going to be enough to make this series worth the price. Luckily, the tie-ins are largely winners and hugely entertaining. 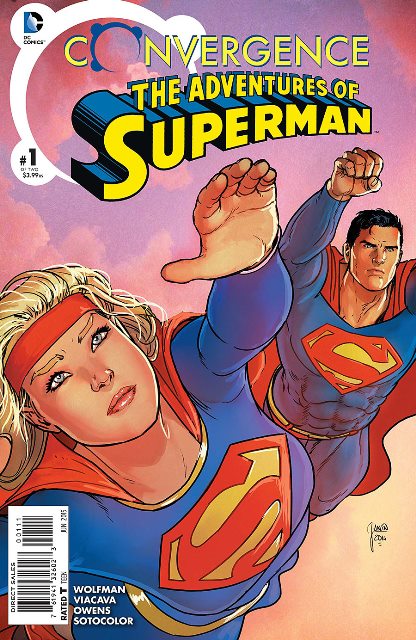 Convergence The Adventures of Superman #1

Marv Wolfman did something incredible with this issue: he managed to make a pre-Crisis Superman and Supergirl feel as modern and fun as they are classic. Superman and Supergirl are trapped in Gotham City and have been trying to find a way out of the dome. With Lucius Fox’s help and a kind-of mind-reading device that delves into Supergirl’s subconscious (something that would only work in the Silver Age and yet it’s brilliant here), they find a way into the Phantom Zone which might get them out of the dome. Oh, but there are still Kryptonian criminals to deal with so it’s not exactly a walk (or flight) in the park.

Supergirl is really the star of the show here and she gets some really great hero moments. But it’s the emotional beats that make it worth reading. Roberto Viacava’s art manages to do visually what Wolfman’s script does with text. Fans who want their Superman with a much sunnier disposition and a quick wit need to pick this up, too. Can’t wait for the next issue!