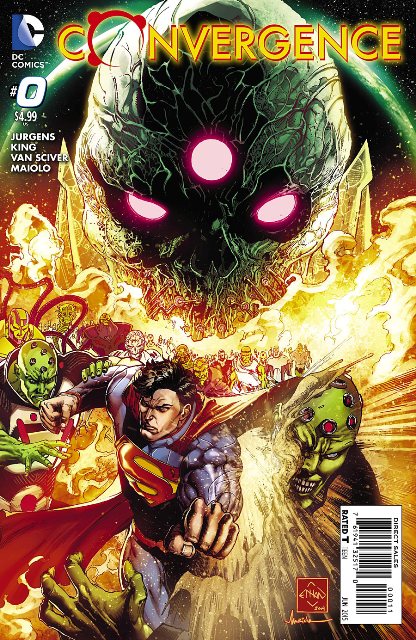 It begins…If you’re unfamiliar with the concept of DC’s multiverse, some events in recent issues of Futures End and/or the Superman: Doomed crossover from last year, you might be in for some confusion. Convergence #0 starts where Superman: Doomed #2 ends as Superman has pulled Brainiac into a supermassive black hole and burned off the Doomsday infection from himself. Superman finds himself in a new dimension where he encounters a “Super Brainiac” who has taken over a world in this plane of existence and is using it to hold bottled cities from various other dimensions and timelines within the DC multiverse.

This new Brainiac explains to Superman that, in all his travels and throughout every timeline, Superman is always an anomaly and at the center of each universe’s survival or destruction. This Superman is one the SB has never seen before, from an unknown-to-him universe. But now he knows where it is and jumps ahead to the time when that version of Earth is about to end so he can collect a city from it (you can see this battle in Futures End). Superman is left in the care of a being who takes on the form of former Brainiacs from throughout DC’s history. He explains that the world and his master provide the bottled cities and its people with everything they need. But this caretaker realizes something is wrong when the SB doesn’t return. (Psst, it’s because he got super-punched so hard in Futures End that every other version of Brainiac in the multiverse felt it)

Fearing this Superman is to blame, he sends him back to his home universe with no memory of what he’s just seen. At this point, this caretaker decides SB’s absence means it’s time to see which universes are meant to live and which are meant to die. He takes on a new form and becomes the new big bad of this series, Telos. Issue #0 ends there.

It was quite a whirlwind of a #0 issue with plenty of exposition (too much, really) and some great art from Ethan Van Sciver. Sciver is really the standout here as he draws a beastly Superman who pulls no punches when it comes to Brainiac. Although, he’s written a bit too brutish in this story, even more so than other writers in the New 52 have made him at times. His confusion was understandable in the situation, but his first response was a bit off-putting. Still, this establishes the base story fairly well, even giving newcomers a quickie recap page at the beginning using mostly images from other New 52 Superman stories to catch them up. While this is labeled a Convergence chapter, it really played out like the epilogue we needed for Superman: Doomed. Not a bad first effort for writer Jeff King (TV’s Heroes), but it’s a good thing he had long-time Superman scribe Dan Jurgens along for the ride.

Now the story actually kicks off…with yet more expositional dialog. This is why you don’t hire Scott Lobdell to script. You know, other than his penchant for being completely out of touch with today’s audience. It’s like the guy just doesn’t pay attention to how people actually speak or he feels comics should be written in this ham-handed manor straight out of 1975. Either way, stop it!

The story itself does continue to be interesting, though. The opening kicks off with what looks like the destruction of the Injustice: Gods Among Us representative city. Paz and Pagulayan have some engaging panel layouts and their aesthetic follows that of Injustice fairly close, so fans of that will recognize it right away. Lobdell’s dialog does bring the scene down a bit, though. And it continues to do that throughout the issue.

If you read issue #0, you don’t learn too much new info here. Lots of exposition explaining the setup and rules again. But we get the surviving heroes of Earth 2 after the end of the World’s End weekly. They give a fairly drawn-out explanation of where they came from while trying to explain each character’s motivations which still won’t alleviate much confusion for those who haven’t read Earth 2 before. Once the action gets going things get a little more fun, though. And once the dialog stops getting in the way of the art, the issue actually becomes quite enjoyable.

The intriguing part comes when Telos can’t figure out how the Earth 2 heroes got to his new planet. They don’t have a city, which makes them anomalies to him and we know from issue #0 how much he hates that.

The domes that held all the cities in their own private spaces begin to fall and the powers and abilities of those super beings trapped inside begin to return. Telos tells all cities they must battle each other for survival and that they have no choice in the matter. Cities will fight to the death or both will be eliminated.

Once things get past the exposition, the issue wasn’t too bad, but the dialog does get really ham-fisted at times. That’s Lobdell’s writing for you. The art on this one isn’t quite as good as the previous issue, either, but it’s hard to match Ethan Van Sciver. Hopefully next issue has something that pushes the story forward in a bigger way. 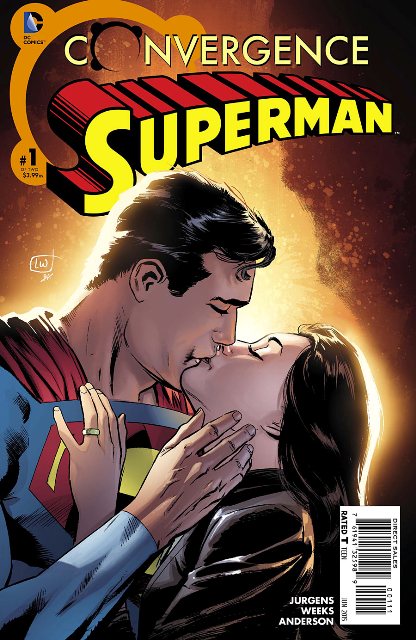 Written by Dan Jurgens
Cover and art by Lee Weeks
$3.99

If you’re a fan of Superman from the late 80’s and throughout the 90’s, this is your book. Superman has been operating in a domed Gotham City for a year without powers. He’s gone all Crime Buster, but without the side of crazy. Essentially, he’s become kind of like Batman, but without the cool gadgets. Adapt and survive is the name of the game. And, without his powers, he and wife Lois are now expecting a baby. But then the dome drops and Superman is back! Although now he’s got a contingent of “heroes” from the Flashpoint universe coming to take him out. Not out of malice, but because they’re afraid of what happens if they don’t. The Flashpoint Superman has an interesting view of things, too and it’s going to lead to some major conflict in the next chapter.

This is the book I enjoyed most from the first week of Convergence. Great art from Weeks and a solid story/script from Jurgens made it seem like something I’d want to see made into a monthly title. It has a few moments where it meanders in the middle, but those don’t last long and we’re back to some exciting stuff. This is an early contender for Best Convergence Title. 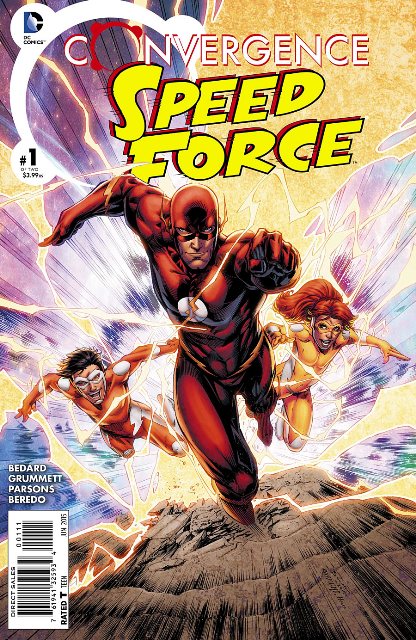 The classic Wally West is back and he brought the kids along for the ride. If you’ve been missing this version of the Scarlet Speedster, you can’t afford to miss out on this title. While Bedard is typically hit-and-miss for me, he handles the story and script here with precision and it’s never dull, even when it gets a little text-heavy. Poor Wally and the kids have been trapped in another version of Gotham City for a year without connection to the Speed Force until the dome drops and Telos explains what’s about to happen. Bedard does a great job of setting up the world the Wests have been trapped in and tapping into Wally’s voice in a way that isn’t far removed from how Mark Waid wrote him way back when.

Tom Grummett’s art stood out beautifully here, too. With great facial expressions and his ability to render so many different types of characters in a single page, he’s clearly not lost a step. There are lots of little call-backs in there too for those long-time readers. Buy this one as soon as you can! 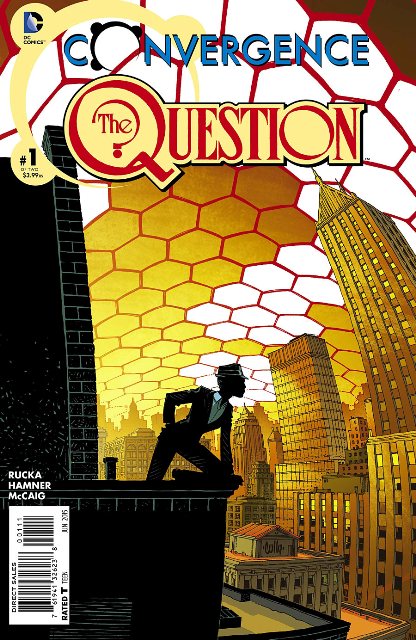 Written by Greg Rucka
Cover and art by Cully Hamner
$3.99

You read that right, Greg Rucka and Cully Hamner are back together and giving us a Renee Montoya Question story! Oh, and it’s pretty much awesome from the opening panel to the last page. If you read their series from a few years back, then you’ll have no trouble jumping back into this. It’s like we never left. There are tons of references to past stories, including several to the incredible Gotham Central. Of all the tie-ins so far, this one feels the most authentic to the era it’s attempting to portray, with the exception of maybe Superman. The story picks up nearly where Rucka left off with Montoya and it hits the ground running. The supporting cast is quite strong, too and that last page is going to have long-time fans ready to stand and cheer.

If you’re not familiar with the characters, this might be a little confusing at first. If you’re a fan of Gotham Central and/or Rucka’s Detective Comics run from 2010, you won’t be disappointed in this. Call this one another can’t-miss issue!

*Secret Wars has not started yet, therefore I don’t have anything for that event. Secret Wars #0 releases on May 2 for Free Comic Book Day.