Welcome to the first edition of this weekly look at upcoming new comic book releases. Every week Russell picks his “most anticipated” books and tells you why spending your hard-earned dollars on them is worth it…well, by his estimation, anyway. 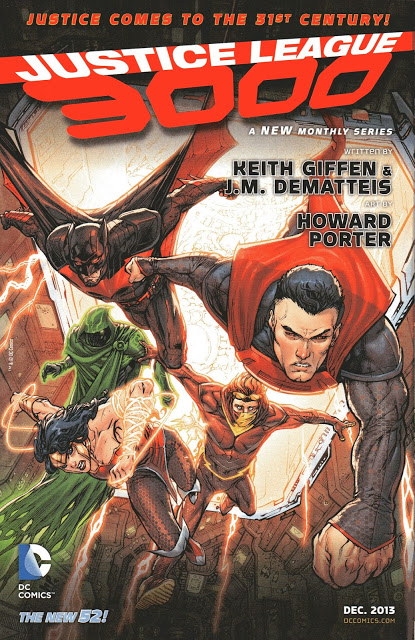 Justice League 3000 #1 – How could this not be on your radar? After all the controversy of changing artists from Kevin Maguire to Howard Porter and the hype around it being the return of Keith Giffen and J.M. DeMatteis to a Justice League title, this has to be the biggest release of the week.

Giffen and DeMatteis had a great run on Justice League International way back when, commonly referred to as the “Bwahahaha” era. While this title is rumored to be a more “gritty” take than the good ole’ JLI version, this team together can’t help but bring the humor along with them. Just check out what they’re doing on Larfleeze (most underrated DC title running today) for an example. Howard Porter and the hype around it being the return of Keith Giffen and J.M. DeMatteis to a Justice League title, this has to be the biggest release of the week.

Add to all of this the return of Howard Porter, who was the artist on Grant Morrison’s legendary Justice League of America relaunch in the 90’s. The action should be fast-paced with some sleek character design, to boot.

Superboy #26 – Marv Wolfman and Frank Hannah take over as series writers and give us the full-length debut of John Lane Kent, the son of Superman and Lois Lane from a different dimension. This version of Superboy was stolen and raised by Harvest, the villain from the first Teen Titans and Superboy stories when the New 52 launched. He used this “evil” version of Superboy/man to clone a new Superboy, which became Kon-El, the character that’s stared in the book over the last two years. Still with me?

Now, John Lane Kent has stepped in to replace the supposedly deceased Kon-El, but nobody knows that just yet. After a tumultuous first couple of years, Superboy is really due for a break. Frank Hannah is relatively new to comics, but Marv Wolfman was responsible for the single best run of Teen Titans ever with his New Teen Titans stories. If anything, this will be a major shakeup of the status quo and could be exactly the direction the book needs to take in order to gain some positive traction. It’ll certainly be an interesting turn, no matter how it shapes up. 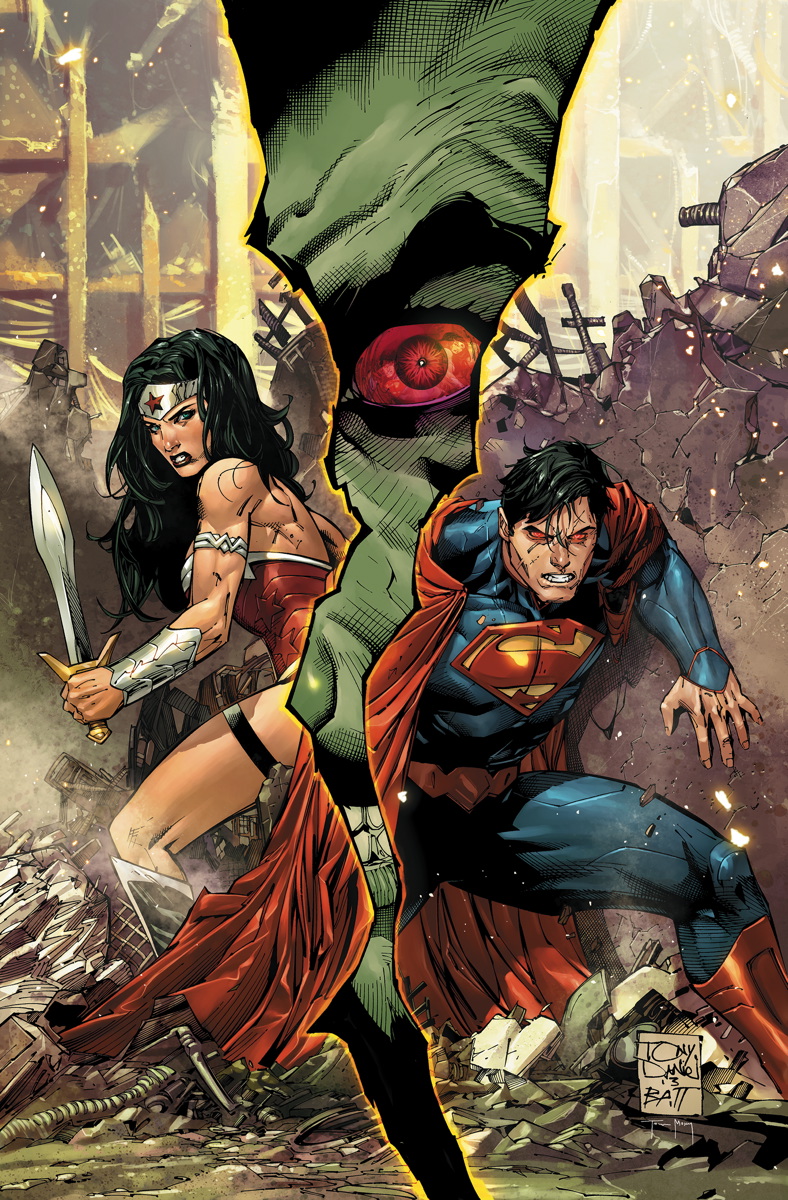 Superman/Wonder Woman #3 – This book has stepped up to the plate and hit a homerun! What could top the return of Doomsday from issue #1 or the Superman/Apollo fight from issue #2? One word: ZOD!

Writer Charles Soule and artist Tony Daniel are a dynamite team. They’ve taken the Clark/Diana relationship to some really interesting places and have shown just why this power couple actually does work pretty well. We all know this relationship won’t last forever, but the idea and development of it here has really worked to our advantage. Seeing these two together as a team, with neither being over the other, shows a great amount of respect for both characters.

It’s also nice to see another Wonder Woman-centric book on the shelves each month. While this is listed as a Superman Family title, it’s really a second Wonder Woman title, too. Even if you’ve been dead-set against Superman and Wonder Woman being a couple, you should be able to enjoy this book. The artwork alone makes it a true standout every month. 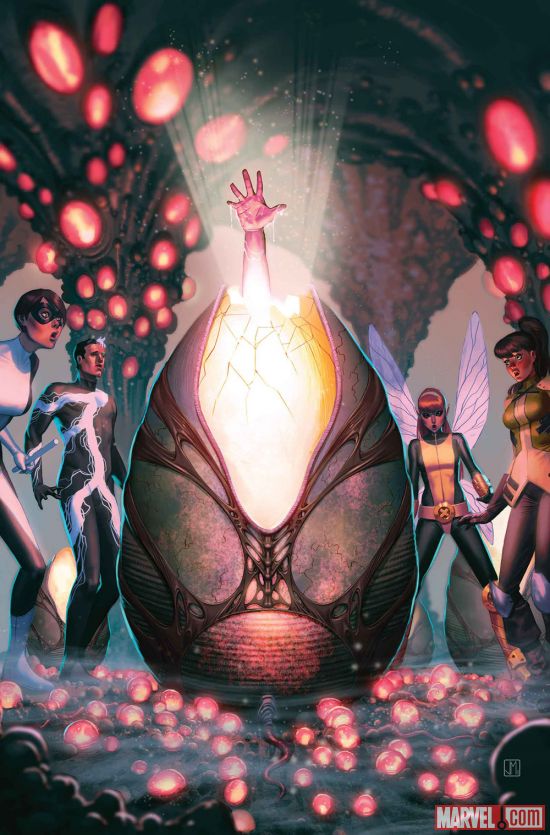 Inhumanity: Awakening #1 – Inhumanity is, of course, the next big Marvel event that is bringing back the Inhumans to mainstream Marvel. This title is going to explore the discovery of a bunch of new Inhumans and how it affects the Jean Grey School and Avengers Academy. So, regardless of if you’re an X-Men fan or an Avengers loyalist, this books should have something for you.

Matt Kindt (Justice League of America, Mind MGMT) is writing this one with art from Paul Davidson (X Factor, X-Men Legacy) so it should be one seriously trippy sci-fi adventure story. And, if history has taught us anything about Marvel crossovers, tie-ins usually hold something important to the overall story. 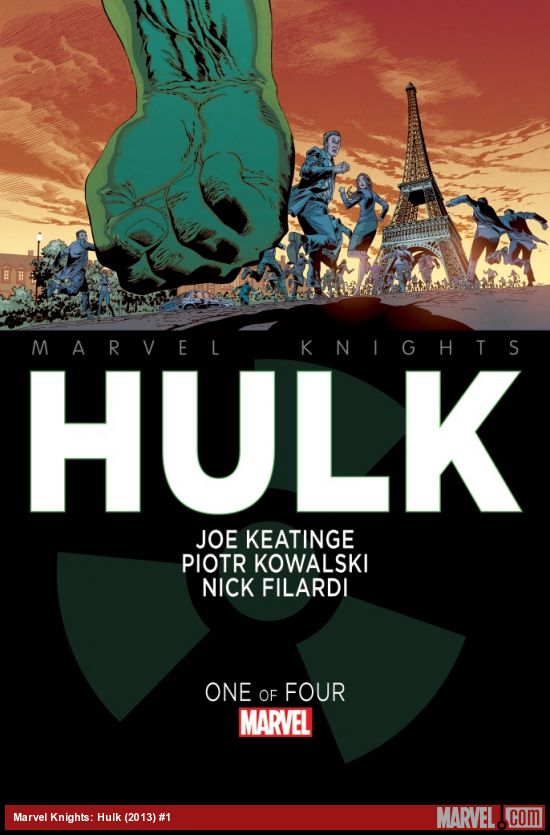 Marvel Knights: Hulk #1 – So far, the relaunched Marvel Knights series has turned out to be a solid reboot of the out-of-continuity superhero story arcs. Both Spider-Man and X-Men have been hugely entertaining and I expect no less from Hulk.

Joe Keatinge (the very underrated and underappreciated Glory) and artist Piotr Kowalski (the somewhat over-the-top Sex) make the leap to mainstream comics and are giving Bruce Banner a seriously crazy story to start things off. Bruce Banner losing his memory is one thing, but winding up in the streets of Paris with other Hulk-like villains chasing him is a recipe for mass destruction (and fun!).

This sounds like one that’s not to be missed! 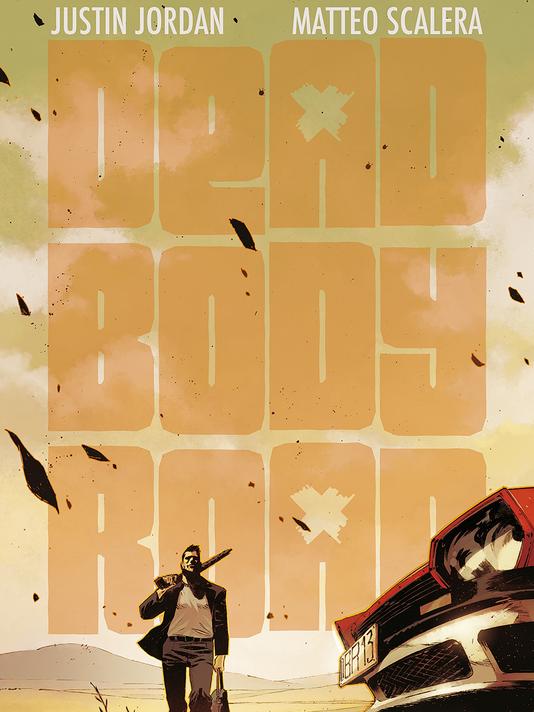 Dead Body Road #1 – Who doesn’t love a good revenge story? And when it’s written by Justin Jordan (Luther Strode, Green Lantern: New Guardians) it’s not going to get much better.

The main character, Gage, lost his family to a brutal murder and he sets off to get the ones responsible. Sounds familiar, but there are way more twists in this story than Frank Castle probably ever dreamed about. This one is more like an even more hyper-violent take on Pulp Fiction with plenty of layers to whet the appetite for more. Plus, we get Matteo Scalera (Indestructible Hulk) on art. He’s got a really gritty style that’s perfect for this kind of story.

And it’s a $2.99 title, which is becoming a lot harder to find/expect in today’s market.

Krampus! #1 – Imagine there’s a Secret Society of Santa Clauses and the source of their power is stolen from them. The only way to get it back is to make a deal with their version of the devil (or Grinch, if you prefer). That’s the premise of this upcoming dark comedy from writer Brian Joines and artist Dean Kotz.

Just in time for Christmas, too! The writer described it as “The Grinch meets Snake Plissken,” so color me curious enough to give it a try. 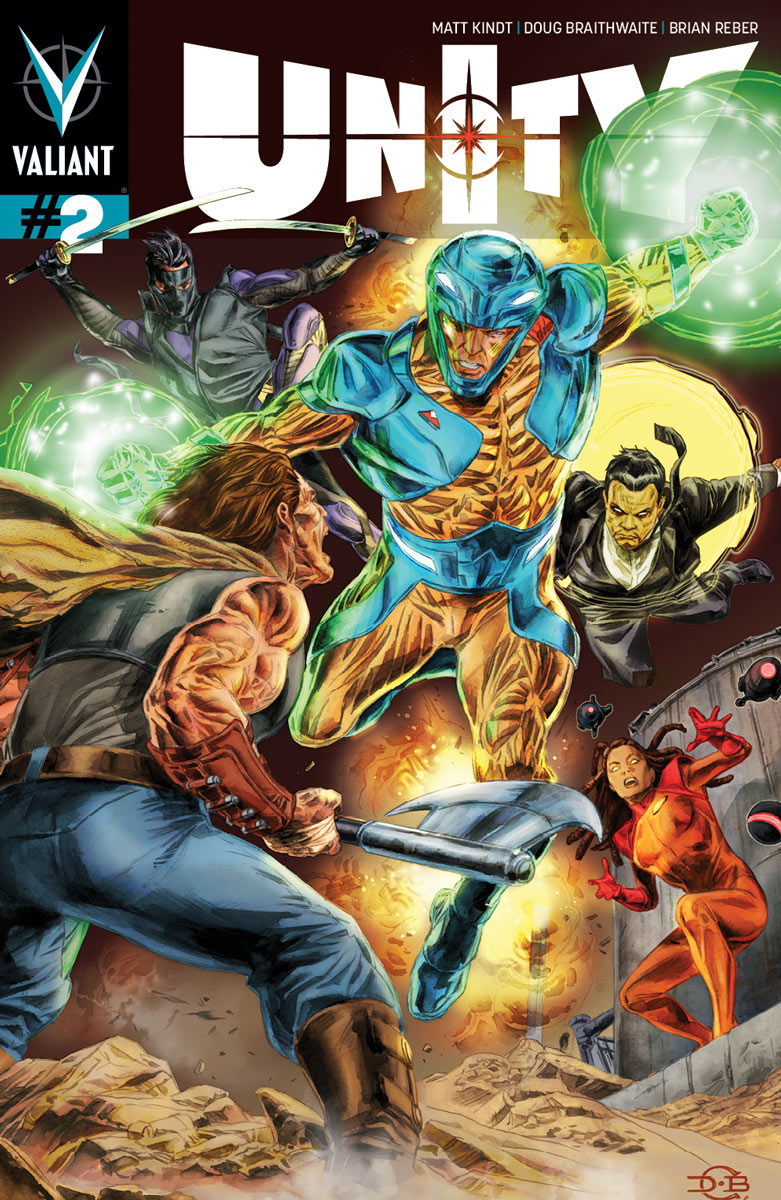 Unity #2 – First, do yourself a favor and go buy all the new XO Manowar and Harbinger trades then pick up Unity #1. Trust me, you’ll burn through them so fast you’ll be reading this issue in no time!

Matt Kindt is a very busy man these days between gigs at DC and Marvel (not to mention his creator-owned work), but he’s able to take it all in stride. And ever since Valiant rebooted almost two years ago, it’s been turning out nothing but quality titles. Unity is the first major crossover event for the Valiant Universe and it landed with a ground-shaking smash with issue #1. I mean, it’s pretty much everybody against XO Manowar, and they really don’t stand a chance!

I hear comic book readers complain all the time about how Marvel and DC are just doing the same old things over and over and how they want something different with their superheroes. Well, here it is! Get on board with Valiant and you’ll never be disappointed. 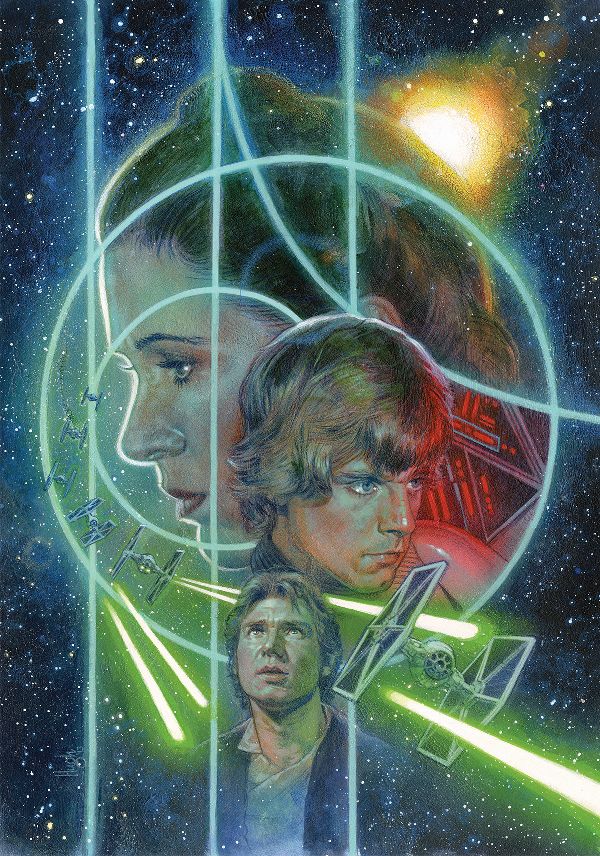 Star Wars #12 – Brian Wood just gets it. This man knows what Star Wars fans want to see and he brings it every single month.

This issue brings the second story arc of the hit series to a conclusion, but directly sets up the next arc, too. I’ve really loved the exploration of what happened between Episodes IV and V and seeing the development of Leia as a real leader and a bit of a badass, too. Luke has a pretty interesting subplot, but it’s Han and Chewie who steal the show for me. And the way artist Carlos D’Anda draws Darth Vader is just sick!

If you’ve missed seeing the old gang from the Star Wars movies in action, there’s no reason you shouldn’t be picking this up. 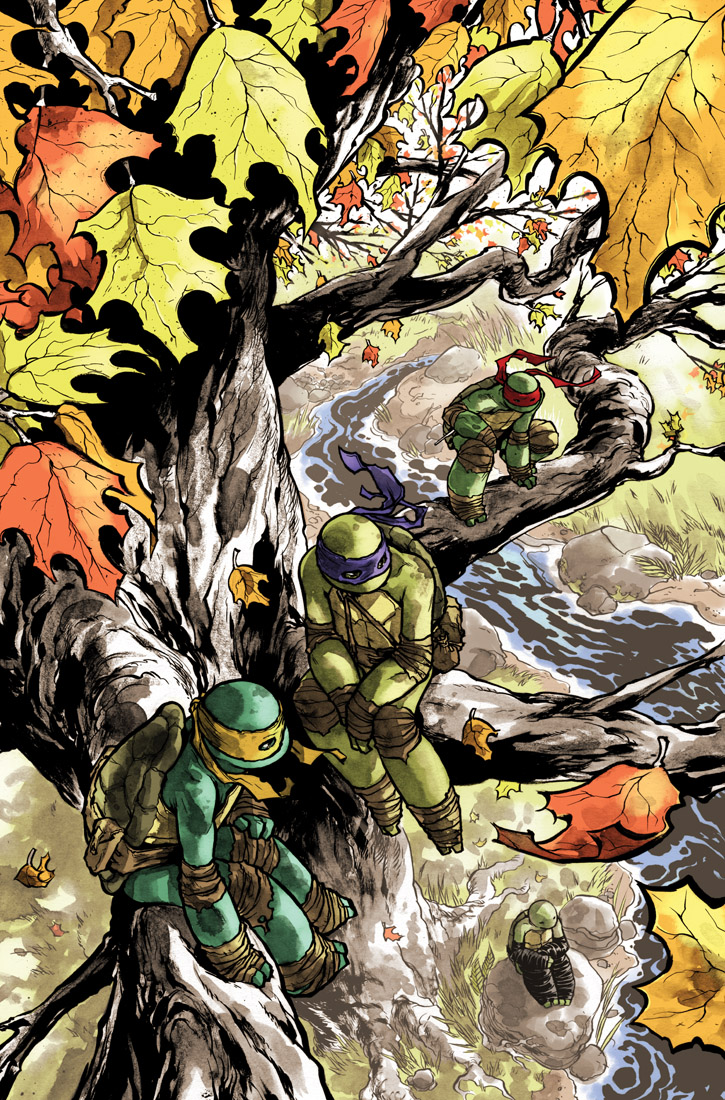 Teenage Mutant Ninja Turtles #29 – City Fall is over and the Turtles are taking some much-needed recovery time. A lot happened in the last story arc and there’s no way it won’t change everyone involved. I’m especially curious to find out how Leonardo’s role is going to change going forward.

This is the beginning of a brand new story arc and could be a good time to try out the book. TMNT fans will definitely want to follow or keep following this as it has only built upon a great mythos from issue #1 to now. And that original TMNT co-creator Kevin Eastman is still on as a co-writer should get any fan’s attention.