The Bulls get a Rose from the grave, the Pacers try to break the glass ceiling, the Cavs bring back an old friend, and the Pistons pay up!

Welcome to the big boy table, Indiana! After slowly getting better the previous two seasons, the Pacers won their division without former All-Star Danny Granger and went seven games with the Heat before getting blown out in the final game. Paul George got the 5-year, max money contract extension before teams like the Lakers tried to take him next summer when his current rookie deal ran out. Hibbert is already signed to max money and played like it in the playoffs. Lance Stephenson showed incredible improvement in year three. West got slightly overpaid for his advanced age, but he is a reliable low-post scorer, so re-signing him was smart. Larry Bird is back in the fold making management decisions after taking a year off, and the offseason goal was to keep the starting lineup intact and improve their awful bench (statistically the worst in the league last year). Hansbrough was a good big man, but not terribly talented, so in are Scola, who can be effective off the bench, and Copeland, who really helps Indiana’s sometimes-abysmal shooting. Watson is an upgrade over Augustin. Green had his moments as a Pacer, but provided nothing in the playoffs. Whatever you get out of Granger, who is coming off of major knee surgery, is a bonus because his contract expires next year anyway.

PREDICTION: Nothing too fancy needs to be done when you are that close to getting to the NBA Finals, so a fine-tuning of the bench was just right for the Pacers. However, the Nets got a lot of star power in the Atlantic, and the Bulls are likely to give the Pacers a lot more trouble in winning the division than they did last year. The Pacers will be back in the hunt, but the degree of difficulty in staying put just went up. (2nd in Central, 3rd in Conference) 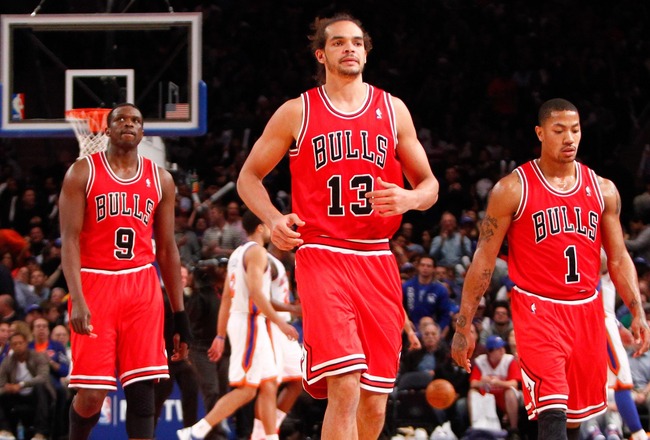 If you look at it honestly, it is the Bulls who got the biggest addition for the 2013-14 season by getting back Derrick Rose, who took last year off to heal from a blown out knee. Many, including myself, were angry that he still sat out while the Bulls made a playoff run, but it is better to be safe than sorry when you have a former MVP in his prime on the mend. In the last two years that Rose played, the Bulls had the best record in the league both times (The only other team with 60-plus wins in 2011 and 50 wins in the lockout-shortened 2012 were the San Antonio Spurs). All the players who departed were on one-year deals, acting as band aids until Rose eventually returned, so as much as fans loved Nate’s amazing playoff performance, he too is replaceable. Dunleavy has never amazed on any team he played for, but he is tall and has range. He will probably replace Belinelli as a spot shooter and extra defender. I was not a fan of Snell at New Mexico, but he played well in summer league with his size at the guard spot, so Tom Thibideau will make use of him, too. It does seem likely, however, that this will be Luol Deng’s final season as a Bull as his contract expires next year.

PREDICTION: Back to regular season greatness after a year of scratching to stay in the playoffs without Rose last season (even beating the almighty Heat once in the second round). 55 to 60 wins with a fresh MVP candidate, and a chance to knock off Miami, is my guess. (1st in Central, 2nd in Conference) 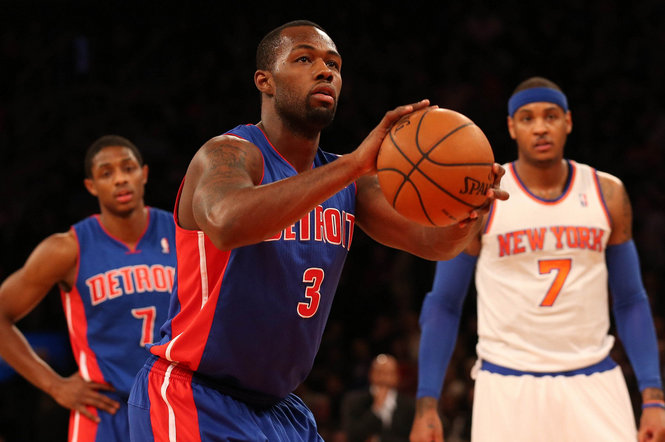 I wavered between Detroit and Cleveland as the next best team in the Central Division because both teams strengthened their rosters. For the Pistons, many would say that what has kept them down for so long was their lack of flavor and refusal to let guys go. This past season was the first step to changing that mindset as they finally let Tayshaun Prince loose in a trade along with the fact that Rodney Stuckey and Charlie Villanueva are in the final years of bloated contracts. But out go those fat deals, and in come some more! The Pistons paid big-time to get former Hawks slasher Smith. He is not always assertive, but his talent is unquestioned and he rarely missed games in Atlanta while being their best defender. He is an instant upgrade over Maxiell, who signed with Orlando. They traded one Brandon for the other as they got Jennings on a light deal in exchange for Knight and two role players. Jennings, however, will miss the start of the season due to dental problems (Yikes!). It is ironic that Prince left Detroit as Billups signs to go back there and Rip Hamilton is still on the open market (Don’t do it, Dumars). The greatest strength for Detroit last year was their bench, and they let some guys go but kept Will Bynum to anchor the subs. Caldwell Pope is the shooting guard of the future once Stuckey is gone and Mitchell reminds a lot of people of Maxiell.

PREDICTION: Cheeks had bad luck in Portland and Philadelphia when he was a head coach in those cities, but did a great job as an assistant to Scotty Brooks by helping mold Russell Westbrook into one of the best guards in the league. I hope he can make Jennings turn the corner as a point guard, as he will get the ball immediately upon his return. With Smith, Jennings, the dependable Greg Monroe, and the rising Andre Drummond, this team will definitely be better, by at least 10 games. Detroit is not back all the way, but they are getting there. (3rd in Central, 6th in Conference) 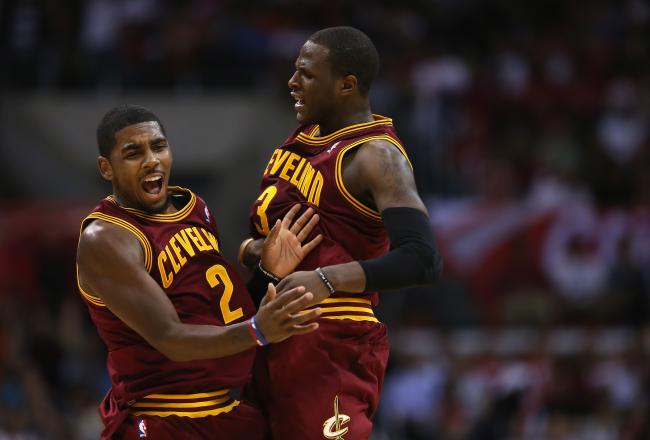 It looks like a reach on paper to predict a team that just lost nearly 60 games and got the #1 pick two out of three years will suddenly make the playoffs, but hidden in the stats is the fact that Cleveland has a bona fide All-Star in Kyrie Irving to lead the way. Irving’s health is always an issue, so maybe the third year will be the charm for him when it comes to staying injury-free. They got Bynum for a lot less than many agents predicted, and it’s a decent risk (The second year is not guaranteed). Bynum at his best is one of the three finest centers in the league. That is an upgrade no matter how you look at it. I was not a fan of overpaying for Jack and Clark, but they both embrace playing reserve roles and Jack is a leader. The Bennett pick still confuses me, but you have to think he will play immediately along with Karasev. Outside of that, Cleveland basically stood pat. Out of Cleveland’s nine leading scorers, only two are gone.

PREDICTION: Dan Gilbert swallowing his pride and bringing back Mike Brown was very smart. There will be small expectations early for Brown, which is where he thrived when he first coached at Cleveland. The defensive rank will definitely improve and Irving and Dion Waiters are future stars. I see them getting into the playoffs. And please stop with the LeBron stuff. That man ain’t comin’ back! (4th in Central, 7th in Conference) 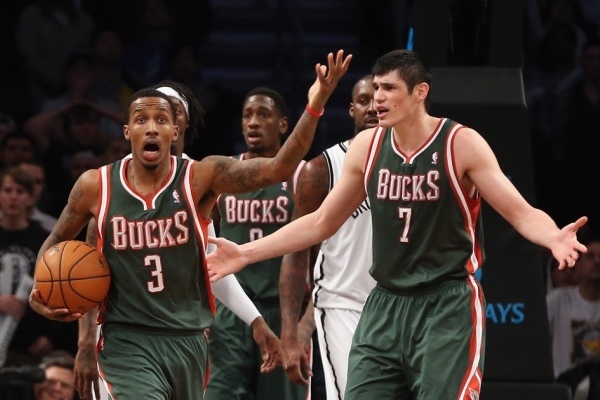 This looks like Reboot #3 so far in the Eastern conference, along with Boston and Philadelphia. It’s not as flat-out abominable as the Sixers’ lineup, but it is a mess nonetheless. Even after making the last playoff spot with a losing record, you knew this Bucks team was going to get overhauled, and they did. The Jennings/Ellis experiment is dead and the Bucks basically became the Milwaukee Hawks. They hired Atlanta’s coach, tried to sign away Jeff Teague to no avail, and then took Pachulia. After that, they brokered a sign-and-trade with Detroit to get rid of Jennings and got Knight, Middleton, and Kravtsov in return. Knight really struggled as a point guard in Detroit, so I hope they try him out as a shooter. Mayo and Neal are good players, but they were in limited roles. Now that they will have to carry the backcourt together, I am more than skeptical. Antetokounmpo is a total mystery (He did not even play in summer league) but he will get into action next season. The one saving grace is a good frontcourt with Pachulia, Larry Sanders (who just got a nice extension), John Henson, the overpaid Ersan Ilyasova, and Ekpe Udoh, who will miss the start of the season with a knee injury. Delfino is also doubtful early on with a foot injury. Butler can certainly help them at the small forward position. I did, however, like the hiring of Jim Cleamons, who was one of Phil Jackson’s longtime aides, as an assistant coach. And giving Drew Gooden the amnesty clause was a match made in GM heaven.

PREDICTION: The last time Ridnour and Delfino played together in Milwaukee, they went seven games with the Hawks in the first round of the playoffs. I… don’t see that this year. Drew did as good a job as he could do in Atlanta, but he is in over his head here. He did, however, find a strong and experienced assistant coach in Cleamons. They won’t be the pits, but I don’t expect more than 30 wins, especially given how much the Central Division has loaded up this summer. (5th in Central, 12th in Conference)