One thing we at Place to Be Nation like to celebrate is the subjectivity inherent in entertainment — be it in wrestling, comics, music, television or, indeed, film. With that in mind, ten members of the PTBN staff will be picking the movies of the PTB generation. In this series, panel members will collect their five favorite films of each year, beginning with the year in which the oldest writer was born — 1976. The only rule given to each contributor was to provide his or her own criteria. Some writers may go with the most artistic films, while others might side with the most iconic blockbusters. We welcome your lists on Facebook and Twitter. Each staff member has submitted a list of five movies from 1997 ranked 1 through 5. A first-place vote is worth five points, a second-place vote worth four points, and so on. Using that point system, we have identified the top 5 movies of 1997.

1997 saw a close race at the top between Mark Wahlberg in his, ahem, biggest role to date and a Mike Myers comedy classic. But before we reveal the top 5, let’s see the movies that received votes, but fell short of making our final list. 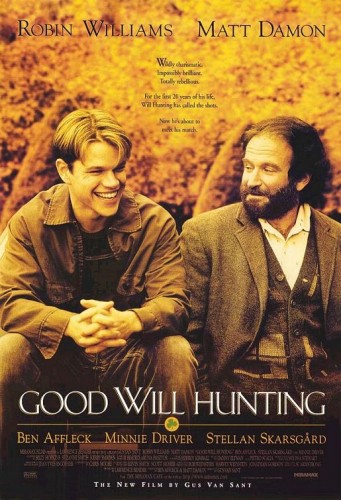 10 points, ranked by 3 of 10 voters, highest ranked by Andrew Riche and Steve Wille at No. 2

Anthony Estrada: I write this having just learned of the passing of Robin Williams.  Williams’ performance in this film earned him an Academy Award and I’ll use this space to focus on that performance.

Will Hunting is a brilliant and angry young man. He has been abused and neglected and, as a result, shies from interactions which might take him out of his comfort zone. He doesn’t challenge himself, whether in work, love or friendship. One day an MIT professor, Gerald, discovers Will’s absurd mathematical prowess and takes an interest in him. When Will gets in trouble with the law, Gerald keeps him out of jail by agreeing to supervise him and force him to see a psychologist. Will meets with several psychologists and alienates himself from each with his rude and aggressive behavior. Then he meets with Sean.

Sean, played by Robin Williams, is a Boston guy, just like Will.  He’s intelligent but taciturn.  You get the impression he could be more successful than his modest office suggests. Sean lost his wife to cancer and her absence clearly weighs heavily upon him. Will senses this in their first session, and pokes the bear by analyzing Sean’s feelings about her death. Sean’s reaction is swift.  He puts his hand on Will’s throat and backs him into a wall. There’s no posturing or machismo in the gesture.  It’s a flash of heartache and rage.  And then it’s gone, and Sean is once more his gentle and patient self.  Despite their rough start, Sean agrees to keep meeting with Will. He sees himself in the young man, and is determined to help him.

Will continues to meet with Sean and the two discuss life, love, trust and pain.  Their conversations never feel trite or forced. The relationship they form feels as genuine as most anything I’ve seen in a movie.

Williams’ performance is spot on. I don’t believe that someone can “fake” that degree of compassion or empathy.  Mr. Williams understood something about the human condition that he was able to share with the world.  I am grateful that he shared it with me. 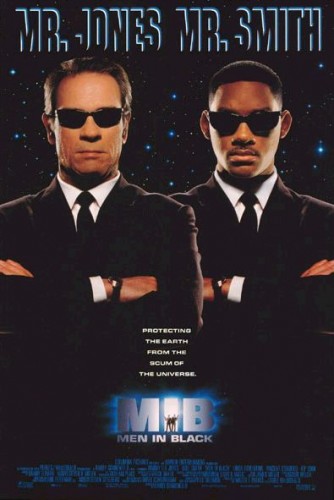 Kati Price: Men in Black is about a secret group  that protects the universe from aliens. It is the first of, currently, three films of the series, although a fourth is in development. The series follows agents Kay and Jay, portrayed by Tommy Lee Jones and Will Smith respectively. This duo is dynamic. The movie has just enough comedy and just enough drama. It can be a bit cheesy at times but it is done really well. Men in Black is one of those really fun films that just makes you happy to watch. The film also features Tony Shalhoub and Rip Torn. The acting was great and the action was just right. The film definitely made me want to see the others in the series. Men in Black is definitely worth the watch and deserves its place on out list. 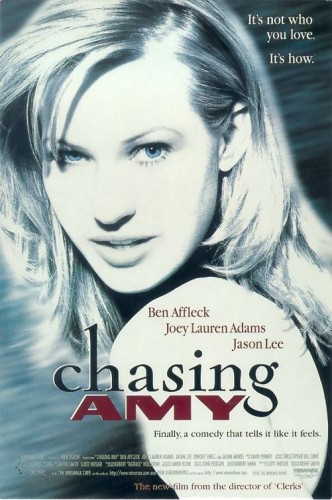 13 points, ranked by 3 of 10 voters, highest ranked by Nick Duke and Russell Sellers at No. 1

Russell Sellers: Kevin Smith’s penchant for the more vulgar side of comedic dialog notwithstanding, this might be the most genuine and heart-felt movie he’s ever made.

Relationships are complicated and when indie comic writer/artist Holden McNeil (Ben Affleck) falls for fellow writer/artist and outspoken lesbian Alyssa Jones (Joey Lauren Adams) it’s doubled. The two do eventually become lovers after Holden breaks down on Alyssa one night and confesses his feelings; which leads to him suddenly being giddy and her being alienated by her supposed friends. But things go from complicated to horribly wrong when Holden’s homophobic (possibly closeted homosexual) friend/partner/roommate Banky (Jason Lee) outs Alyssa’s past as a sexually promiscuous harlot sending Holden down a terrible path of slut-shaming and self-righteousness that destroys everything good he had in his life. But he does learn a valuable lesson in the end, as we all should.

Romantic comedies follow a well-worn formula of boy-meets-girl, boy gets girl, boy loses girl, boy gets girl back. And just when this one seems to be headed that route, Smith throws it for a loop. And, like all his other movies, it comes loaded with some of the most quotable lines of any movie released that year. But any movie like this needs strong, believable performances to make it truly work. That’s where Ben Affleck and Joey Lauren Adams truly standout, but it’s Jason Lee and Dwight Ewell’s Hooper X (a closeted gay indie comic book writer/artist posing as a pseudo-Black Panther member to sell his comic books) that steal every scene in which they appear. Hooper’s insights into Banky’s sexuality come at a pivotal time in the film and adds some perspective to the whole show. But leave it to the one-and-only appearance of Jay and Silent Bob (Jason Mewes and Kevin Smith, respectively) to sum up the movie as Bob gives the true-life story of Kevin Smith’s own failings in love.

Chasing Amy is a modern cinema classic and will have you laughing, filled with a burning rage and crying all within the span of 113 minutes.

Greg Phillips: Yeah, baby! Mike Myers shook up the comedic world (and my generation) when he dropped this masterpiece spy spoof on us in 1997. This movie and its sequel are my two favorite comedies of all time. The way some can quote Kevin Smith movies line for line, or others can recite the classic works of Woody Allen, I can practically act out the entirety of the Austin Powers series.

But enough about the series, let’s talk about this movie. In terms of a pure spy movie/James Bond parody, this might be the best there’s ever been. Every joke hits. I mean that literally. Comedy is subjective, of course, but I laugh every time I’m supposed to and sometimes when I’m probably not. Myers is flawless as the hopelessly unaware Powers and the haplessly malevolent Dr. Evil. Liz Hurley burns up the screen as Vanessa, one of the hottest sexpots in any comedy. Seth Green, Will Ferrell and Robert Wagner are terrific in their roles, but my favorite side characters are Tom Arnold’s crazed Vegas cowboy and Michael York as the aptly named Basil Exposition. There are too many classic scenes to choose from when picking out highlights, so I’ll direct you to what may be my favorite — the blackjack scene in which Austin opts to stay at 5 rather than take anymore cards. “Very well. His 20 beats your 5.”

This sort of movie is my bag, baby. 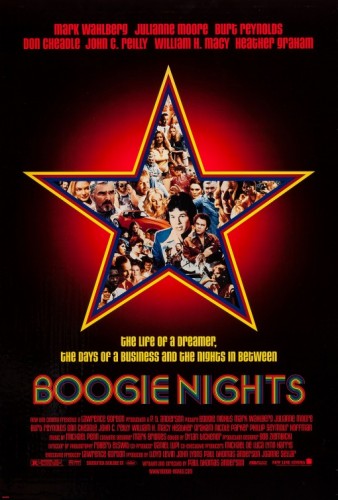 19 points, ranked by 6 of 10 voters, highest ranked by Anthony Estrada, Andrew Riche and Steve Wille at No. 1

Steve Wille: It’s sad that one of the greatest movies of the 1990s is most remembered in the pop culture world by a scene with a giant prosthetic penis. Boogie Nights was writer/producer/director Paul Thomas Anderson’s coming-out party, a film that, though primarily a drama, defied the boundaries of traditional genre. At times an action film, at others a dark satire, and when you least expect it, a moving, almost romantic look into the lives of the 1970s and early 1980s pornography scene in Southern California. Mark Wahlberg leads the ensemble cast as “Dirk Diggler,” a shy teenager who enters the world of porn, finding confidence, ego, fame and family stand-ins. A sleazy, yet lovable Burt Reynolds received an Academy Award nomination for his portrayal of director Jack Horner, as did Julianne Moore for her surprisingly sweet role as the matriarch of the eccentric acting troupe.

Looking back at the movie, it’s impressive to see the sheer star power spread throughout the cast. William H. Macy, Don Cheadle, the late Phillip Seymour Hoffman, and Heather Graham all make appearances. Many of these actors, especially Hoffman, worked again with Anderson in later masterpiece productions, such as Magnolia, Punch-Drunk Love, There Will Be Blood and The Master. But it was Boogie Nights that launched Anderson to stardom, demonstrating his unique ability to both write period pieces and utilize technology to capture the distinct look of the times.