One thing we at Place to Be Nation like to celebrate is the subjectivity inherent in entertainment — be it in wrestling, comics, music, television or, indeed, film. With that in mind, ten members of the PTBN staff will be picking the movies of the PTB generation.  In this series, panel members will collect their five favorite films of each year, beginning with the year in which the oldest writer was born — 1976. The only rule given to each contributor was to provide his or her own criteria. Some writers may go with the most artistic films, while others might side with the most iconic blockbusters. We welcome your lists on Facebook and Twitter. Each staff member has submitted a list of five movies from 1983 ranked 1 through 5. A first-place vote is worth five points, a second-place vote worth four points, and so on. Using that point system, we have identified the top 5 movies of 1983.

George Lucas returns to the top of our year-end list with another bout of Star Wars dominance. However, there were several other contenders to round out the top 5. But before we reveal the top 5, let’s see the movies that received votes, but fell short of making our final list.

Eddie and the Cruisers — 1 point 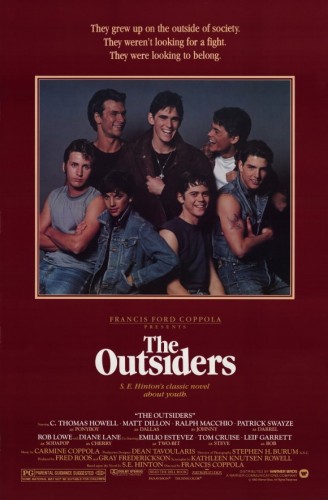 9 points, ranked by 3 of 10 voters, highest ranked by Kati Price and Andrew Woltman at No. 2

Andrew Woltman: Francis Ford Coppola isn’t the first person that comes to mind when you think of 50’s and 60’s nostalgia. I immediately picture Henry Winkler using his fist to power a jukebox. Yet the man who is best known for being Nicolas Cage’s uncle crafted one of the more popular coming of age throwback films of all time. I remember watching in Mr. Manley’s class in 7th Grade English as I saw these young men whom at the time of its release were primarily no one, but to me were some of the biggest stars in the world.

It’s an amazing cast which showcased the talents of people like Tom Cruise, Rob Lowe, Matt Dillion, Ralph Macchio, Patrick Swayze, Emilio Estevez for what was pretty much the first time. The acting works because there was nothing to really judge these actors on previously. I’ve read Rob Lowe’s memoirs, and he talks about the experiences he and the rest of the cast went through, and the growing that they all did during production. Not only did the film show boys becoming men, it showed us inexperienced actors becoming superstars.

Unlike Grease or Happy Days, this wasn’t a cheerful look back into the past, this was gritty and real and thus it felt more human. These weren’t the young men who come home to Mom’s meatloaf, these are the Greasers who fight to survive, get profiled by the police, and take no guff. Thus, this is one of the more truthful looks at the past we will get.

13 points, ranked by 4 of 10 voters, highest ranked by Nick Duke and Anthony Estrada at No. 2

Nick Duke: When I was a young child, there were two completely age-inappropriate movies that I watched entirely too often. One of those was Scarface. Since I can remember, I’ve been a big fan of Tony Montana and his rise and fall in the 1980s Miami drug trade.

Scarface features Al Pacino in perhaps his most iconic role, albeit without some of the range he’s shown in other performances. The story is fairly simple – a Cuban criminal arrives in America and works his way up the ranks of the cartel, becoming increasingly greedy and self-assured as he amasses great wealth and power. In the end, it’s his own hubris that proves to be his bloody undoing.

And while it’s Pacino’s litany of quotable lines that the movie is best remembered for, it also has a pitch perfect score and numerous outstanding supporting performances. And if we’re talking unforgettable scenes, that chainsaw scene and the finale still live in cinema history.

From the director’s chair, Brian De Palma certainly lends the movie a distinctive, moody feel that serves to perfectly capture the vibe and look of the 1980s, especially in a town known for its neon-laced nightlife.

But even more notable than the movie itself is the place its taken in pop culture, specifically hip-hop culture. Many rappers and famous athletes have cited the movie as a major influence, even if they do seem to have missed the fact that the movie is meant to serve as a cautionary tale. Whatever the interpretation some have gotten out of Scarface, it has earned its place in film history. 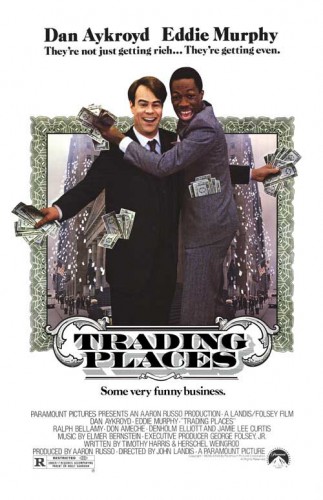 Anthony Estrada: What determines success? Is it effort? Talent? Or does it depend on what we carry into this world from birth? Louis Winthorpe (Dan Aykroyd) is a young man with a lot going for him – career on the rise, attractive fiancée, hilariously droll butler. Bill Ray Valentine (Eddie Murphy), on the other hand, isn’t doing so well. He’s a homeless conman on the road to a bad end. Trading Places chronicles what happens when, on a whim, Louis’s tycoon employers change the lives of both men for the purposes of a social experiment.

Louis works for Randolph and Mortimer Duke, hyper-successful brothers whose extreme co-dependence is unsettling and hilarious. They’re the living embodiment of these guys. They consider Louis, in his WASP-y perfection, and debate whether they could achieve the same results with a career criminal from a poor background. Enter Mr. Valentine, fresh out the slammer after a legal mix-up resulting from casual racism and misunderstanding. The Dukes bail him out and hook him up with a job, mansion and butler – Louis’s job, mansion and butler (they stop short of giving him Louis’s white fiancée. The Dukes weren’t that progressive).

The Dukes frame Louis for dealing drugs, take away the aforementioned goodies and introduce him to Ophelia, a young prostitute played by a prime Jamie Lee Curtis (Can’t fault them for taste). Billy Ray thrives and Louis struggles. The two cross paths, discover they’ve been manipulated, and plot their revenge on the Dukes. What results is a convoluted scheme that’s one part clever and two parts ridiculous fun. The performances are across-the-board excellent, and the movie serves as an unpretentious parable on the important role expectations and opportunities play in shaping us as individuals. 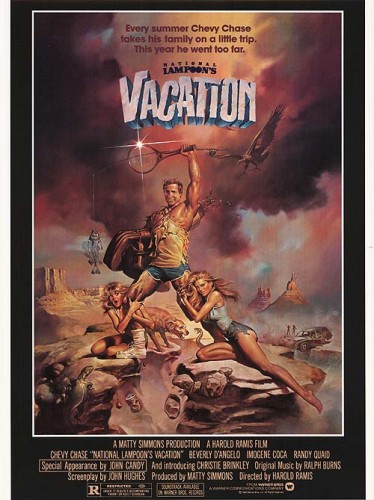 20 points, ranked by 7 of 10 voters, highest ranked by Aaron George, Greg Phillips and Russell Sellers at No. 2

Greg Phillips: OK, so “Holiday Road” quickly became a pretty annoying song. OK, so the sequels never quite matched the brilliance of the original (outside, perhaps, Christmas Vacation). OK, so Chevy Chase lost his relevance sometime in the late ’80s or early ’90s.

None of those facts take away from just how laugh-out-loud funny National Lampoon’s Vacation is. In fact, it remains my favorite of the National Lampoon movies (yes, it’s funnier than Animal House, in my view). Chevy Chase is brilliant, and he was at the height of his powers here, whether it be his dry delivery of some hysterical one-liners or the best physical comedy of the ’80s. Seriously, just watch the scene where Clark Griswold and his son, Rusty, share a beer without laughing out loud as Clark’s glasses seemingly disintegrate during the midst of a typically earnest father-to-son monologue.

It’s Chase’s comic chops that carry the film, but the rest of the cast more than carries its end, from Anthony Michael Hall’s Rusty to the lovely Beverly D’Angelo’s Ellen. John Candy nearly steals the movie in a terrific cameo appearance near the end.

But if anyone threatens to steal Chevy’s thunder, it’s Randy Quaid, who created something of a cultural icon with the character of Cousin Eddie, a great caricature of every family’s resident moocher. The scenes between Clark and Eddie are riotously funny, and yet they lend a strong sense of humanity to Clark. In the end, the movie works because it is filled with heart to back up the laughs, something modern comedies would do well to remember.

Kati Price: I can’t think of a point in my life when I didn’t know what Star Wars was. I used to curl up in my dad’s lap and watch one of them every Friday and Saturday night when I was 3 to about 8. When Episodes 1 and 2 came to theaters, we saw them together on our daddy-daughter dates. My mom never shared our enthusiasm. I saw the midnight premier of episode 3 my junior year in high school. We stood outside all day just to get tickets. I am a huge fan and am honored to be able to review this one on our list.

Recently, I rewatched Return of the Jedi for the first time in years. I had forgotten how much I love this movie. We can argue all day about which movie is the best in the trilogy, but the fact is, they are all amazing. When I rewatched Return of the Jedi, I found a few things that bothered me, but they were nit-picky and so I will only mention the one that has always bothered me. Princes Leia was separated from her mother at birth who died shortly thereafter. Yet when she and Luke are talking she says she remembers her mom. I just had to get that out there. But perhaps one of my favorite scenes also involves Leia. I have always loved the scene in which an unknown bounty hunter brings in Chewbacca and then the reveal when it is shown to be Leia. There are so many scenes to be discussed and simply not enough time. The movies are fantastic. If by some strange happening, you have not seen the movies, you have to. They are great and you will not regret it.

I feel so much when watching and talking about the Star Wars trilogy, so I have tried to keep that in check. I encourage you to watch or re-watch this movie. It is most definitely not a trap!