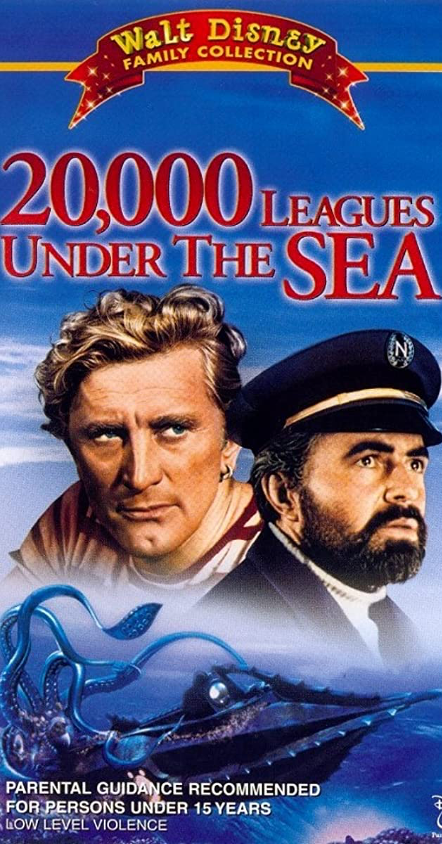 Plot: In 1868, rumors start to appear of a deadly sea monster that is sinking ships in the Pacific Ocean.  Trying to verify if the rumors are indeed true a Professor, his assistant, & a harpooner set sail to find the elusive creature.  What they find after the “sea monster” had disabled their ship was that it was not a sea monster after all.  It was a submarine that was captained by a man who feels that the human race is lost.  Captain Nemo and his crew of his ship the Nautilus take these men aboard and try to show them that life under the sea is better than anything that goes on land.  Though intrigued by all that surrounds them the 3 men try to plan their escape.

Final Thoughts:  Now this is the first true Disney film that I have seen previous to this trek that that I have started on.  Though it has been several years since I last saw it in its entirety the movie holds up big time.  This is also the first Disney movie to be released by Walt Disney’s new distribution company, Buena Vista.  It was also the first Disney movie to be shot in Cinemascope which was something very rare for the time.  It needed a special lens to shoot the movie in this way, and the only other company to use this sort of lens at the time was 20th Century Fox.  Which Disney had to lease the lens from in the first place.  Though this is my opinion only, and being a Disney fan I am glad they did it, but to be perfectly honest this screwed over 20th Century Fox because they only had the one lens.  By leasing it out they couldn’t film anything in Cinemascope, until it was returned to them.  But, Disney took a long time to shoot this movie, more than they had in the past in order to make sure that their movie was the only one that came out in Cinemascope.

One of the things I was most shocked at, because I didn’t remember that he was in it was Peter Lorre. I believe that this is the first time that I have ever seen him in color and it was really weird for me.  If you don’t know who Peter Lorre is, then you are missing out on of the best creepy actors of all time.  He originated the role of Igor in the Frankenstein movies.  It was a character that truly was made for him, because in all honesty he probably didn’t need a lot of make up to pull off the role.  He would later go on to be in Casablanca and M.  M is a notable movie because it’s the first film in history to be about a serial killer.  Lorre like in the majority of his movies plays the conniving sidekick to a T.  He is great with this role and works well with the ladies man Kirk Douglas character.  A funny thing about Lorre and this movie is that he believed that the Giant Squid got the role that was usually reserved for him.  Which if you have seen his previous roles you could actually see him being that.

This movie had everything that Walt Disney loved in a movie, it was a classic tale written by a great author (Jules Verne) that involved the sea and the adventures that go along with it.  To prove how much he loved this story and movie, he created a ride for it, that would be in both Disneyland (now known as Finding Nemo’s Submarine Voyage) and at the Magic Kingsdom at Walt Disney World.  Though both are no longer at the parks in their original forms, there is an Easter egg at the parks to remind you of the story of Captain Nemo.  In Nemo’s quarters on the Nautilus, you will see an organ which he plays in several scenes in the movie.  The actual organ can now be found at Disneyland in the Haunted Mansion ride (In the ballroom).  Replicas of this exact organ can be found in the Haunted Mansion at both Walt Disney World & Tokyo Disney.  I am a Walt Disney World freak, so you may get quite a few of these type of things in these reviews.

Getting an actor like Kirk Douglas to be in this movie was a big coup for Walt Disney.  This was the first time an actor of his caliber had ever starred in a Walt Disney Production.  For the time he was also the highest paid actor Disney had ever used.  It was well deserved to, because he was excellent in the role of Ned Land.  A Harpooner who is both a ladies man and a “macho” man.  Douglas saw himself as that type of actor, in fact in the very first scene you see him in, he purposely had them put 2 women on his arms and for him to start a fight.  To show both sides of what he thought he was.  This is also the only movie to my knowledge or that I have seen him in where he sings and plays a guitar.  He made it look natural even though he only learned how to play the guitar when he started filming this movie.

I would be mistaken if I left out the terrific acting job of James Mason.  A role he was absolutely perfect for.  He made you hate and envy him at the same time.  He held people prisoner, but at the same time who wouldn’t want to be at the reigns of a submarine.

This movie is a great movie for the family, and truly is worthy of being a Disney Classic.  I would highly recommend watching it when you have a chance.

Next Review: Davy Crockett, King of the Wild Frontier (1955)