QUICK NOTE: In case you missed last week’s recap, I had tickets for this show. Since I don’t recap WWE Main Event, I must say that it was actually a FUN program. Way more fun than I ever expected it to be. I was even digging Alicia Fox, which is sometimes hard to do even though she’s easy on the eyes. During her tantrum, she generated a good amount of heel heat for someone that I didn’t really think people gave a crap about much. I don’t want to give too much away so that you’ll be looking for Ryan Everett’s Main Event Recap, but it was a fun hour of wrestling, I admit.

Here comes John Cena to the ring. He wishes Daniel Bryan a quick and healthy recovery. Now as for the Wyatt family, Cena answers the ‘last man standing’ challenge made by Bray this past week on Raw by going to his defense mechanism = YUKKING IT UP with his corny jokes by saying that Bray Wyatt has no balls. I guess “testicular fortitude” is too smart for this audience. With that said, Cena accepts Bray’s challenge, and then makes a challenge to any member of the Wyatt family. He will even let them choose who faces him and bets Bray Wyatt won’t choose himself. Well, Bray Wyatt interrupts with his own crazy thoughts. “Make your little jokes, funny man”. He’s got the whole world in his hands…

Cole mentions how proud Cody was to have won a match over Damien Sandow last week on Raw. Is that REALLY such an achievement for anyone anymore? Goldust and Jey Uso start the match. They get into an exchange of armdrags. Blind tag to Cody, he flies in with a springboard dropkick. Jey backs Cody into his corner for a tag to Jimmy. The Usos work over Rhodes, but Cody fights back with a few quick nearfalls. Tag to Goldust, Cody pays for a cheap shot on Jimmy, but Goldust pops him with an uppercut. Commercials! When we come back, Jimmy is still in trouble. As that continues on, Goldust prevents a tag, but then misses a charge and flies over the top rope to the floor. Cody helps his brother back inside, but Jey gets the tag anyways. Samoan Drop and Buttalanche gets two. Corkscrew Moonsault scores a nearfall, but now the match breaks down. Goldust cleans house, but takes a superkick off the apron. Meanwhile, Cody nails Jimmy with the Disaster Kick for 1-2-NO! Jey makes the save. Cody stands up into a superkick and Jimmy delivers the Samoan Splash for the win. (9:20 shown) Typical Smackdown tag match. Cody and Goldust look disappointed afterwards. **¼

Video package airs highlighting Daniel Bryan’s announcement that he will be taking a leave of absense from WWE to have neck surgery and all the subsequent drama surrounding Brie Bella, Stephanie McMahon-Helmsley, and Kane. We’ll get an update on Bryan’s surgery TONIGHT.

This was uhh… the bathroom break match for me. Last week on Smackdown, Slater was pinned by El Torito. They play around with a red cape. Hornswoggle gets in the ring, but his interference backfires. Torito shoves him out of the ring and hits Slater with another 1-2-3 Kid Moonsault Press for another 1-2-3. (2:30) Seriously, this has got to stop. ¼*

Video package airs of the Shield getting the better of Evolution and all their thugs from this past week on Raw.

Looks like some drama from “Total Divas” that made this necessary. Eva Marie really doesn’t do anything a normal ref wouldn’t do, which you would think would be the reason she’s in this match. Anyways, Nikki slips out of a surfboard and pins Natalya in what anybody with a brain would call an upset. (2:30) Natalya gives Eva Marie some angry looks, but not much else. ½*

In the back with Renee Young, we find that Dolph Ziggler put out a tweet cheering on the Shield giving Evolution what he felt they had coming. Dolph Ziggler explains how he feels Batista is the “weak link” in Evolution and how he never really “evolved”.

Ziggler wants to stick and move to start. It winds up being a big mistake as Bats works him over on the floor. Inside the ring, Batista continues to beat on Ziggler’s back with power moves. He fights out of a chinlock though and tries the jumping DDT, but Bats counters with a Spinebuster. Demon Bomb looks imminent, but Ziggler escapes and hits the Jumping DDT after all. Bats misses a corner charge and here comes Dolph with the ten-count corner punch, but Batista low blows him away to give Ziggler the match via DQ. (4:30) Afterwards, Bats dishes out a Demon Bomb and then gives Dolph a powerbomb onto the barricade! That’ll teach him to run his mouth via tweets! *½

O’Neil comes out saying that Sheamus shouldn’t be the US champ because he’s not from America and immediately pays for it by eating a Brogue Kick. Yeah, 1-2-3.

Byron Saxton talks with Adam Rose by his party bus and his other ridiculous party friends. Does Adam Rose have a problem with Jack Swagger and Zeb Colter? Rose just feels they need to stop being such lemons and be rosebuds instead. Some guy puts a clown wig on Saxton as he heads into the party bus.

Typical match for Sandow. He looks strong and aggressive to start, but quickly screws up. Cobra puts Sandow away in :40. Afterwards, Damien Sandow complains about being a loser until somebody cuts his mic. He’s being silenced! The previous FIVE matches? Combined, they lasted a little over ten minutes.

Heyman speaks the *truth* about his clients Cesaro and Brock Lesnar. I don’t need to explain what those truths are. I strongly dislike Cesaro’s new music though, and that’s my *truth*. Speaking of Truth, he hits a few of his signature moves, but misses with the Axe Kick and receives the Very European Uppercut to set up the Neutralizer for the win. (1:15) This wasn’t any more satisfying than the last five matches. Smackdown needs to stick with the six-match formula. 3/4*

We get a surgery update on Daniel Bryan. I think this shot tells the whole story. 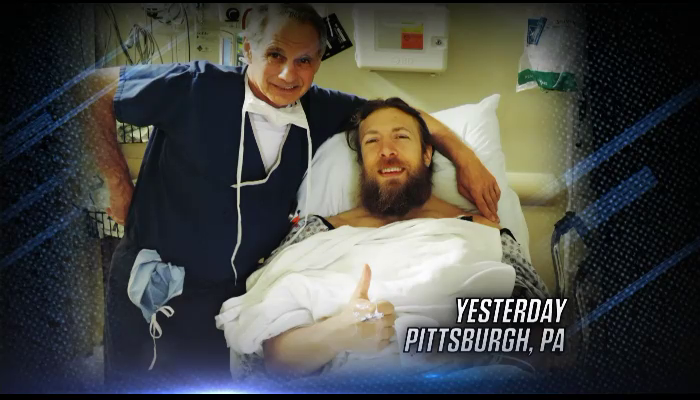 Next week on Raw, we will find out the state of the WWE World Heavyweight Championship from the Authority.

Instead of just one of the Wyatt family members entering the ring, all three of them decide to jump Cena until the Usos come out and stand beside our hero. It was all Cena’s idea! When we return from commercials, Bray sends Erick Rowan into the ring to fight. Lots of brawling stuff from Rowan. He throws Cena out in front of Bray and then tosses him into the steps. Bray approves. Back inside, Rowan grinds his knuckles into Cena’s forehead. Vintage Sgt. Slaughter. Cena just has NOTHING to answer with against Rowan’s offense right now. Rowan grabs the bearhug and everything, but Cena won’t quit. In fact, he NEVER GIVES UP. Cena hits the Protobomb and Five Knuckle Shuffle out of nowhere. Rowan cuts off the AA though and hits John with a fallaway slam. He looks to finish off Cena, but he charges into the STF. Here comes Luke Harper to help out his comrade, but the Usos TCB with superkicks and stereo suicide dives. Meanwhile, Rowan gets up and Clawhold Slams Cena. Cover, 1-2-NO! Cena counters the Pumphandle Backbreaker and lands the Attitude Adjustment after all for the win. (8:30) Get ready for ‘last man standing’. Pretty fun match, but Rowan is definitely the greenest of the three Wyatt family members. *½

You can easily predict there was a six-man tag dark match after this, but I had work in the morning and didn’t stay to see it. I was disappointed that neither the Shield nor Bad News Barrett was on the show, but they were pretty involved on Raw this past week. In my opinion though, check out WWE Main Event for a more fun show than this edition of Smackdown.

Until next week, so long for now.