Cole and JBL talk up the Shield/Wyatt Family match set for Elimination Chamber. Rollins starts off with Christian and brings him over to tag in Reigns. Christian avoids a powerslam and tags in Sheamus – who is clearly better suited against a guy like Reigns. Sheamus wins a battle of fisticuffs and hits a Finlay Roll for two. Tag to Ambrose, Sheamus runs him down with a Polish Hammer and tags in Bryan. Yes Kicks, back flip out of the corner, duck the clothesline, and connect with the running elbow on Ambrose. Running Dropkick in the corner is followed by the Super Headscissors. YES Lock on Ambrose and the Shield try to make the save, causing a standoff between the two teams as we go to commercial. When we come back, Bryan escapes Rollins and tags in Sheamus. He punishes Rollins with the forearm smashes to the chest on the apron. Ambrose causes a distraction while Sheamus is climbing to the top turnbuckle, Rollins enziguri kicks him down, and then Reigns connects with the vertical leap sliding dropkick on the apron. Now *that’s* teamwork. Back inside, the Shield look to terrorize Sheamus. During a headlock spot, Sheamus reaches for a tag and Reigns releases the hold to knock Bryan off the apron. Meanwhile, Reigns mouths to Christian “what are you gonna do?”, which is awesome. Reigns turns back around into the Irish Curse backbreaker. Rollins tags in and tries to stop the tag, but fails miserably. Hot tag to Christian, he is all over Ambrose. When he goes for the Bossman uppercut, Rollins eats it instead. Back in, he lands a tornado DDT on Ambrose for two. Rollins and Reigns break up the pin, but then Bryan knocks them over with a double Owen Hart missile dropkick! With Rollins and Reigns on their knees, Bryan takes turns on them with the Yes Kicks. He goes for the Knockout Blow on Reigns, but gets lifted up onto Reigns shoulders. Bryan punches back and headscissors Reigns to the floor. He follows up and drills Reigns with a suicide dive, but then Bryan stands up and takes a suicide dive from Rollins! Back in the ring, Rollins eats the Brogue Kick. Christian goes for the Killswitch on Ambrose, but Ambrose ducks a Brogue Kick that nails Christian instead. Whoops. Spear to Sheamus by Reigns! Ambrose jumps on top of Christian for the 1-2-3. (9:30 shown) I’m always a fan of six-man tags when the talent is this strong. This was all action and no nonsense. ***

Elsewhere, Zeb Colter bribes Smackdown GM Vickie Guerrero with a heart-shaped box of chocolates to get her to give Jack Swagger a shot at the IC title since his other Real American Cesaro already has a WWE title match at Elimination Chamber. Vickie agrees to give Jack Swagger an IC title match if he can beat Rey Mysterio. Colter feels good about those odds, so Vickie makes it worse for him by making a fatal four-way match tonight to determine a #1 contender for the IC title, also giving Mark Henry and Kofi Kingston a chance for an IC title match as well.

One thing Big E needs to work on is his personality. Gee whiz. Everyone wants to get rid of Henry to start. Kofi and Rey manage to do that together with stereo dropkicks to his front and back side. They run the ropes and kick each other around until Swagger interrupts. He’s quickly dumped outside again with a tilt-a-whirl headscissors by Rey. When Mysterio looks for a dive, Kingston cuts him off with a clothesline. Instead, Kofi takes out Swagger with a somersault plancha. Meanwhile, Rey gives Kofi a seated senton off the apron. Henry teases a dive, but of course Swagger cuts him off. He gives Henry a couple Swagger Bombs to take him out of the match again. Kofi knocks Swagger down on the ropes, Rey kicks Kofi out of the ring, and looks for the 6-1-9. Unfortunately for Mysterio, Swagger cuts him off with a clothesline of his own. Mysterio starts moving again and delivers another tilt-a-whirl headscissors and a wheelbarrow bulldog just like the old days. In comes Kingston, Rey misses a corner charge and runs his shoulder into the post. Kofi, meanwhile, sets up Swagger for the Boom Drop. Swagger catches Kingston up top and here comes Henry for a possible Tower of Doom spot. Henry instead just takes Swagger down with a powerbomb, leaving Kingston still sitting on the top turnbuckle. Rey gets booted away by Henry. Kofi hits a double sledge to stagger Henry, but then runs into a clothesline. Henry breaks loose of the Patriot Lock, but then takes the 6-1-9 to the belly, and then receives Trouble in Paradise. With Henry gone, Swagger delivers a Double German Suplex on Kofi and Rey! Well, that was awesome. Rey puts Swagger in position for the 6-1-9 again, but Kofi cuts him off with Trouble in Paradise! Kofi covers, but Henry pulls Rey out to the floor to stop the count. Kofi kicks Henry away and skins-the-cat into the Patriot Lock! He escapes, but Trouble in Paradise gets him in trouble as Swagger catches the kick right back into the Patriot Lock – this time for the tapout. (8:30) Being the only heel in the match, the outcome is kind of obvious. However, it’s still a fun ride all the way to the end. ***¼

Time for the Raw Rebound. Raw is Betty, everyone. For details, check out Scott’s Raw Recap.

Goldust and Cody handle the New Age Outlaws to start. The Usos take over and drop double-team elbows on Road Dogg. Jey Uso gets caught on the wrong side of town though. Axel and Ryback abuse this man for a few minutes to take us into a break. When we return, Jey breaks away from Gunn and makes the hot tag to Jimmy. He’s taking on all four men here. Samoan Drop to Road Dogg, Bubba Bomb to Billy. With the Outlaws laid out in different corners, Jimmy buttalanches their faces. Axel saves the day, but Rhodes sends him out and double-jump springboard splashes him out on the floor. Ryback tosses Cody into the barricade, but then Ryback turns around into a cannonball splash from Goldust. Meanwhile, the Usos deliver stereo superkicks to Road Dogg. While Jey planchas onto the crowd, Jimmy hits the flying splash on Road Dogg for the win. (8:30 shown) So it looks like the New Age Outlaws are just the transitional champs to finally put tag team gold on the Usos. **½

Renee Young meets with WWE World Champion Randy Orton. Does he think he’s being treated unfairly by having to defend his WWE World Title in the Elimination Chamber? Orton feels the Authority has his back no matter what and as far as Cesaro is concerned, he’s going to get the Viper tonight. SCARY!

A fresh vignette hyping Alexander Rusev and Lana. As a fan of the Americans TV show, I’m somewhat interested in this guy as a character.

Titus O’Neil joins us for commentary. He gives Cole a pack of Tic-Tacs for Valentine’s Day. Funniest thing he’s ever done. Sandow goes for his finish, but Young counters to an inside cradle of sorts and gets the shockingly fast win. (1:10) When you’re jobbing to Darren Young, you should just hang up your boots, pal. Titus reacts with a post-match beatdown, but then Young fights back and rips off O’Neil’s pants. ¼*

– Fandango (w/Summer Rae) vs. The Miz

Miz is serious about getting that Figure-Four over as a finisher as he starts on Fandango’s knee almost immediately. Fandango stops Miz’s signature corner clothesline with a clothesline of his own. Miz punches back, but then runs into a dropkick. Miz escapes a chinlock and delivers the backbreaker/neckbreaker combo. Now he randomly wants the Figure-Four, but Fandango kicks him off into the ringpost. And what do you know, Santino Marella’s music hits and out he comes with Emma from NXT. Of course, Summer Rae isn’t too crazy about this chick, and they get into a fight. When Fandango turns his attention to Santino, he takes the COBRA in the throat. Miz takes advantage and hits the Skull Crushing Finale for the win. (3:45) I sense a mixed-tag match possibly for WrestleMania 30. ¾*

In the weekly (no longer) WWE.com exclusive interview with COOHHH, he calls Cesaro the “dark horse” of the Elimination Chamber match who could possibly leave the PPV with the WWE world title. 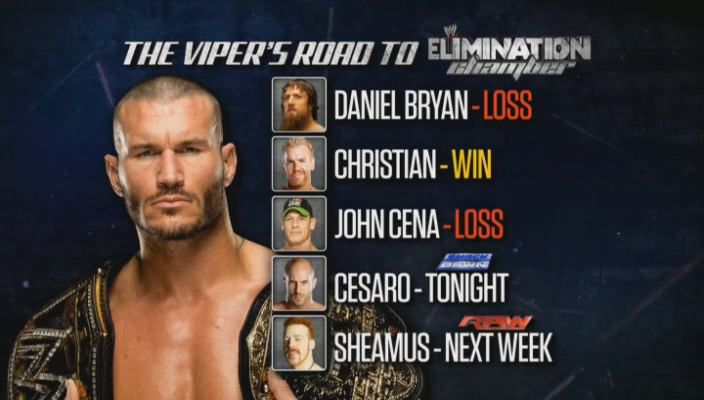 Cesaro tries to get a quick win on Orton to start, but Orton keeps ducking out to the floor after each nearfall so Cesaro can’t capitalize. Back inside, Cesaro hits the gutwrench suplex for two. With a corner whip, Orton explodes out with a clothesline. Cesaro fires back with European uppercuts for a nearfall. To the floor we go, Orton tosses Cesaro back and forth into the barricades in the aisleway. He heads back inside to pose as we go to commercial. When we return, Orton is giving Cesaro a back suplex onto the barricade. Cesaro gets his face smashed on the announce table before they head back inside. Orton clamps on a chinlock. Cesaro escapes and wins a battle of European uppercuts, as if there was any doubt. Back to the floor, Cesaro gets tired of being sent into the barricade as he angrily runs Orton down with a clothesline. Back inside, Cesaro avoids the DDT through the ropes and spins Orton around with the Cesaro Swing! Orton sells the effects of the swing REALLY well as Cesaro looks for the Neutralizer. Orton backdrops him over, but Cesaro lands on his feet, and then runs into a powerslam. Colter tries to motivate Cesaro back into this match. Orton hits the DDT through the ropes, points to the WrestleMania 30 sign, and starts banging on the mat setting up for an RKO. When Orton pounces on Cesaro, he gets nailed with a European uppercut! Very European Uppercut to Orton! Cover, 1-2-NO! Orton avoids a corner charge and dropkicks Cesaro down for a nearfall. As Cesaro rolls to the apron, Orton bounces his head off the ringpost, and tries for a superplex. Cesaro fights him off and delivers a sunset flip powerbomb. Discus European Uppercut! With Orton staggered, Cesaro can deliver the Neutralizer this time and gets the 1-2-3! (10:15 shown) With that win, Cole thinks Cesaro is no longer a “dark horse” and considers him a player in the Chamber match. After the bell, Cesaro and Colter point at the WrestleMania 30 sign while Orton holds his head in his hands. Good to see the crowd really behind Cesaro tonight. With Punk gone, he’s now my favorite wrestler in the company. ***¼

Final Thoughts: Great show tonight. This is the *new* best episode of Smackdown since I started recapping back in July with three very solid matches that are all building towards the Elimination Chamber PPV.