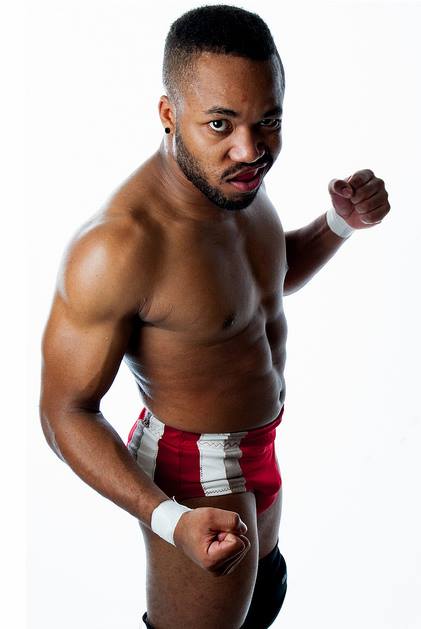 Beyond has a Youtube subscription where they put up all of their shows for $9.99 a month. This show was presented on Floslam.tv.

Gresham has been positioned as a huge player in Beyond winning a feud with Zack Sabre Jr. in the Summer. He continues his tour of facing some of the biggest indy stars in the world facing off against Ricochet here.

I’ve been pretty vocal in my support of both of these guys to the point that I’ve got both of them solidly in my top 10 for the WDKW100. Ricochet has shown so much this year in a wide variety of styles and depth of psychology. Gresham on the other hand has always had a similar level of well rounded skill but in 2016 he has really stepped it up as a complete package.

They start it out with a mix of mat wrestling with quick rolling and flips to show off both of their prowess. Ricochet has a personality that is boisterous with quips throughout as he makes everything look so easy. Ricochet wants you to think this is nothing to him but you know how hard he’s working to be able to keep it up with Gresham’s more focused and serious demeanor. Gresham takes over with offense that is akint to that constant pressure of a river constantly eroding the rocks. Gresham gives up nothing easy. If you want to counter Gresham you’re going to have to work for it but Ricochet of this day is ready for it. Ricochet can sell with the best of them quickly making you buy in to the control Gresham firmly has. I have to give a shout out to Drew Cordeiro on commentary here as he puts over the attack of the arm by Gresham but still plays up that with Ricochet’s ability to use unorthodox flying moves that he can still uncork amazing offense with a bad arm. Ricochet puts over the arm work pinning it to his side throughout the match. It feels that with the weakened arm Ricochet is vulnerable to more attacks from Gresham. On paper this is a match I was insanely excited for but again commentary this time by Veda does a great job to put over that others might see this as an odd pair but really they are evenly matched in so many ways. Gresham is all over the arm the whole time using that weakness anytime Ricochet seems to be able to match him. Gresham goes after the arm and is instantly in the advantage. Ricochet is a wounded animal as he is forced to get more serious but is it too late? They do a fast paced closing sequence that I know is meant to fire up the crowd but felt too tacked on and forced for me as a bad example of a fighting spirit spot. Gresham keeps working over the arm and eventually get’s the octopus rides it to the mat with hammer fists to the back of the neck and shoulder for the submission.

This match was all about cocky over confident Ricochet and focused Gresham. Gresham showed Ricochet that he was not someone to take lightly here no matter how world traveled you are as he was doing all that in the dark ages when the footage wasn’t easy to come by so it didn’t get the same fanfare. If this match had more build and didn’t seem to have a tacked on hot finish I could see this in MOTY territory. That being said with just what it was still I give it ****.

A key ingredient for a successful indy is protecting your guys. Even though it isn’t as prominent as it was in years gone by, we can see the ramifications of a promotion owning you head to head can have on the overall perception of the promotion as a whole. The case study of this is Ring of Honor with New Japan. Gresham is someone that on paper can’t match up to international superstar. However, if you are following Beyond as a promotion it should come as no surprise that Gresham was easily seen as an equal to Ricochet throughout this match.

The match overall was a joy to watch and showed the strength of both men. Gresham can do some great, tight knit engaging ground work. Ricochet has the ability to sell those moves and also improvise his usual dazzling array of high flying around the area that has been targeted. There was a great cat and mouse feel throughout and also the diversity of both guys styles were on display. In the end, Gresham is able to secure the victory and it felt like another notch on his accession to becoming the ace of Beyond. ****