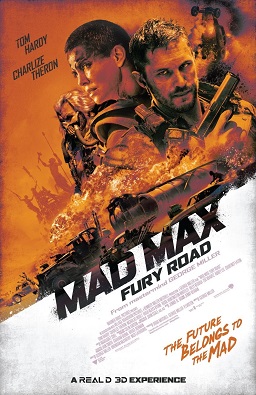 I won’t bother lying. I’ve not seen the original Mad Max trilogy. I just never got around to it. (Quite honestly, I’m not a huge Mel Gibson fan.) I went into Mad Max: Fury Road knowing only that it had Tom Hardy, Charlize Theron and a post apocalyptic setting. Pretty much mentally blind to what I should expect. The one thing I hadn’t considered is that it would reinvigorate my love of cinema in a time when I was growing weary of the blockbuster culture.

In a post apocalyptic earth in which water and gasoline are commodities, cult leader Immortan Joe reigns supreme. When Imperator Furiosa rebels to free Joe’s enslaved wives, a chase begins on the Fury Road. Caught in the middle is Max, a man haunted by his past, and who wants nothing more than to survive and be left alone.

The story doesn’t shove exposition down your throat, instead opting to thrust you into this world at full speed and taking you along for the ride. It trusts the fact that you will pick it up along the way. It doesn’t need to be all about Max for it to show him off. It’s about women taking control of their lives, and the way in which it packs that punch is extremely effective. It’s a thrilling narrative with spectacle and message, and it gets everything across without belittling the audience.

Mad Max: Fury Road packs as much art and story into a blockbuster as you possibly can. It’s a large scale spectacle full of beautifully executed stunts that defy what was once thought possible. The film is essentially a 2 hour car chase, but easily one of the greatest of all time. The design of the film is remarkable too. Whereas most films set after the fall of civilization opt for the pale, beige, dust aesthetic, Mad Max has a fully immersive color palette which shifts depending on the stakes of the scene. 80% of the film is done with practical effects, and the end result is a gritty, graspable, realism. (Or as much as you can pack into a film with mutant cult members after the end of the world). Honestly, this movie is insane in the best possible fashion.

In a time in which when the lack of equality in Hollywood is as obvious as ever, Mad Max: Fury Road packs a wholloping punch for feminism in action movies. Despite Max being the title character, it’s really Furiosa’s story. Furiousa is a strong, capable woman who can kick an ass, drive a war rig, fire a gun, and own it. The other women in the story are not behind either, taking the offensive and showing that there really is no reason why women can’t drive an action movie aside Michael Bay putting Megan Fox in short shorts and a tube top. (THE IRONY BEHIND THAT CLAIM: Rosie Huntington-Whiteley who was god awful in Transformers: Dark of the Moon, is outstanding in her role here.) And the best part is that giving the female characters strong roles and developed personalities outside of sexualization is that it does nothing to lessen the power of Max himself. He is just as strong of a character.

Tom Hardy seems to love wearing a mask (in this case a cage) and putting on a voice, but it’s something that he does so very well. He does have the arc of the loner who changes their mind, but it’s done with that limited speaking and physicality that only Tom Hardy can seem to pull off. There’s a meat to his role. He’s the lead, but he’s comfortable not being the center of attention. He’s mad, but not out of his element.

Charlize Theron still ranks as my favorite actress currently working in the business. Her commitment to the role is what truly steals the show. She takes control of a situation, leads the charge, and gives depth to Furiosa. It’s a brilliant counter to Tom Hardy, and just as badass.

At the Movies Entertainment Movies Podcasts