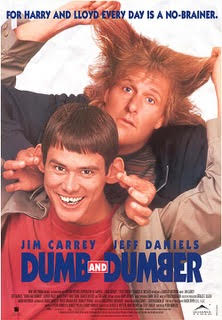 In the sixth episode of Laugh-In Theater, host Andy Atherton is joined by Jennifer Smith (Freak-Out Drive-In) to do a live watch of the 1994 comedy, Dumb and Dumber. They discuss the betrayal that almost dooms Harry and Lloyd’s friendship; Jenny’s interest in becoming a bartender; the legend of Sea Bass; the insane haircuts sported by the two main characters; all of the birds in the movie including poor Petey; the Pretty Woman-esque montage; and the Farrelly Brothers setting most of their movies in Providence. So, don’t spill the salt, suck back on grandpa’s old cough medicine, and don’t forget it’s okay, I’m a limo driver!