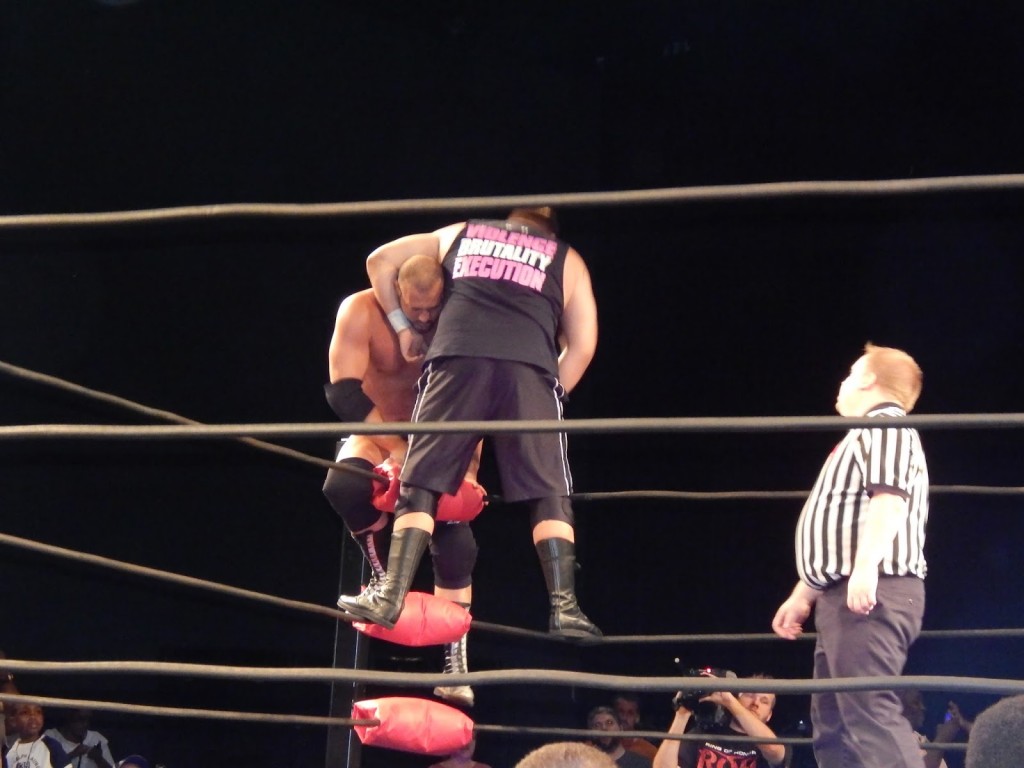 We open with video package centered around ROH eliminating SCUM and the genesis of the World Title Tournament and a few promos from along the way. After the opening animation, we head to a promo from Adam Cole, who discusses the stakes on the line for tonight. He will face Tommaso Ciampa in the semifinals and vows he will advance to the title match. Then we head inside the National Guard Armory in Philadelphia, PA, KK sets the stage and we are officially under way.

Cole is out first and KK talks about the interesting path he has taken to get here, doing whatever he has had to do in order to pick up wins in advance. Ciampa has a chance for a very interesting two days, as he gets a crack at ROH gold tonight and will be getting married tomorrow. Nigel McGuinness is back in the booth this week, thankfully. After a staredown, Ciampa catches Cole trying for a quick start and sends him careening back to the corner. He stomps away, but Cole comes back and rattles him. Ciampa avoids the Florida Key but Cole sends him to the floor and follows with a tope. These two are off to a hot start and the Philly fans are rocking. Ciampa quickly regains control on the floor, cracking Cole with running knees, driving him into the barricade. He tops that by powerbombing Cole into the barricade and then kneeing him the face. Ciampa is all sorts of fired up here. He pulls up the protective mat and takes Cole over with a suplex, sending us to break.

When we return, Cole has fought his way into control and uses a Shining Wizard to wipe out Ciampa. KK & Nigel talk about Ciampa’s brace and how it could be slowing him down a bit. Things spill back outside as they continue to trade offense at a high rate. Cole gains the advantage and picks up a near fall. Ciampa comes back with a Burning Hammer for two. He keeps pouring it on, following more knees up with a top rope Kryptonite Crunch for a near fall. Nigel discusses the success of Ciampa’s game plan so far, while KK talks about how Cole wanted to start fast and win quickly. Both men end up on the buckles, but Ciampa blocks a sunset bomb. Cole stays strong and superkicks Ciampa’s repaired knee. Cole wastes no time beating the knee up, ramming it into the post repeatedly before hooking on a figure four around the post. Cole fends off a comeback attempt and gets another figure four, this time in the center of the ring. Ciampa starts slugging his way back as Nigel calls out Cole for slowing his attack on the knee. He finally does kick it, following by a Shining Wizard for two. They botch a powerbomb spot but comeback with a quick reversal sequence, capped by a Ciampa clothesline and PC for a close near fall. Ciampa’s knee buckles as he charges in, leading to a a suplex neckbreaker and another figure four. Great psychology in this match, with Cole constantly going back to the knee. The pressure is too much and Ciampa passes out as the referee counts three, giving Cole the win. That was a really good match, with tons of focused psychology blended with high impact offense. Nice showing by Ciampa in this tournament and I think his stock has been rebuilt nicely with this run. Cole is in the final…can he get one last win? Time will tell.

We are back from break and get an intense promo from Michael Elgin, followed by clips of how Elgin advanced to the semifinals. KK reiterates that Elgin was looked at as the favorite for this tournament and reminds us how he refused to accept the vacant title as a handout. The package also includes a look at the build for this match in particular, including their history together. The setup is capped with a promo from Kevin Steen, who is wearing a tuxedo t-shirt.

This one should be a war. Elgin is out first, followed by Steen. KK talks about how Steen has changed, thanks to SCUM being gone, allowing him to return to just being himself. After a break, we come back to the start of the match with a lockup and feeling out period. KK said many pundits thought Elgin would be the one to end Steen’s epic reign, but he came up short and it drove him nuts. Nigel talks about Steen’s ever present smirk. Elgin is a fucking house, my Lord. Steen tries to wear Elgin down with a front facelock, but Elgin powers out and starts to work the arm. Elgin blocks a package piledriver, but can’t hit the bucklebomb. Steen bails to the floor and slows the pace up a bit. Back inside, we get a good old fashioned test of strength, monkey flips included. The two horses trade chops, fists and headbutts, each trying to be the first to wrest away full control. Elgin is able to knock Steen down and actually hits a moonsault off the middle rope for a near fall. Elgin continues to work over Steen before crushing him with a big elevated sidewalk slam to take us to another break.

When we return, Steen catches Elgin with a boot to the chest as he is getting back in the ring and then snaps him down with a hanging DDT. And now it is Steen’s turn to fly as he comes off the top with a cross body for a near fall. Elgin ducks a clothesline, leading to a big collision in the middle of the ring, wiping both out. The heavy blows continue to come as Elgin is just cracking Steen with stiff clotheslines to the chest. Steen runs into the steel post on a charge but grabs the ropes to break the Elgin crossface. Elgin tries for the deadlift superplex, but Steen just shoves him to the mat and follows with a senton splash off the top rope. I enjoy seeing these guys fly around, mixing the offense up. Elgin catches a charging Steen with a chokeslam but eats some knees on a corkscrew senton attempt. Steen capitalizes with an F-Cinq for a near fall. That takes us to our final break of the night. Coming out of break, Steen comes up empty on a cannonball, which allows Elgin to hit a deadlift German into a bridge. That is hella strength, right there kids. Elgin goes back to the crossface, but Steen again gets to the ropes. With both back up, the heavy blows return as they are standing toe-to-toe and trading fists. Steen catches him with a pop-up powerbomb, but Elgin slips out of the package piledriver and hits a deadlift powerbomb. He follows that with a bucklebomb, but Steen bounces out and grabs the sharpshooter. Elgin’s strength is just amazing. Steen reverses a crossface into a roll up but Elgin wriggles free. Elgin cracks Steen in the back of the head, but Steen catches him with a lariat and sleeper suplex for a close near fall. Steen drags Elgin up, but his arm is too injured to hit the package piledriver, so instead he unleashes a pair of sleeper suplexes. Elgin somehow bounces up and hits a desperation clothesline. Both men are slow to get up, but Elgin again dodges a package piledriver and transitions into the crossface and this time Steen finally taps out. Wow, that was the war I expected. Elgin advances and the final is all set up. This was as good as you would expect and both men worked hard as always and even mixed up the offense.

Well, it would be hard to find anything wrong with this hour of ROH TV as there was two great matches and zero fluff or down time. Great stuff and the final should be damn good as well. And next week, we find out who will be the new ROH World Champion. Until then, take care and respect the code!