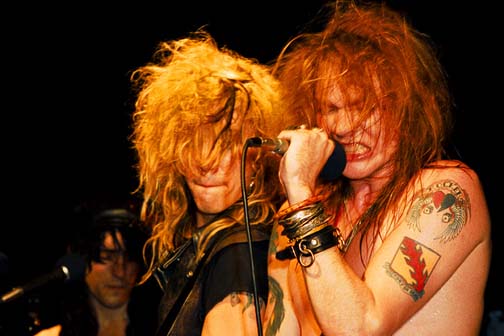 On December 19, 1982, W. Axl Rose left Lafayette, Indiana, and all the troubles it had brought him, behind for good. He jumped on a Greyhound bus bound for Los Angeles, California. An interest in and love for music that had begun in his youth, and turned into more of an obsession as he grew up, was leading him towards a future with three options: success, jail, or death.

His journey west would not be without incident. “When I was first coming to Los Angeles, I was about eighteen or nineteen. This guy told me I could crash at his hotel. I went to sleep and woke up while this guy was trying to rape me. I threw him down on the floor. He came at me again. I went running for the door. He came at me. I pinned him between the door and the wall. I had a straight razor, and I pulled the razor and said, ‘Don’t ever touch me! Don’t ever think about touching me! Don’t touch yourself and think about me! Nothing!’ Then I grabbed my stuff and split with no place to go, no sleep, in the middle of nowhere outside of St. Louis. That’s why I have the attitude I have.”

His arrival at the bus station immediately discarded any illusions he’d had about “La-La Land.” ”I’d been down to the downtown-L.A. Greyhound bus station. If you haven’t been there, you can’t say shit to me about what goes on and about my point of view. There are a large number of black men selling stolen jewelry, crack, heroin and pot, and most of the drugs are bogus. Rip-off artists selling parking spaces to parking lots that there’s no charge for. Trying to misguide every kid that gets off the bus and doesn’t quite know where he’s at or where to go, trying to take the person for whatever they’ve got. That’s how I hit town.”

However, Axl would experience some help on his way into LA, help he appreciated, and eventually memorialized in his most controversial song. “I’d never been in a city this big and was fortunate enough to have this black dude help me find my way. He guided me to the RTD station and showed me what bus to take, because I couldn’t get a straight answer out of anybody. He wasn’t after my money or anything. It was more like, ‘Here’s a new kid in town, and he looks like he might get into trouble down here. Lemme help him get on his way.’”

These experiences at the genesis of his Los Angeles experience would spawn songs such as “Welcome To The Jungle,” which would eventually be his most recognizable hit, and “One In A Million,” a song that nearly broke up the original band and got him blacklisted. That song would leave Axl forever marked as a racist and a homophobe. No matter how he tried, whether it was referencing friendships with Eazy-E and Ice T, or explaining his heroes were Elton John and Freddie Mercury, to even releasing an epic song that can be taken as an apology, “Madagascar,” in some circles, Axl never escaped that reputation.

Once Axl arrived and hit the Sunset Strip, he began his search for his friend from Lafayette, Izzy Stradlin. Izzy was in the heavy metal band “Shire,” and had begun to play rhythm guitar. He was also becoming a prolific songwriter, stocking away material for a future that was not yet clear. Axl wound up in his first band, Rapidfire. They recorded a four song demo at the start of the summer in 1983, but something wasn’t right. Axl moved on quickly.

Later in the year, Axl, along with Izzy, and a mutual friend Chris Weber, formed Hollywood Rose. They recorded a five song demo, which included songs such as “Reckless Life,” “Anything Goes,” and “Shadow Of Your Love. However, during a gig, Weber accidentally hit Axl in the head with his guitar, and he was fired from the band. Izzy left the band shortly after this, not only displeased at Weber’s sacking, but at the addition of a new guitarist, named Slash. Slash had been in a band named Road Crew, and was turning some heads with his trademark look, and his bluesy licks.

Izzy went on to join the band “London.” Slash’s friend, drummer Steven Adler joined Hollywood Rose, but the pieces just didn’t fit the puzzle yet, and the band disbanded in late 1984. Axl went on to be the lead singer for LA Guns, a band that featured one of the first friends he made in LA, who was also his former roommate, Tracii Guns. Slash went on to audition for a new band that was forming at the time, named “Poison.” He wasn’t hired due to not fitting the band’s image, and a rock n roll angel got its wings.

During that time in the LA scene, it was common for musicians to jump bands, rejoin bands, and all sorts of interesting friendships, lineups, and collaborations were spawned because of this. Once Axl soured on LA Guns, Hollywood Rose was reunited, with the lineup including Axl, Izzy, Chris Weber, Rob Gardener and Steve Darrow. Weber wound up leaving the band to move to New York City, and Tracii from LA Guns was drafted to replace him.

Since the members of this “new band” were remnants of both Hollywood Rose and LA Guns, Tracii and Axl worked out a new name for them: Guns N’ Roses. The original lineup that performed under the name Guns N’ Roses was Axl Rose, Izzy Stradlin, Tracii Guns, Ole Beich, and Rob Gardener. However, Tracii began to flake out and miss practices, and Axl was tiring of the revolving door of both musicians and bands. He was ready to begin to take things to the next level, and began to seriously consider working towards a record contract.

First, Ole Beich was given the boot, and replaced by a Seattle transplant with a punk attitude named Michael “Duff” McKagan. Then, Tracii was fired, and Slash was brought back into the fold, with Izzy no longer hesitant to work with him. Along with Slash, once again, came drummer Steven Adler. Whether or not any of them felt that this combination would finally be the one to get them the fame, money, and women that they craved, who knows? But something was about to happen to change their perspective.

Duff had booked a series of gigs from Sacramento to Seattle, using all his old contacts, for a band to perform under the name “Guns N’ Roses.” However, now that tour was set to begin in just days, and this lineup had just been set. After just four days of rehearsal, the new Guns N’ Roses, Axl, Izzy, Slash, Duff, and Steven would hit the road. On that trip, they “had set a new benchmark for what we were capable of, what we could and would put ourselves through to achieve our goals as a band,” according to Duff McKagan.

After a car breaking down, trying to hitchhike to the gigs, freezing on the side of the roads, starving together, getting wasted together, performing together, and fighting together, the five men in that lineup of Guns N’ Roses had found what they were looking for. And Axl Rose had found the musical partners, and the backing that would lead him, his lyrics, and his personal demons to the top of the musical charts and in front of the eyes of the world.