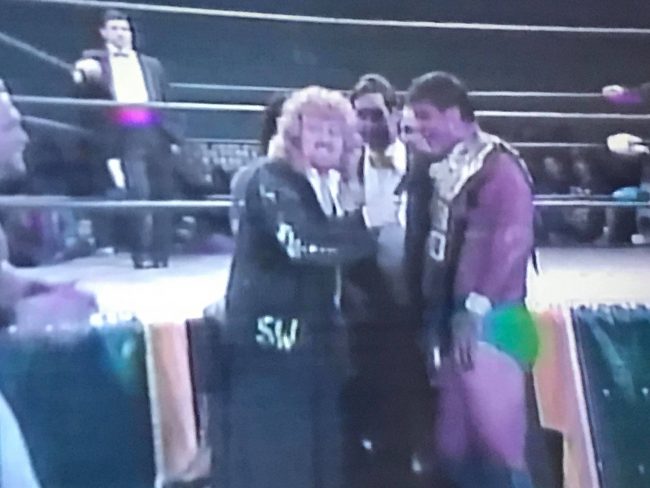 Not too much to choose from here so I will go with the Gilbert & Snuka squash of Osbourne & Cairo and that is mainly because of Paul E’ sharp commentary. He was excellent throughout that match. Snuka & Gilbert did a nice job with their heel work too, lots of cheating and double teaming and douchebaggery peppered in. Not the strongest Best Segment winner, but it was fun enough to win this week. Honorable mention to the final moments of Sandman vs. Muraco, from when Peaches attacked Paul E through the finish was quite good.

Paul E. Dangerously racks up another W here. He was really good in the first segment, offering Stevie Wonderful a BS gig so he can take over on commentary, and then he killed it in the booth. He is so far above nearly everyone in this promotion right now as his natural charisma and big league polish just overshadows whoever he is working with from segment-to-segment.

I am a bit surprised how much the have marginalized Glen Osbourne. Not that long ago, he was a finalist in the TV Title tournament and presented as a high level face. Now he is slumming it alongside Tommy Cairo, basically getting squashed by Eddie Gilbert and Jimmy Snuka. I don’t think he is an elite talent or anything, but he I thought he was effective in his role and a solid enough worker to be protected a bit more.

Jay Sulli’s yellow bowtie/cummerbund combo this week… yikes; Paul E. using Stevie Wonderful for “scouting” so he can take his announce spot is good stuff; a large chunk of the early part of the episode is just a replay of last week’s Tag Team Title match; Looks like Sal is done cosplaying as SD #3 for now; Bellomo is really the workhorse in this match, for better or worse; “Big pizza splash”; Snuka & Gilbert have a great heel presence; “The Madman from the Badlands!”; Paul E. giving a formal bio of Eddie is pretty funny; Gilbert & Snuka had a great heel squash filled with cheating even though I felt like it was a waste of Glen Osbourne; Max Thrasher’s hockey mask is certainly something; The Breaking News cut-in with Jay Sulli in his casual wear was well done, hyping up all the upcoming big matches on SportsChannel and the Summer Sizzler event; The title match was fine but both guys are obviously pretty limited; Peaches attacking Paul E was great and then Rebel shows up and yanks her down and kicks her like an asshole; Rebel finally gets his revenge, assisting Muraco in taking Sandman’s title; This was the weakest effort in a while, hopefully next week is a bounce back but it did get a slight bump for the big Heavyweight Title change