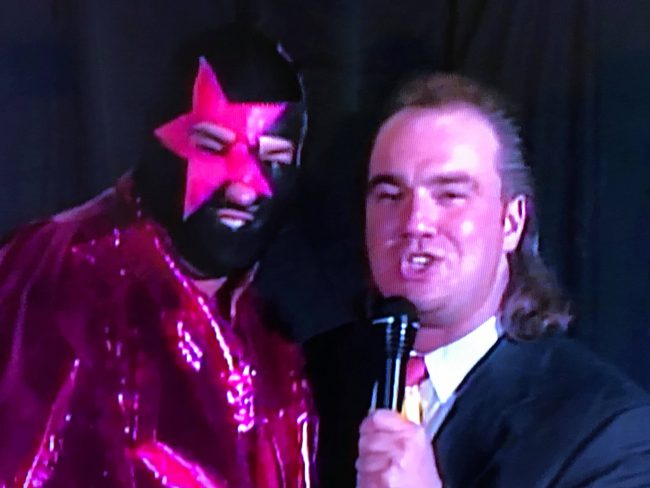 I thought we had a few different contenders this week but Superbly Snuka vs. Road Warrior Hawk really impressed me given their combined age and potential chemistry issues. It was one of the best ECW TV matches to date and both guys really kept just chugging along into the shaky finish. Snuka has been great each week and Hawk shockingly worked really well alongside him.

Lots of choices this week but I will go with Eddie Glbert. His promo outside was top notch and sold the shit out of the Summer Sizzler showdown. His practice chain match was well done and he also got involved in two other brawls too, including the fireball attack. Strong showing for Hot Stuff this week.

I wa shocked by Hawk’s in ring performance. When we last saw him in the WWF in 1992 he wasn’t very good but here he stepped it up and emptied the tank against Jimmy Snuka. His prematch promo was good too. I didn’t really care for him no selling the post match beatdown but at least it was paid off with the fire attack.

Wrestling fireballs!; Jonathan Hotbody’s rainbow tights are as 90s as it gets

Stevie Wonderful is back!; So is Jay Sulli’s terrible yellow bowtie and cummerbund; Having the kids mob Hawk was a nice touch; I really enjoyed Snuka and Paul’s backstage promo; Snuka has eschewed the boots this week, back to his old ways, which Sulli also calls out; “Hawk has this menacing motorcycle boots on” – Sulli; The ropes seem super loose this week; Hawk vs. Snuka was surprisingly feisty even though the fuck finish was pretty obvious; Hawk no selling the entire Dangerous Alliance was a bit much but at least the fireball kept him down; Another loaded card this week with multiple title matches and all the stars; The Blondes did all they could but the Destroyers are pretty limited; Sal Bellomo wandering out munching on cake was pretty funny; Why is Sulli acting like we have never seeing Richard Michaels before when he was introduced last week?; The strong hype for the Super Summer Sizzler continues here too; Eddie Gilbert’s promo on Funk was fantastic; What the hell kind of name is Herve’?; I like that we get a practice chain match here to put over the concept; Funk talking all about ECW and Philly being hardcore was interesting; All of the promos hyping Summer Sizzler were really damn sharp; Funk was really aggressive in his match and that kept it pretty entertaining; This really ended up being a loaded episode and all the final Sizzler hype was top notch