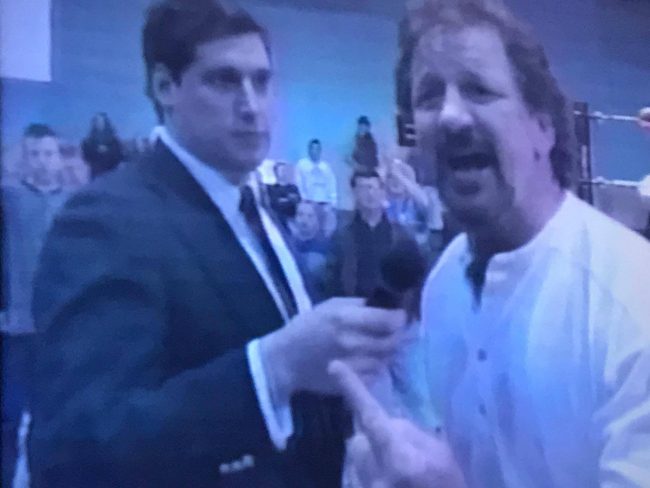 There was some good stuff in here, especially all of the brawls, but I thought the Sandman/Rebel fight was the best because it was hot, built an angle well and gives some much needed credibility to the Rebel. The whole scene was chaotic and Rebel came off like a real prick the way he shoved around Peaches and then destroyed Sandman with the surfboard. Good stuff.

Gilbert, his attack, interference and great Funk impression. I really enjoyed Snuka giggling as Gilbert was mocking the Funker. He was great in offering Glen Osbourne a chance to walk out on their match and lose without getting beaten up. He is such an asshole. Funk is a close second, just for his excellent promo toward the end of the show. Classic fired up, pissed off Funker.

After a couple weeks of jawjacking, it caught me off guard when things between Terry Funk and Eddie Gilbert finally got personal. Gilbert really beat the piss out of him and then Funk returned later to get some revenge and cut a tremendous promo.

Not too much this week besides Glen Osbourne’s paint and gimmick. We had some neon stuff in here and Larry Winters’ mullet made a brief cameo, but that is about it.

Jay Sulli looks and acts like he is on a hostage video when he opens the show; I love how Stevie Wonderful brings out Eddie Gilbert to start every episode even though he isn’t ever the guest commentator; And again we get some good Gilbert vs. Funk sniping to open up; The Super Ds looked a lot better this week and Funk ripping Hunter Q. right to his face was pretty funny; Gilbert beating down Funk with a chair was a nice surprise and well done, finally escalating their issue to violence; Gilbert wearing Funk’s hat after beating him up was a good touch; Stevie asking Jay why they call a ring a “squared circle” made me chuckle; Snuka’s Superfly Splash is really rugged these days, he is just destroying guys with it; No offense to Glenn Butler, but I just have a hard time seeing a dude named Glen as wild, maniacal badass wrestler; Gilbert vs. Osbourne has been a bit disappointing, quite slow and not as hot as I expected; Gilbert bleeding helped a bit though; I really didn’t like the finish where Jay Sulli told the referee that Gilbert cheated and he reversed the decision, makes Osbourne look like a goof, but at least it led to Funk returning for another brawl; The brawl between Rebel and Sandman was really good, especially Sulli yelling “He may be dead!”; “You got surf boards! Women! People going crazy!”-Tod Gordon; Gordon says ECW is a “Hardcore Haven”; Good call to have Snuka win the title with help from Gilbert, adding lots of heat to Hot Stuff International