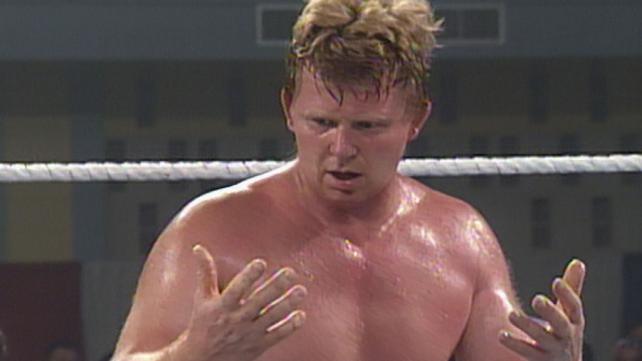 Twenty years ago today, WWF fans were set to receive a special treat with a somewhat rare WWF Heavyweight Title match on the syndicated SuperStars program. By 1994, SuperStars was a fairly sleepy program with occasional storyline developments mixed in with established stars battling enhancement talent as they worked their way up the ladder. Sure, there was still a rogue title change on Saturday mornings (most recently when Diesel upended Razor Ramon for the Intercontinental Title in April) but the big belt had never changed hands on the program. Since kicking off his second WWF World Title reign back at WrestleMania X, Bret Hart had mainly been embroiled in a feud with his brother Owen, the man that had defeated him earlier that night, and a side issue with Diesel and Shawn Michaels. At King of the Ring, Bret’s former partner Jim Neidhart returned to the scene and stabbed him in the back, siding with Owen and helping the youngest Hart win the crown. As the company was pushing ahead towards SummerSlam, it was revealed that the Hart brothers would tussle inside a steel cage with the gold on the line. With such a big match on tap for the summer’s biggest show, Bret’s oddly placed title defense against Bob Backlund on a late July episode of SuperStars was lining up to be a flaccid, albeit well worked, affair to just eat up a week of the Hitman’s reign. The story heading in was that Backlund had been scuffling over the past year and wanted one last crack at the Championship he once wore so proudly, so Bret, being the fighting champion that he was, offered Backlund a shot. Most knew Hart wouldn’t lose this one and since Backlund had been floating so aimlessly, it really felt a challenger-du-jour type of affair. After a couple weeks of hype, we arrived in Ocean City, MD on July 30 and our World Title match was slated in the two hole on the card. Following a Diesel squash, the stage was set: was Backlund going to fulfill his dream of regaining his long missing title? Or would Bret continue to roll for SummerSlam? What followed next was a shock to just about everyone.

Backlund would jog to the ring first as Jim Ross and Jerry Lawler set the stage for the bout. Even Howard Finkel really gave it a hard sell in his introduction of Backlund. As an aside, Ross was temporarily filling in for Vince McMahon at this point. Ross had been fired earlier in the year but when McMahon was called to trial by the federal government, Ross was rehired to fill in as needed. It would work out well that he was given the opportunity to call this style of match. He would heavily push the story that Backlund hadn’t held the belt in nearly ten years and has been waiting ten years for a rematch that had never come. Oh, and Backlund was still contending that he never really lost as his manager Arnold Skaaland had tossed in the towel while he was caught in the camel clutch.That was a point Backlund made multiple times in the weeks heading into this bout.

Backlund and Hart would feel each other out early, jockeying for position and resetting multiple times. Despite the small venue, the crowd definitely was buzzing here, knowing they were witness to a rare SuperStars World Title match. Backlund was really aggressive early on as well, chasing after Hart when he rolled to the floor for a respite. On commentary, Lawler also continued to harp that Hart had taken this challenge lightly while this match was Backlund’s entire world at the moment. And those points were evidenced for sure as Backlund was going all out in grounding Hart and staying on top of him. As I mentioned before, Ross was a perfect fit for this style of match and did a really good job of both calling the action and pushing the story forward while debating Lawler. Once Hart got his bearings, he started to work the arm and attempt to slow Backlund down finally. Backlund’s impressive strength was on display as he power lifted Bret and back suplexed him to attempt to break a hammerlock, but Bret held on and continued to work it. Lawler would opine that Hart’s mind was prone to wandering to Owen and Neidhart at points here and that it could cost him. Again, great focused commentary that also covered some ancillary stuff but did it in a way that blended into the story of the match as opposed to detracting from it.

After some fairly peaceful mat work, Bret woke things up with an elbow to the back of the head. While slightly rattled and with both men on their knees, Backlund set himself and clocked Bret with a stiff forearm to the face, rattling the champion and sending him crumpling backwards off to the mat. The crowd fed off that exchange and you could feel the tone starting to shift. Lawler would sniff out that Bret was starting to change his style out of desperation and it did seem that way as he began to use more strikes. Backlund cut that off quickly with a nicely executed piledriver for a close near fall.

After a commercial break, Backlund was still wearing down Bret but came up empty on a second piledriver attempt, giving Bret an opening. As Lawler was wondering if Backlund was running out of gas, he was able to grab Bret into an abdominal stretch before doing whatever he could to roll Bret into a pin attempt. After both men tumbled to the floor, Hart came back strong and began to attack the lower back but Backlund again battled right back, slamming Bret hard to the mat. I love the flow here with both guys drifting through offense and defense with no lengthy heat segment. The near falls really started to pick up here with Backlund doing whatever he could to attempt the Crossface Chicken Wing but Hart was able to wriggle free each time. As Bret somewhat gained mount position, laying across Backlund’s torso, Backlund impressively bridged up twice to force him off and over into a backslide for a two count. This is a real template of how this style of match should be built, both factoring in style and story. Lawler now shifted from questioning Backlund’s stamina to wondering if he had the ability and instinct to put Hart away. For as much grief as I give Lawler about his announcing, he has been great here.

With Backlund dropping down off a criss-cross, Hart tripped over him and tumbled to the floor, seemingly hurting himself in the process. Again acting aggressively, Backlund chased him out and chucked him back in the ring where he a perfect back suplex for another near fall. He followed that up with a small package for a super close near fall, but when Bret kicked out, the challenger was clearly frustrated, thinking he had the three count. And that moment cost him. Hart would pounce and cradle Backlund to grab the win and retain his title. “Ten years down the drain, Backlund!” yelled Lawler as Bret celebrated and Backlund paced around the ring trying to argue his point for the previous near fall. I love the emotion here as Bret is acting like he survived a really close call and Backlund is just exasperated, the way a fading athlete would be after missing out at that perceived final shot at glory. Great stuff and it is all called out on commentary as well, icing on the cake.

You could see Backlund was seething on the inside as he extended his hand and congratulated Hart, who then continued to celebrate. Ross even wondered if Backlund would call it a career after a loss like this. The celebration continued on and Backlund still lingered and this is when you started to realize something may be up. For some reason, Hart walked over and tried for another handshake. Lawler called him out immediately, saying it made it seem like Hart was rubbing it in Backlund’s face. And then, an angry Backlund finally snapped, refusing to shake hands and then slapping Hart across the face. As the boos cascaded down, Backlund locked in the CFCW while screaming maniacally. As referees poured into the ring, Backlund refused to break until he was finally pried off. Backlund would roll to his knees and stare at his hands in disbelief, unsure of what he had just done, as Hart rolled in agony, gripping his shoulder in pain. Ross hit a great line here: “If this is the end, what a sad end for what I have always considered a very honorable man”. Boom. Backlund quickly stomped away as Lawler capped things off by saying “If he had done that during the match, he would carrying the title with him right now.”

It has been twenty years but this whole package still holds up completely. The match is still a lot of fun, the commentary was great and the turn at the end was picture perfect. I also loved the thread woven throughout the match that this could be Backlund’s last go because it added so much gravity and so much meaning to the match. You could feel Backlund’s desperation and his exasperation and shock when he lost. I loved the slap to the face too because it rang off just being pissed off that this asshole Champion wanted to shake hands again. Fantastic.

After this match, Backlund began to hone his character, ranting and raving about being screwed and never having lost the title in 1983. He would take out his aggression on wrestlers, officials and even magazine writers. This all crested at Survivor Series, when Backlund did the unthinkable and defeated Hart in a submission match to win the WWF World Title, nearly 11 years since he had last held it. And in some beautiful storytelling, he won thanks to Bret’s family throwing in the towel.

This match and storyline is proof of how great wrestling can be when done right and how easy it can be if you are smart about it. It also shows how quickly a career and legacy can be twisted around in the blink of an eye. In June 1994, Backlund’s comeback was dead in the water and his return was bound to be a footnote written by Brian Shields for the WWE Encyclopedia. Instead, with one slap of the face, his career surged and he built a whole new persona out of one fantastic moment. Twenty years ago today, Mr. Backlund was officially born. What a great day it was.