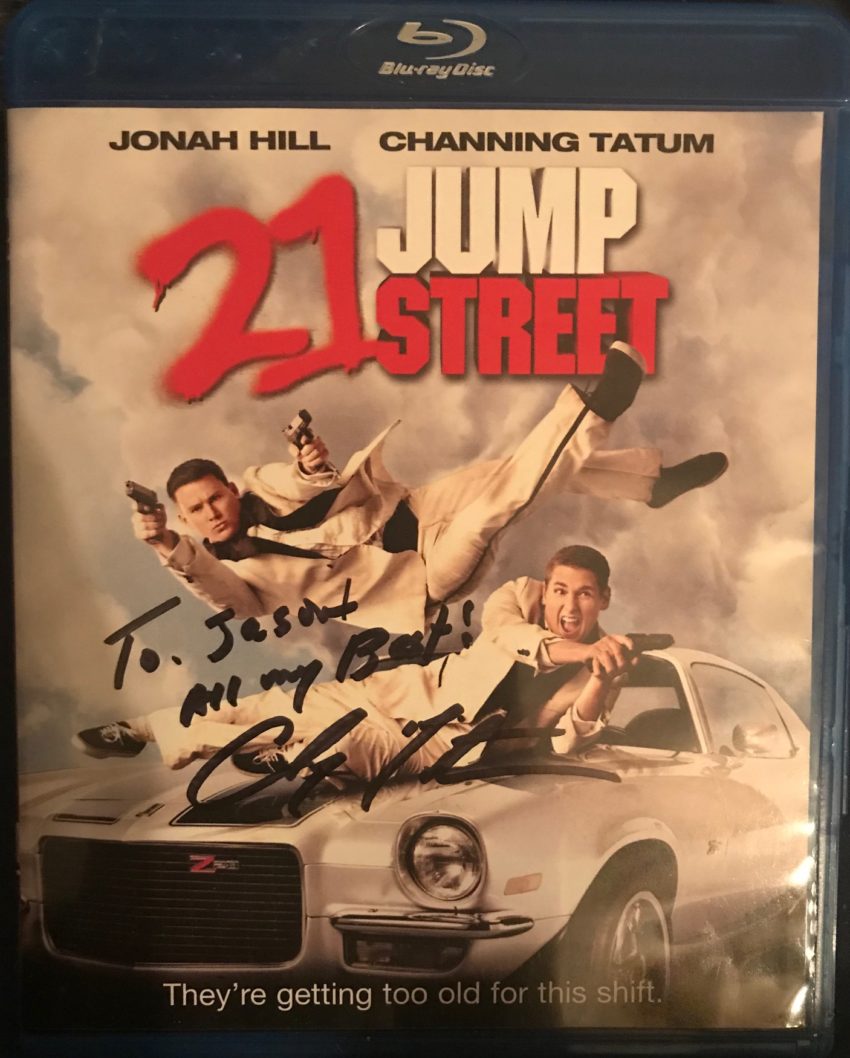 Hey everyone, and welcome to the second edition of Jason’s DVD Deep Dive! What we are doing here is going through my incredibly massive blu ray and DVD collection and simply reviewing the films. One by one in alphabetical order, starting with the blu rays.

The movie we will be talking about today is the 2012 action/comedy directed by Christopher Miller and Peter Lord, based on the hit TV show from the 80’s, 21 Jump Street. It stars Jonah Hill (Superbad), Channing Tatum (Magic Mike) and Brie Larson (Captain Marvel).

The Plot: The film starts in a flashback in 2005 showing the “nerd” Schmidt (Jonah Hill) and the popular jock, Jenko (Channing Tatum). Schmidt gets rejected asking a popular pretty girl and made fun of by Jenko, while Jenko then gets called to the office to be told his bad grades will keep him out of prom and he will barely graduate high school. They have a bit of a moment crying on opposite benches hinting that maybe these two are a lot more alike than previously thought. Flash forward seven years and these two meet again at the police academy. Jenko is good at the physical stuff and Schmidt is better with the written stuff. They decide to help each other out. They develop a bond, become best friends and graduate the academy together.

Their dreams of being “bad ass” cops aren’t brought to fruition as we see them as bike cops covering a public park. After we see them with their rudimentary nonsense they deal with on a daily basis, Jenko spots members of the 1%ers, a known motorcycle gang. He sees them smoking pot so they approach them and search their bikes and find cocaine. A chase ensues. Schmidt is not able to apprehend his suspect and it is shown that he is very hesitant about general police activity. Jenko catches the leader, Domingo (DeRay Davis). It’s the guys first major bust.

They show up to the station, acting like they made the biggest arrest in history, only to find out from Deputy Chief Hardy (Nick Offerman) that they had to release Domingo as Jenko didn’t properly read him the Miranda rights. That’s where they are informed they are being transferred to a rebooted police program from the 80’s for “younger” looking police officers called 21 Jump Street. They show up there greeted by their new captain, Captain Dickson (Ice Cube). They then get informed of their first mission as part of Jump Street. Billiam Willingham (Johnny Simmons), a student of Sagan High School, dies after OD’ing on a drug called HFS (Holy Fucking Shit). They are given identities as as Brad (Hill) and Doug (Tatum) McQuaid. While at the school, it is learned that high school isn’t exactly what it used to be in 2005. Schmidt becomes popular as he befriend popular kid and HFS dealer Eric (Dave Franco) and pretty girl Molly (Bree Larson). Jenko becomes friend with a group of science nerds in his chemistry class as they start to find the source and supplier of HFS. Jenko and Schmidt also buy and are forced to take HFS as we see the affects on them and are also approached by coach Walters (Rob Riggle).

Schmidt and Jenko decide to throw a party at Schmidt’s parents house to become closer to the students and to gain their trust. During the party a fight breaks out between Schmidt, Jenko and people from a rival high school. Schmidt wins the fight and gains the trust of the popular kids. While that was happening, the science kids hacked Eric’s phone so they can listen in on conversations.

A few days later, at a party at Eric’s, Jenko is listening in and hears of a meetup between Eric and the supplier, but also overhear Schmidt talking shit about Jenko. The rift between the two grows deeper as they follow Eric to a meetup with what turns out to be the 1%ers. Jenko and Schmidt follow them and their in-fighting causes a problem in pursuit and they have to evade the gang and they do so, successfully. The police chase causes Schmidt to miss a play he was cast in with Molly and is slipping deeper and deeper into this undercover persona. As he takes the stage as Peter Pan, an angry Jenko attacks him and they fight, which in turn causes them to get expelled. They also get fired from Jump Street.

Eric, being stressed out and nervous, decides to reach out to Schmidt and Jenko to use them as extra muscle for the major upcoming deal at prom. As the two get dressed, they rekindle their friendship. While at the prom, Schmidt meets up with Molly and learns she has taken HFS as Schmidt admits to her that he is a cop. Jenko has his science friends listen in on everything. They join Eric to head up to a room where they finally meet the supplier, Coach Walters. While there, the 1%ers show up as Jenko and Schmidt try to hide their identities as cops. Molly shows up at the door and exposes Schmidt as a cop. At that point the 1%ers recognize Schmidt and Jenko and a major gunfight ensues as Walters takes Molly hostage and two of the gang members reveal themselves to be undercover DEA agents Tom Hanson (Johnny Depp) and Doug Penhall (Peter DeLuise), former members of the Jump Street division from the 80’s. A major gunfight ensues and many people get shot and murdered…including Hanson and Penhall.

Walters and Eric take off while still holding Molly hostage in one limo, as the 1%ers are in another followed by Jenko and Schmidt. While in pursuit, Jenko makes a bomb using a bottle of liquor that he learned from his science friends in AP Bio and blows up the limo carrying the gang. Final confrontation comes as Walters is there with Molly opposite Jenko and Schmidt. It is learned that Jenko is out of ammo. Walters goes to shoot Schmidt but Jenko takes the bullet for him. He encourages Schmidt that he can do it as Schmidt successfully shoots Walters, as he literally shoots his dick off.

The cops show up. Walters and Eric are arrested and Schmidt confronts Molly and apologizes for everything, they then kiss. They show back up to Jump Street and they are greeted with a hero’s welcome. Chief Dickson then informs them that they are going to college, much to Schmidt’s delight and Jenko’s dismay.

The Acting: The Good: Everyone is very good in this movie. It is very funny and everyone hits their beats perfectly. Tatum and Hill are brilliant together. This is the first time I was introduced to Franco and Larson and they were both great. Small roles from Elle Kemper (The Office), Jake Johnson (New Girl) and Chris Parnell (30 Rock) really enhanced this movie. Especially the appearances from 21 Jump Street alumni Holly Robinson-Peete, Peter DeLuise and Johnny Depp. Depp and DeLuise especially as they were unrecognizable throughout the entire film until the reveal at the end.

The Bad: if I had one complaint, it would be Rob Riggle. While he was ok…his over the top nature was somewhat irritating at times.

Best Performance: I cannot sing the praises of Channing Tatum enough. I would’ve never known that he would’ve had such amazing comedic timing. Made me a big fan of his.

The Review: This movie is easily one of my favorite comedies of all time. I cannot sing the praises of this film enough. It still holds up as a great comedy and is extremely well written and acted. Very highly recommend this movie.