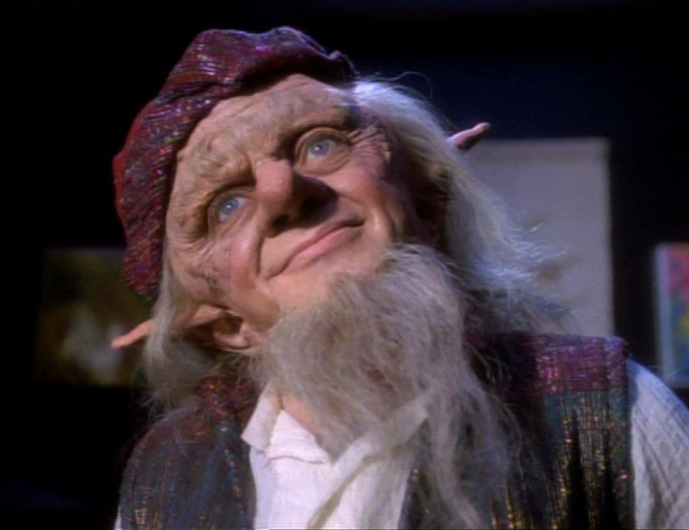 If the previous episode was a step forward in Deep Space Nine‘s progression toward the type of heightened character-based drama it will later showcase to great acclaim, “If Wishes Were Horses” is the seemingly requisite step back into the safe and the mundane, the sort of story that a Star Trek writing staff of this era can seemingly dash off in its sleep with the judicious application of a few character beats to a stock Trek plot. An anomaly in nearby space seems to cause things imagined by the denizens of Deep Space Nine to appear, hilarity and embarrassment ensue until, in a twist, the anomaly turns out to be another figment of the crew’s imagination, and several of the imagined beings turn out to be members of a strange unknown race seeking to explore the alien concept of “imagination.”

Each element of the plot, at that level of reduction, is a well-worn Trek cliché: the spatial anomaly is entirely forgivable as its vagueness provides an opening to nearly any ensuing plot; manifestations of crew members’ imaginations previously cropped up in the original series’ “Shore Leave” and The Next Generation‘s “Where No One Has Gone Before,” both also in their respective shows’ first seasons; the advanced race merely using the main cast as unknowing objects of experimentation is a long-lasting trope of the original series (occurring most notably in “Arena” and “Errand of Mercy”) and would go on to recur in episodes of Voyager and Enterprise as well, the latter series engaging with it in the final season, as of this writing, that Star Trek was in production for television, bringing things full circle over the course of thirty-eight years.

These plot elements are presented fairly straightforwardly, aside perhaps from the switch from one stock Star Trek plot to another in its final minutes, but this blandness has a point; more interesting than the precise movings of the plot is the way that “If Wishes Were Horses” fits into Deep Space Nine‘s ongoing genre play. Thus far the series has seen fit to switch between genres depending on which characters are being featured in a particular episode, until “The Storyteller,” which was largely about the characters trying to determine which genre their story was taking place in. “If Wishes Were Horses” uses these genres as more granular entities that it can separate from each character, in the form of the figments of each character’s imagination, and collide with each other as well as the stock Star Trek plot that serves as a template. The episode begins that process before the plot is set in motion, when Odo is aghast to see Jake Sisko heading toward one of Quark’s holosuites, already infamous as a futuristic brothel, before Quark assures him that Jake was wearing a “baseball mitten” and only plays the antiquated human game. Quark is making a shift into family entertainment — as well as continuing to run what is basically a holographic brothel. There’s no reason why genres can’t peacefully coexist for the sake of turning a tidy profit. 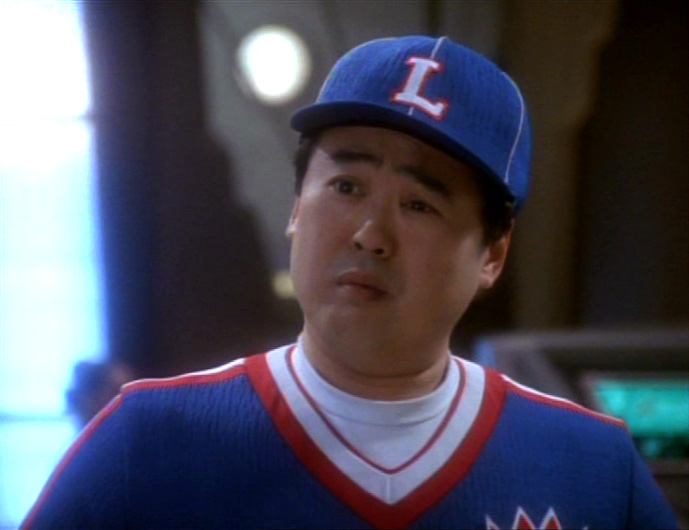 The most endearing of the episode’s three main fantastical imaginings grows from the Siskos’ baseball program: Buck Bokai, star shortstop for the London Kings. Michael Piller and Ira Steven Behr loved baseball, and so the Siskos love baseball. Buck Bokai was the germ of “If Wishes Were Horses,” the original pitch for which was basically that Jake would bring a baseball player home from the holosuite; some of Bokai’s dialogue, such as when he remembers Ben Sisko cheering in the stands of a simulation of the final World Series, betrays the episode’s original premise as a standard-issue holodeck malfunction story (mere months after The Next Generation presented “Ship in a Bottle”), but the switch to the aliens’ exploration of imagination allows the Bokai avatar to experience Sisko’s connection to the historical Bokai. It’s the simplest of the main characters’ creations — simply walking out of the holosuite — but through it Sisko reveals himself to be a man of deep nostalgia, with a warm affection for a man who might as well be a figure of myth and legend (with the addition of a detailed stat sheet). The Bokai avatar’s explanation at the end of the episode that he and the others followed a ship through the wormhole also offers yet another Gamma Quadrant species that eschews Starfleet’s idea of diplomacy, opting instead for this method of fanciful infiltration.

That Major Kira imagines fire, and a person on fire running toward her, is distinctly generic in terms of “If Wishes Were Horses,” but in the context of “Progress” it takes on great pathos, even while using mere seconds of screen time.

Odo’s imagination, once it makes an appearance despite Quark’s suspicions that it doesn’t exist, provides a vision of something that would be truly impossible for the show to provide — Quark, imprisoned, screaming pointlessly for aid. Odo says at the beginning of the episode that imagination is a waste of time — “too many people dream of places they’ll never go, wish for things they’ll never have” — and while the one product of his imagination fits well within his job description, the structure of the series keeps it from being feasible. The sarcastic rivalry between Odo and Quark has hardly started, and for Odo to properly jail Quark for his many crimes would give it an ending where it benefits greatly from having none. Meanwhile his deadpan announcement that the denizens of Quark’s bar, replete in their devoutly-wished-for winnings, should please stop using their imaginations, is of course the sort of role only Odo can fill at this point in the series.

Chief O’Brien’s fantasy, of course, comes directly from the intersection of mythology and his family, as Rumpelstiltskin bounds out of his daughter Molly’s bedtime story. Clearly O’Brien has learned a thing or two about dramatic readings since “The Storyteller,” and his engagement with the mythic makes him wary of the apparent powers of the fairy tale character who appears in his quarters; it’s this trepidation, bordering on fear, that the entity portraying Rumpelstiltskin finds most fascinating, and it runs deep enough that when he offers to save the station from the anomaly at the cost of O’Brien’s first-born child, O’Brien almost considers the offer. (Almost.) After all, if there’s enough alchemy in the air that everyone on the station is creating objects and people by imagining them, why couldn’t a fairytale creature whose main occupation is turning base materials into gold offer salvation? This is also the far better version of O’Brien’s role in “If Wishes Were Horses,” as the first drafts of the script had a leprechaun coming to life and menacing the O’Briens; Colm Meaney strenuously objected, noting both that Irish actors spend large parts of their careers trying to get away from leprechauns and that “using caricatures or clichés of any nation is not something Star Trek is or should be into,” this last showing the importance of the cast, as much as anyone else with a creative role in the production, in realizing a forward-thinking vision worthy of Star Trek‘s reputation.

Bashir’s genre, as suggested when he’s awakened by his fantastical version of Dax, is the wet dream — or, if it must be placed in a literary genre, the Penthouse letter. (“I never thought it would happen to me…there I was in my quarters, sleeping in full uniform, when Dax crawled on top of me!”) At the beginning of the episode, to remind anyone in the audience who might have forgotten Bashir’s one-sided infatuation with Jadzia Dax, we are shown Bashir at his most obnoxious and pathetic, practically begging Dax to have some romantic interest in him. “You are constantly in my thoughts,” he moans melodramatically. “You’re driving a stake through my heart,” he reports when Dax graciously calls him a wonderful friend. After a “high-pitched sonic shower” joke Bashir retires to his quarters, where we see him vigorously dreaming before his fantasy-Dax appears. Where Dax’s contribution to the episode thus far has been a polite and friendly statement that she has no romantic interest in Bashir, the fantasy-Dax’s only character trait is that she does. She makes her entrance by throwing herself at him; she hangs off of him at any available opportunity; she fawns over him almost unceasingly. To call this the nadir of Nice Guy Julian Bashir is too easy…and, regrettably, might not even be accurate considering some of the turns his character takes far in the show’s future. At the very least it’s a local minimum. Quark’s fantasy, two conventionally-attractive women who hang on his arms and accompany him to unseen escapades, is at least more honest.

Of course, there are limits to this reading — certainly the mere act of naming a thing as problematic has limited utility, and “If Wishes Were Horses” deserves some credit for complicating Bashir’s fantasy somewhat. The real Dax takes a mature view on the fantasy-Dax, understanding that everyone has fantasies they’d rather not bring out in a staff meeting (in what could be read as a response to the privacy concerns that went unremarked upon in “Hollow Pursuits”) while still calling into question what the content of his fantasy says about Bashir’s tastes in women. Part of Dax’s characterization as a three-hundred-year-old gestalt entity, after all, is the understanding that everyone else on the show is drastically young in comparison. (“How is our young doctor?” “Young.”) And While Bashir does almost consummate his fantasy before the plot draws him out of his quarters, his reactions to the fantasy-Dax otherwise range from disbelief at a thing that seems too good to be true, to actively prioritizing his role as a member of the crew over more personal concerns. At first he thinks Dax’s come-on is some sort of prank, then he’s the first crew member to reject the projection so forcefully that it disappears for a time, then when she appears to be hurt he treats her like any patient, without ever taking advantage of the disconnect between the fantasy-Dax and the real Dax. A determinedly generous reading would suggest that Bashir loses his romantic & sexual interest in the fantasy-Dax when she reveals herself to have none of the intellect or personality of the real Dax, that she is in effect a cheap facsimile who would replicate one, but only one, aspect of the relationship he claims to want. This reading might seem more likely had Bashir not begged Dax to have feelings for him that she does not have, but it’s not totally without support. 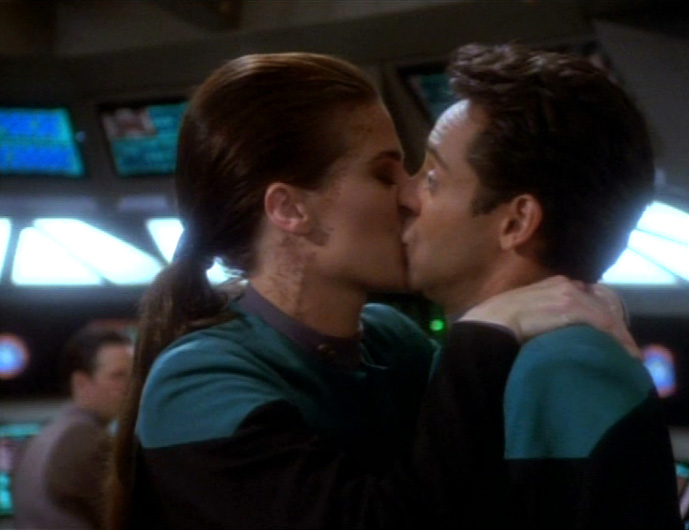 Dax’s fantasy, meanwhile, ties everything else together and provides the episode’s diegetic threat to the station as well as a tacit extradiegetic threat: she imagines she’s in a stereotypical episode of The Next Generation. Strange events can be reduced to the effects of a spacial anomaly, and solved via some light technobabble. It’s one more genre and one more set of Trek clichés that serves to unite the others and lead into what is becoming Deep Space Nine‘s signature brand of transmutation: as the symbol becomes the object, and as that which is imagined has populated the characters’ reality, they are able to collectively will a reset button into being and undo what has been done.

All intruding genres must ultimately be rejected, in favor of Deep Space Nine qua Deep Space Nine. Likewise, the alien presence must evaporate, though not without residue. Sisko receives one final gift from his dear Buck Bokai: his baseball, another object that takes on totemic importance over the course of the series. 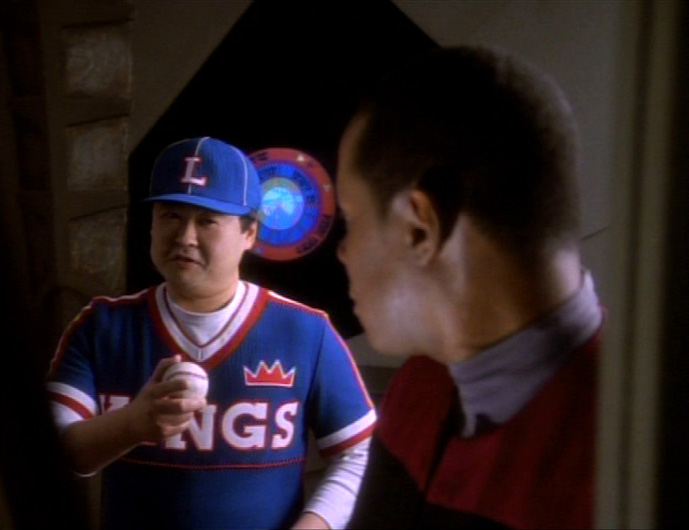