In 1997, two of the greatest artists of all time got together for a conversation about their passion and their profession when Ted Williams and Tony Gwynn sat down to talk about the art of hitting a baseball.

It was like Van Gogh and Rembrandt. Or Da Vinci and Michelangelo. Scorsese and Kubrick.

Both Ted Williams and Tony Gwynn were students of hitting a baseball. They loved it, worshipped it, lived it, and always sought out new ideas to try. If the idea made them better, it became part of their routine. If not, away it went.*

*Williams once received a letter from a 14-year-old fan who suggested that “Teddy Ballgame” could hit the ball harder with a drier bat. Williams tossed his bats into a clubhouse clothes dryer at Fenway Park. It worked and became part of Williams’ routine. Gwynn, for his part, was struggling in the minors to adjust to use a wooden bat after playing college ball with aluminum. So, he began using shorter, lighter models. It worked. It stuck.

While both were among the finest craftsmen even to swing a bat, the two were drastically different in their results.

Williams spent 19 years in the Major Leagues, all with the Boston Red Sox. He hit .344 with 521 career home runs and was known as “The Greatest Hitter Who Ever Lived.”

Gwynn, who passed away Monday morning at the age of 54, played 20 years for the San Diego Padres. He hit .338, but was primarily what would be considered a “slap hitter” or a “contact hitter”. Gwynn, affectionately known as “Mr. Padre,” hit just 135 home runs in his career with a career high of 17 round-trippers in 1997.*

*Williams, after meeting Gwynn, chided him for his lack of power, telling Gwynn that he used a “toothpick” for a bat.

Both men are linked not only through their love of hitting, but their connections to San Diego, California. Williams was born in San Diego in 1918 and played his high school baseball at Hoover High School. He is, arguably, the city’s most famous native, and is probably only rivaled by the man called “Mr. Padre” as the city’s top ballplayer.

Williams was generally perceived as a loner. A grouch, a grump. A jerk. His public persona was the opposite of Gwynn, a man who was rarely seen not smiling. He was well-liked, it seems, by everyone who played with — or against — him. In the past few days, the stories of what a great person Gwynn was have been plentiful.

Gwynn was born May 9, 1960, in Los Angeles, California, the middle child of three boys. Growing up, Gwynn’s favorite sport was basketball and he ended up a highly-recruited point guard at Long Beach Polytechnic High School before heading to San Diego State University in 1977. During his first two years at SDSU, Gwynn only played for the basketball team; decided to join the baseball team in 1979.

Gwynn ended up being a two-time baseball All-American for the Aztecs, and was twice named to the Western Athletic Conference all-conference second team for his basketball achievements. He still holds the school records for assists in a game, season, and career.

After retiring from MLB, Gwynn would go on to coach at SDSU, where the Aztecs played home games at, fittingly enough, Tony Gwynn Stadium.

In 1981, Gwynn was drafted by both the San Diego Padres and the San Diego (now L.A.) Clippers on the same day. He was a second round pick, 58th overall, by the Padres, and a 10th round choice for the Clippers.*

*Gwynn was drafted six spots after John Elway, who was picked by the Yankees with the 52nd pick.

Gwynn chose baseball over basketball and spent about two years in the Padres’ minor-league system. He made his major-league debut on July 19, 1982 against the Philadelphia Phillies. He went 1-for-4 on the day, with his first ML hit being a double off Sid Monge. He ended up batting .289 for the year — the only time in his career that Gwynn would hit below .300. 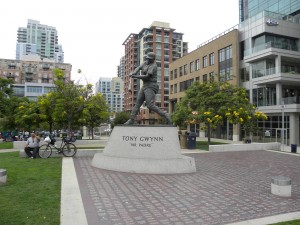 In addition to his nickname of “Mr. Padre,” Gwynn was also known as “Captain Video” for his dedication to analyzing hitting through the use of video recordings. He was famed for taking his VCR on road trips so he could continue to watch himself away from home.

Gwynn was always the most prepared hitter on the field any given game. He was a true artist, and like any artist, he was dedicated to his craft. The dedication paid off in spades, as Gwynn captured eight National League batting championships, tied with Pirates’ great Honus Wagner for the most in N.L. history*; he led his league in hits seven times; was a 15-time All-Star, and played on both of the Padres’ pennant-winning teams, in 1984 and 1998.

*Ty Cobb holds the MLB record, with 12 batting championships during his 24-year career.

In 1994, Gwynn batted .394 in a bid to become the first man to bat .400 in a season since Williams hit .406 in 1941. The players’ strike put an premature end to Gwynn’s chase, but cemented his status as one of the greatest hitters of any generation.

He was elected to the Baseball Hall of Fame in his first year of eligibility with 97.6 percent of the vote, the seventh highest vote percentage in history.

Gwynn struck out just 434 times in his entire career, with a career-high of 40 in 1988. To put that in perspective, the Phillies’ Ryan Howard currently leads all of baseball with 89 strikeouts — including 36 in the month of May alone.

Those 36 strikeouts would represent the second-highest total of Gwynn’s career.

Think about that. Gwynn was so very good at putting the bat on the ball — often cited as the most difficult task in all of sport — and he did it as good, or better, than just about anyone else who ever played the game.

Even the best pitchers could not get Gwynn to swing and miss. He faced Greg Maddux, Curt Schilling and Pedro Martinez a total of 186 times and struck out just twice. Twice.

His legacy is one that preaches the value of always being prepared, always doing the best you can with the tools you have, and putting in the work to get where you wish to be.