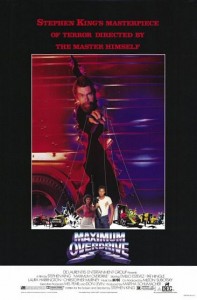 Plot: A group of people try to survive when machines start to come alive and become homicidal.

Review: WE MADE YOU!

Stephen King is well-known for horror novels that have scared millions if not billions of people. His books over the years have been turned into quite a few movies. For the most part they’re all very good films, provided the source material is strong and the people behind the film know what they’re doing. With Maximum Overdrive, Stephen King decided that writing the story wasn’t enough, but he needed to direct the film as well.

The movie takes place on June 19th, 1987. The Earth passes through the tail of a rogue comet and we know this because the film starts with a crawl explaining what’s going on. Then we open to a number of incidents around the world showing all sorts of mechanic devices coming to life and controlling themselves. For example, the opening scene has a moment on a bridge that is being raised on its own, crushing a number of people in cars. Meanwhile, cars, trucks, soda machines and steam rollers are attacking and killing people thanks to the comet.

After we get a grip as to what’s going on we meet Bill (Estevez), a recently paroled inmate working his first shift at the Dixie Boy truck stop. We then meet our cast: Wanda June (a waitress), Hendershot (owner of the Dixie Boy), Brett (a female hitchhiker) and some truck drivers. It’s not long before the machines start coming alive with an electric knife carving up Wanda June’s arm and an arcade machine killing one of its players.

Soon enough the Dixie Boy comes under attack by a number of big rig trucks. The leader is the Happy Toyz truck, which has the creepiest, gigantic Green Goblin face mounted to the front of the grill. The truck drivers along with the workers of the Dixie Boy sit as trucks start to pile in. Sometimes people wonder outside and get killed, others show up like a newlywed couple (Curtis and Connie). Soon enough it becomes clear why the trucks are coming to the Dixie Boy, they need gas.

A jeep housing an M60 machine gun uses Morse code to tell the people at Dixie Boy they need gas and it’s here we get the first (and possibly only) gas filling montage in movie history. Eventually the tanks run dry, but wouldn’t you know it, a gas tanker shows up. During all of this, Bill discovers Hendershots underground bunker of weapons and Bill decides the remaining survivors should fight their way to an island off the coast where machines are not present. The survivors make their way to the marina, blow up the Green Goblin, then set sail.  A disclaimer in the final shot reveals that two days later, a Soviet ‘weather satellite’ destroyed a large UFO orbiting Earth with a laser cannon and several nuclear missiles.

Maximum Overdrive is one of the movies I watched a lot as a kid and I still enjoy it now. The idea of machines, soda machines, cars, etc, coming to life and attacking us is a great concept that really hadn’t been explored that much in-depth. I like how everything seems to come to life and each machine can do damage in its own way.

It’s pretty easy to look at the film from a serious side and dismiss the idea that all these machines need power to work. All people would have to do is wait things out and shut the power off to solve the problem. However, it’s much more fun to just think of what could go wrong and what machines can do, rather than go at it all super serious. Besides, it’s Stephen King, you have to give up some seriousness.

Stephen King did a good job at directing, but I will have to criticize the pace of the film at times. There’s a middle portion where the film just grinds to a halt. They spend, I think, too much time letting Bill and Brett get close, with Bill going over his past as an inmate. Honestly, we didn’t need to know the intimate details. Just say that he was a bad guy once but that’s not who he is now. He’ll do the right thing now, that’s the idea, and we could have gotten that without slowing the movie down to a crawl.

Another issue I have with the film is the music, but this is a good and bad thing. Stephen King was able to get AC/DC to cover the soundtrack and that’s cool. I have no problem with those guys. Other times, however, when they’re going for a jump scare they play this loud siren like music. You’ll hear this a few times and it will grate on your nerves. I honestly thought my ears were gonna bleed by the time the movie was done.

Acting: Emilio Estevez did a fine job as Bill, our hero. Most people don’t imagine Emilio as a leading man, but I think he did a good job here and I enjoyed watching him blow trucks up.

Pat Hingle was great as Bubba Hendershot, the asshole boss. Pat Hingle’s a great character actor with a long list of great films under his belt.

Laura Harrington was great as Brett Graham, the witty hitchhiker. She was hot and not to be messed with.

Yeardley Smith, who you might recognize as the voice of Lisa Simpson, was annoying as hell screaming throughout the film.

Gore Factor: So much goodness here. You’ve got a soda machine firing out sodas killing a guy, plenty of car crashes, gun shots, a steamroller rolling a kid over, an electric knife doing some dirty work and more. Ewwww!

Nudity Factor: We get a little side boob from Laura Harrington… I’ll take it.

Overall: Maximum Overdrive is a great way to kill a Saturday afternoon. It’s got some jump scares but really this is all pretty corny stuff with the machines coming alive. Still, it’s an enjoyable mess and you can’t go wrong with blowing up trucks.