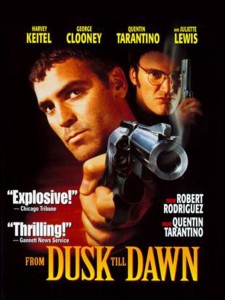 Plot: Two criminals and their hostages unknowingly seek temporary refuge in an establishment populated by vampires with chaotic results.

Review: Everybody be cool… you… be cool.

The Gecko brothers, Seth (George Clooney) and Richie (Quentin Tarantino) are on the run from the law after having killed a number of police officers. They take hostage a former pastor, Jacob (Keitel) and his two kids, Scott and Kate (Juliette Lewis), after realizing they can hide in the family’s RV to get across the border. After successfully reaching Mexico, they arrive at the “Titty Twister,” a strip club/brothel in the middle of a desolate part of Mexico, to meet Carlos, their contact, at dawn. The Gecko brothers rough up the door man before getting in and sit down to drink. Seth gets to know Jacob and his kids finding out Jacob is a pastor who has lost his wife and with her, his faith.

Richie takes special notice of the club’s star performer, Santánico Pandemónium (Salma Hayek), during an extended solo performance. Afterwards, Chet Pussy and some others approach the group, looking to settle the score with the Geckos. In a short confrontation, Richie is stabbed in his already wounded hand and seeing his blood, Santánico attacks him. She undergoes a transformation into a horrific vampire and bleeds him to death before she meets her own end. Chaos subsequently ensues as the employees, the strippers and the house band, are all revealed to be vampires. One of the dancers locks the door and the vampires start feeding on all bar patrons.

Only Seth, Jacob, Kate, Scott, a biker named Sex Machine (Tom Savini) and a Vietnam veteran trucker named Frost (Fred Williamson) survive the attack and quickly establish an alliance in order to survive through the night. Seth convinces the group that Jacob is their best weapon, if he rediscovers his faith. They also figure out that forming a cross with two objects helps fend off the vampires. The group spends the next few hours fending off the vampires with each person in the group getting bitten and coming back. The night comes to a close with Seth and Kate being the last two alive and they break windows to get out of the bar while killing more vampires before Carlos and his men show up. Theyhelp the two get out as the bar explodes.

Angry over the deaths of Richie, Jacob and Scott, Seth demands that Carlos lower his 30% take for his stay in El Rey, He tells them to wait in the bar, to which Carlos reluctantly agrees. Kate offers to accompany Seth, but he declines and gives her some cash before they go their separate ways. After Kate drives the RV away, the camera pans back to reveal that the “Titty Twister” bar is the top of an Aztec temple partially sunk into a valley wall. This is most likely the source and true home of the vampire monsters who’ve been spreading their curse for centuries, with many abandoned motorbikes and trucks from their past victims littering its grounds.

I’ve never ever been keen on vampire films. Quite frankly, I find them to be incredibly boring, but From Dusk Till Dawn changes the typical formula up. In all honesty, this is two different films meshed together. The first half of the film is a road movie with two violent criminals, who are clearly the bad guys. The second half of the film is a horror film, where the violent criminals switch and become the good guys.

The film does such a great job at making the switch that you pretty much don’t notice it. By the end of the film, when everyone is dead, you’re happy to see Seth drive off into the sunset, even though he’s killed a number of innocent people before reaching that bar. It’s the double switch, which wrestling fans know all too well. Unlike other films which telegraph the switch, or force it on the audience, here it’s organic. You can’t see it happening, it just happens and you’re suddenly on their side.

The film moves along at a great pace, not going too fast or two slow. I love how no matter what, Seth and Richie stick together. It’s about family and even though they’re brutal killers, they’re still family. I also like Keitel’s character Jacob, the preacher who’s lost his faith. He’s dealing with his own issues and trying to keep his family together and like the Gecko brothers, they stick together until the end.

The setting for the second half of the film, the Titty Twister, is a character itself. It’s loud, rowdy and looks like a great place to hang out, until the vampires start in. They swarm and it’s a treat to watch them take out the good guys one by one. When the good guys fight back, the action heats up and there’s so much green blood flying. It’s exactly what you want to see: blood, guts and cool one liners.

Another reason I really enjoy the film is the way it treats the problem at hand, the vampires. The group has to reach the conclusion that vampires are in fact real and that’s all there is to it. The group then tries to remember how to kill them and it makes for a fun scene with all of them bringing their combined movie knowledge of how to fight vampires.

Acting: George Clooney does a stand up job as Seth Gecko. Clooney has always been a great actor and it’s fun to see him play the cool badass throughout the film.

Quentin Tarantino is equally as great as Richie Gecko, the sick twisted rapist. He makes you uncomfortable watching the film, which means he did his job.

Harvey Keitel is awesome as Jacob. I’ve always felt that Keitel doesn’t get enough credit for his work. I believed his character’s struggle and redemption.

Juliette Lewis was fine as Kate Fuller. She was cute when she needed to be and toughened up by the end of the film.

Gore Factor: All the blood is green in this one, but we get plenty of it. Sliced up heads, hands, fingers, arms, legs, a heart gets stabbed, so many stabbings… there’s something for everyone here.

Nudity Factor: We get some random boobs and Selma Hayek shows off her fine self.

Overall: From Dusk Till Dawn is a great little film that takes action and horror and mixes it with great results. Clooney, Keitel and Tarantino bring their “A” game and they’ve got a tremendous supporting cast. Avoid the straight to video sequels and check this one out if you haven’t yet.