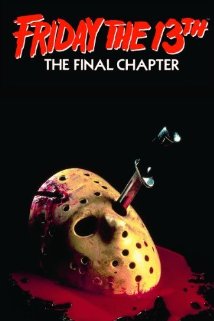 Plot: After being mortally wounded and taken to the morgue, murderer Jason Voorhees spontaneously revives and embarks on a killing spree as he makes his way back to his home at Camp Crystal Lake.

Review: This is the one you’ve been screaming for.

If anyone really thought The Final Chapter was going to be the last Friday the 13th film, they were only fooling themselves. The fourth installment in the franchise looks to kill Jason once and for all, and does away with the 3D gimmick of the previous entry.

The film starts off with the aftermath of Friday the 13th Part 3D, showing us how Jason got carted off to the hospital. The big guy doesn’t stay down long though, as he’s back up and killing people right away. Meanwhile, the Jarvis family, consisting of Pam (mom), Trish (teenage daughter), and Tommy (young boy) has moved into a cabin on Crystal lake, with a group of teens moving in across the street. Jason works his way back to Crystal Lake and one by one, kills each doped-up, sex-crazed teen before finally meeting his match against Trish and Tommy, the wonder twins.

Friday the 13th: The Final Chapter went back to the seriousness of the first film in the series. Jason is even more violent here, the kills are more gory and just more sadistic this time around. Jason also grunts a few times, as he’s killing and being killed, slightly taking him away from being just a killing machine. It’s this seriousness that I enjoy about the film, but there are plenty of laughs to be had with a set of actual Double Mint twins, Jimbo being a dead fuck, and Ted using his “computer” to try to help his friend get laid.

The teenagers here feel a bit more real here, but are still cannon fodder. The real characters to watch are Tommy and Trish, the brother/sister team. Tommy makes masks and dabbles in special effects, and Trish is a down to earth sweet girl who ends up being Jason’s toughest opponent. Another character, Rob, is the brother of one of the girls from Friday the 13th Part 2. I like this little tidbit for the character, that he’s out there to find Jason for killing his sister.

As real as the teenagers feel, there is still very little characterization to be found here. I bring this up because slashers like Halloween and Hellraiser were able to get their characters, be it heroes or victims, across in their films. Had the Friday the 13th franchise just slowed down with the kill spots and upped the character development I would have enjoyed it even more.

The film takes place directly after Part 3, which I think is great as it puts parts two, three, and four together as long one story happening over a few days. It also helps the idea of these people coming out to Crystal Lake, as everything is happening so fast no one is able to hear about it before they head out and end up getting killed. You have to think back in the day there was no Twitter or Facebook to spread the news quickly, so no one had an idea as to what was going on.

Joe Zito did a great job of bringing the creepiness back to the franchise after Part 3D gave it up for its effect. I love Friday the 13th Part 3D, but I also love The Final Chapter because they did their best to make Jason a scary figure and the woods a more dangerous place to be. The music here is solid, with the iconic music returning and Tom Savini coming back to help in the make up department.

Acting: Kimberly Beck did an awesome job as Trish. She’s cute, smart and tough when she needs to be. She also gives Jason a run for his money.

Erich Anderson does a fine job as Rob, who meets his end in a hilarious way. Director Joe Zito meant for Rob’s demise to be horrible and sad, but the way it’s played is just too comical to be scary.

Corey Feldman did a great job as Tommy. I’ve always been a Corey fan and for him being as young as he was, it’s impressive that he was able to be a professional and do a great job here.

Ted White is a great Jason, even though he shit all over the role for years after he played the part. He stayed away from the cast and crew on the set, making sure when people saw him coming they would be genuinely afraid.

Crispin Glover is one of those eccentric actors that is all over the place in his performance, but does a great job when he’s on the screen. Everyone remembers him as George McFly, I remember him as Deadfuck Jimbo.

Gore Factor: Plenty to see here, with a gutting, a knife through the neck, smashed head, speak to the back, spear to the nuts, machete through the stomach, axe in the chest….and so much more. Jason’s demise is also a gross site to be seen.

Nudity Factor: The Twins show off their goods, and so does the cute Judie Aronson, who you might remember from Weird Science.

Overall: Friday the 13th: The Final Chapter has a lot going for itself. The kills are nice and gory, there’s plenty of nudity, and Jason meets his end thanks to a young Tommy Jarvis, who would return in the next two films. Another great score and slick work by Joe Zito means you’ll have a great time watching this one.