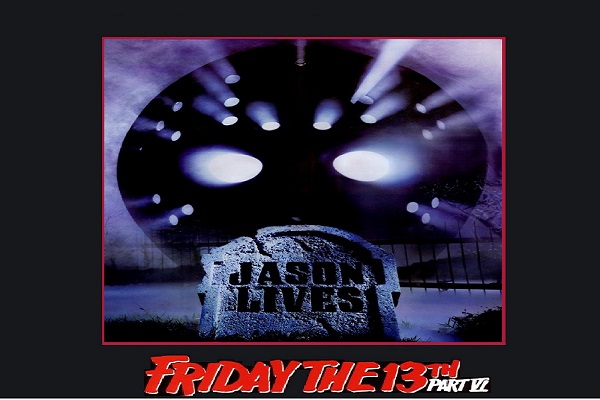 Plot: Tommy Jarvis goes to the graveyard to get rid of Jason Voorhees’ body, but he accidentally brings him back to life. Jason wants revenge and Tommy must defeat him once and for all!

Review: Some folks have a strange idea of entertainment.

Well you knew Jason wouldn’t stay down long after being killed and it was legit unlike what most people think. Jason took A New Beginning off to recharge his batteries and he comes back a new man in Friday the 13th Part VI: Jason Lives.

The film starts off with Tommy Jarvis, the poor bastard we’ve been following since The Final Chapter, who’s now an adult (a young one) and fresh out of the nuthouse. Tommy and his buddy Hawes (Horshack from Welcome Back, Kotter) travel out to find Jason’s grave, with Tommy intending to see Jason one last time and cremate him (apparently this didn’t happen as the Mayor from A New Beginning claimed). Tommy and Hawes dig Jason up and wouldn’t you know it, Tommy flips out and starts stabbing Jason is a hard metal rod he was able to rip off the fence surrounding the cemetery. A storm kicks up and lightening hits the pole, not once, but twice, and Jason is back in business.

It doesn’t take Jason long to get started either as he takes out Hawes while Tommy escapes. We get our James Bond style opening and Jason is back slicing his way to Crystal Lake, which has been renamed Forest Green. Tommy goes to see Sheriff Garris who arrests him for reasons unknown and locks him up, refusing to believe Jason is back (figures). Megan Garris, the Sheriffs daughter, has the hots for Tommy and believes him. Jason, meanwhile, starts killing off counselors who actually have kids show up at the campsite this time around! Yeah, I couldn’t believe it either but there’s actually kids at the camp in this one.

Megan helps Tommy bust out of jail and they make plans to take down Jason. Sherriff Garris and his men finally go to Camp Crystal Lake (Forest Green, whatever) after discovering dead bodies in a path towards the camp. Of course, the deputies are no match for Jason who is pretty much indestructible now and showing no signs of pain or fatigue. Jason dispatches them one by one until Megan and Tommy show up. Tommy lures Jason out to the middle of the lake and chains him up to a large rock to drown him. No, I’m not shitting you, that’s their solution, put Jason at the bottom of a lake with a large rock around his neck. Tommy, Megan and the children survive, and CREDITS.

There’s a cut off with the Friday the 13th films that fans have. Personally, I can watch all of them, but I’m more of a fan of the first four movies and I’ll even lump the fifth in there. The first movies have Jason as being a man. A man with a high tolerance of pain and a lot of luck, but still a man. He runs, he winces in pain, he even yells in pain as well. Starting with Jason Lives, Jason is a zombie and even resurrected like he’s Frankenstein in this one. For the rest of the series, Jason walks (fast) and feels no pain at all. Some fans like this and enjoy these films more then the earlier ones but that’s not me.

Still, there’s plenty of good here. There’s all sorts of killing and some more inventive ones as well. The Mastercard gag is funny even today and I like how Jason killed Sheriff Garris (ouch!). The pacing is pretty good too as there’s a lot going on but the film never feels bogged down. It moves along at a medium pace so nothing is rushed or drawn out. I like that there’s actually kids at the camp as the past films didn’t feature this and it adds a new sense of danger to what’s happening.

I also like that Tommy Jarvis returns here since it’s an okay end to his characters arc. That being said, I think they could have handled it much better then they did. Tommy was locked up most of this movie and unable to really do anything. He’s supposed to be the guy that can stop Jason and he was pretty much useless over the course of the film. He should have been given more to do such as chasing Jason, trying to stop him or trying to protect the people around him. Instead he’s locked up and ends up pacing around a cage for the entire movie. He does get to stop Jason, so that’s a plus, but it was almost too late.

I also don’t care for the Zombie Jason, but I can understand why people would like him. At this point, the series wasn’t really scary anymore and was more about seeing how Jason was going to kill this person and that person. The music is pretty good as well though not as creepy as the original, and it’s a little campy with Alice Cooper singing the films ending song.

Acting: Thom Matthews did a fine job as Tommy Jarvis. It’s a shame he had so little to do story wise.

David Kagen was perfect as Sheriff Garris. He’s an asshole that won’t listen to reason, just wanting people to forget Jason Voorhees and what happens years previous. Fun fact: my seventh and eight grade teacher looked exactly like Sheriff Garris, just without the mustache. Although I’m sure she could have grown one if she wanted to.

Jennifer Cooke was great as Megan Garris. She’s hot and tough, without being annoying. She’s also a great driver.

CJ Graham did a good job as Jason. He’s not huge and I like that. He also walks with a purpose, but there’s no personal touch like Kane Hodder.

Gore Factor: Alright let’s run it down: a ripped out heart, impaling, ripped off arm, triple decapitation, broken bottle in the throat, double impalement, crushed face, knife in the head, ripped off head, dart in the head, crushed head, a guy broken in half, and a split open throat. Plenty of good kills here.

Nudity Factor: None, although we do get a little side boob before Jason kills Cort.

Overall: Jason Lives started the series down the road of Zombie Jason and left any seriousness behind. As we move forward, it’s only gonna get more campy, but I can still enjoy the movies as I like seeing Jason doing his thing and seeing people trying to stop him. It’s not the best Friday the 13th film, but it’s not the worst either.