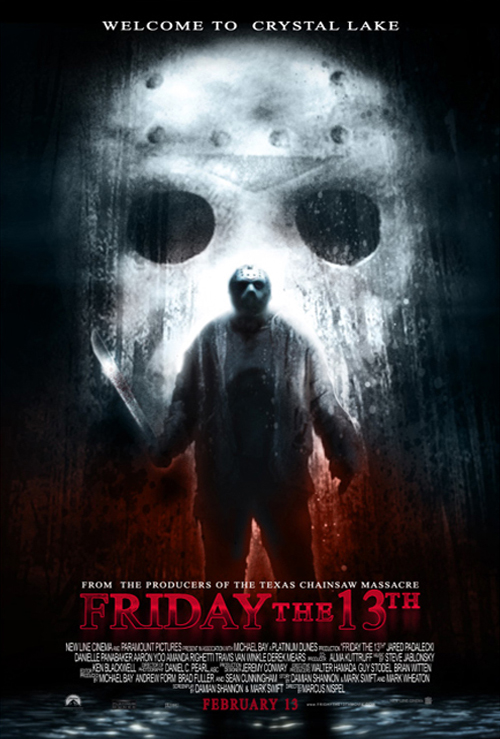 Plot: A group of young adults discover a boarded up Camp Crystal Lake, where they soon encounter Jason Voorhees and his deadly intentions.

Review: On June 13, 1980, a young Jason Voorhees witnesses his mother being beheaded by a camp counselor, who was trying to escape Mrs. Voorhees’ murder spree around Camp Crystal Lake. Approximately 30 years later, a group of vacationing friends — Wade, Richie, Mike, Whitney and Amanda — arrive at Crystal Lake on a camping trip to find some marijuana that was planted in the woods. As Mike and Whitney explore the abandoned Crystal Lake camp, an adult Jason, with a cloth wrapped around his face to conceal it, begins to kill the rest of the group one by one. Jason also kills Mike, but decides to spare Whitney and abducts her because she resembles his mother at a young age.

Six weeks later, Trent, along with his girlfriend and their friends arrive at Trent’s summer cabin on the shore of Crystal Lake. The group is unaware of the events that occurred a few weeks prior. Clay Miller arrives in town to search Crystal Lake for Whitney, his sister. During a confrontation, a farmhand rips Jason’s cloth mask so he replaces it with an early model goalie mask. Clay eventually makes his way to Trent’s cabin, where Jenna agrees to help him look for his sister on the other side of the lake. Clay and Jenna reach the old Crystal Lake campgrounds, where they witness Jason hauling a dead body into one of the abandoned camp houses.

The pair run back to warn the others about Jason, who soon arrives and cuts the power to the cabin. After killing three more kids, Jason chases Clay and Jenna back to the campgrounds, where Clay discovers Jason’s lair and finds his sister chained to the wall still alive. Clay frees Whitney, and all three attempt to escape as Jason arrives. The trio find an exit, but Jenna is killed before she can get out. Jason comes after Clay and Whitney, but Whitney, by pretending to be Mrs. Voorhees, uses Jason’s love and memory of his mother to distract him long enough to stab him in the chest with his own machete. Afterward, Clay dumps Jason’s lifeless body into the lake. Before he and Whitney can leave, Jason bursts through the wooden dock and grabs Whitney.

This was the second Friday the 13th film I caught in the theater, and I’m glad I did because there’s nothing like seeing old Jason on the big screen. Let’s talk about what the film does right. Straight away, Jason is back and very angry, which is perfect! Watching Jason tear through these teens like the old days was great fun, and at times he was downright scary to watch. I also love how the writers made sure to call back Friday the 13th Part 2 with Jason wearing a sack on his head before the callback to Friday the 13th Part 3D where Jason got his hockey mask. This was awesome for long time fans of the franchise. There’s a certain amount of respect the writers and director gave to the history of the character that I can really appreciate.

I also like that they built the opening up, making it basically it’s own little film to introduce Mrs. Voorhees and then Jason. By the time the title screen hits, it’s been almost half an hour! This was great, as it gave people time to catch up on the characters while not rushing anything. The next hour and change would fly by, and I was never bored or hoping the movie would just end. The characters are your usual assortment, nothing new here, with the douche bag jerk, the girl who’s stupid, the stoner, the clown, and then the serious girl and guy leads. Watching them get theirs was more fun then I had in a long time with the franchise.

The kills weren’t terribly creative but at this point, it’s pretty hard because we’ve seen just about everything there is to see. What I appreciate is they didn’t go for the torture porn route, like Hostel or Saw. Here, we get gore, good gore as well, along with plenty of story to keep things moving around. I liked the idea that Jason just wanted his mom back, and they did away with any question of weather Jason survived the drowning and watched his mother die. Here, we know he saw it all and that’s good enough for him to start killing.

While I do gush about a lot of the film, it’s not without it’s problems. First off, if Jason’s been going around kidnapping and killing people for so many years, so much so that people who live in the area know of the legend, why does Trent, the douchebag, have a cabin out at the lake? How did they summer or vacation there with Jason running around? What the hell?

Another problem is with Clay and his sister, I think it’s great that she reminds Jason of his mom, but he kept her chained up for six weeks right? So how did she go to the bathroom? What about that problem that springs up once a month? And food, did Jason feed her? Just to add onto this, since we’re talking about Jason keeping someone chained up underground in his lair, how did he have the know how to dig all these tunnels and underground caverns without them collapsing on themselves? I don’t get how he was able to do all of this on his own.

One last issue I have, and this is a small one, is the reason for the kids in the beginning to be out at Camp Crystal Lake. One of them knows the legend of Jason, even telling his friends (and the audience) about it. Okay, so you don’t believe in that stuff, that’s fine I can overlook that. The reason you’re out there though is you’re searching for a large field of weed. That’s right, the teens GPS’ed a weed crop, and were trying to find it. I don’t know how you GPS a weed field, in a small town where people know about Jason yet the local police do nothing of this weed field. Even with that stupid reason for sending the kids out there, the reason is recycled from the Texas Chainsaw Massacre remake, where the kids were smuggling weed across the border, and got attacked. The producers of these remakes were the same, and reusing the weed plot point to me, is weak and quite frankly stupid.

Still, that machete through the dock kill was awesome, am I right?

Acting: I’m not a fan of Supernatural, but I thought Jared Padalecki did a fine job as Clay Miller.

Danielle Panabaker was our lead girl, and it’s a shame she didn’t make it to the end, as I liked her more then Whitney.

Amanda Righetti really didn’t have much to do character wise as Whitney, maybe that’s for the best.

Derek Mears did a fine job as Jason, again all it really takes is being built and able to move around swiftly.

Gore Factor: Let’s go: a screwdriver in the neck, girl burned alive, axe in the back, arrow in the head, impaling by machete, another impaling, machete in the skull, a slit throat, a poker through the skull out the eye, and plenty more!

Nudity Factor: The guys get three different sets of boobs, the girls get Jared Padalecki sweating up the screen.

Overall: Friday the 13th is not the best Friday the 13th, and even though it’s got some problems, this is a good remake of the original film. There’s plenty to enjoy for fans of the series, the mix of Jason using a sack for a mask and then getting the hockey mask, plenty of good kills (machete through the dock, the axe throw) and T&A really bring the Friday the 13th experience together. There are worse remakes out there then this for sure, so check it.

Writers Afterword: A year ago today I sat down and wrote the Friday the 13th review, and my intentions were to just review the Friday the 13th films, as they are my favorite horror films. What I ended up doing was writing about so much more then that, and I did my best to cover the most popular films, while also covering ones that maybe you didn’t see. I know that I didn’t get to cover all of the sequels to the popular franchises, like Halloween or A Nightmare on Elm Street. Also, if there’s a film you wanted to see get reviewed and I didn’t get to it, well I’m sorry.

Fear not, I’m not going away. I’ll be back in a few weeks with a whole new set of reviews, for a whole different medium and genre. I want to thank Justin, Scott, and Brad for backing me up and allowing me to write what I wanted to write, for believing in me, and trusting me to help launch Placetobenation.com. They gave me a canvas to practice my art week after week, and I’m incredibly grateful and thankful for it.

This is not the end of the House of Horror, think of it as a break. We may return to it down the road after a few months or maybe even after a year has passed. Sometimes we all need to stretch our legs and try something different. I also want to thank everyone that’s ever read my column, all six of you are awesome.