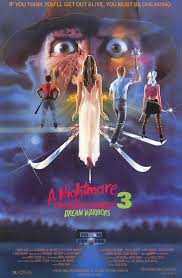 Plot: Survivors of undead serial killer Freddy Krueger – who stalks his victims in their dreams – learn to take control of their own dreams in order to fight back.

Review: Welcome to prime ti…..I can’t even finish the line cause it’s stupid.

Freddy Kruger is back, without any explanation, to torment more kids on Elm Street. It’s been about six years since the events of the first Nightmare on Elm Street, and kids are still dropping dead in their sleep. The adults believe these are all suicides thanks to Freddy’s handy work.

The film takes place in and around a hospital/psych ward, following our lead of the film Kristen who’s fought with, and survived, a Freddy attack. Kristen ends up in the hospital thanks to no one believing here, pretty much opening up the buffet for Freddy to keep killing. Nancy Campbell, the lead from the first film, is back and trying to help these kids stay alive. Nancy has finished up college and returned home determined to stop Freddy once and for all.

The kids in the hospital include: Philip, a talented puppet maker; Kincaid, a tough guy with attitude problems; Taryn, a former drug addict; Joey, a boy so traumatized that he refuses to speak; Will, bound to a wheelchair after a failed suicide attempt; and Jennifer, an aspiring actress. Freddy of course targets these kids because they’re easy cannon fodder. However this time, the kids are able to turn the tables on Freddy and become the “Dream Warriors”, hence the title.

The kids are able to overcome their problems in their dreams, like Will becoming a Wizard, leaving his chair and shooting electricity out of his hands at Freddy. Even with these powers, one by one Freddy kills them all. The nightmare eventually comes to a head with Nancy, Kristen and Kincaid trying to survive while help comes from outside the dream world.

That help is from Dr. Gordon, who works at the hospital, and believes Freddy is the one killing these kids. After speaking with Freddy’s mother, he learns the only way to stop Freddy is by destroying his bones. Dr. Gordon, with help from Nancy’s father, digs up Freddy’s bones, has a skeleton vs. man fight (I’m not joking) and sprinkles holy water on the bones to destroy them. Unfortunately, Nancy eats it by the end of the film but so does Freddy, ending his reign of terror yet again.

The third installment of the NOES series is a popular one amongst fans, and I can remember really enjoying it as a kid. Today, it’s still somewhat entertaining. The teens all suffer from problems that are still relevant today, so it’s easy to connect with any of the seven of them. I also like the setting, this time it’s not just random kids handling stuff on their own. Instead there is clearly a problem with kids dropping like flies and even though the adults don’t believe what’s really going on, at least no one is acting like something is not wrong.

When it comes to the Nightmare on Elm Street series, I’ve come to find that you have to let that line you draw go a bit further than other films. I can ignore the fact that the Freddy snake looks like a giant Freddy penis, and that Freddy popping his head out of the TV during a Dick Cavett show is a bit ridiculous, but this film is really the one where Freddy started his one-liners, and they are groan-inducing. That’s where I draw the line with Freddy, the one-liners. The first two films, Freddy was menacing, even when he talked. This film, Freddy’s a joke, more worried about looking cool to the audience with a quick one liner then being scary.

Freddy is a character that can only kill you when you’re asleep, when you’re at your most vulnerable, yet here he is cutting jokes instead of scaring people. I think it’s dumb, just dumb and the decision to make him killing comedian would turn the entire franchise a different direction that it wouldn’t try to shake for about ten years.

The effects are good for the most part. When Freddy is killing, besides the Freddy Penis, everything looked pretty good. There’s also a stop motion puppet sequence that still looks awesome today. The only complaint about the effects I have is Dr. Gordon fighting Freddy’s skeleton. It looks like shit, pure shit, and I wish they’d gone about it a different way.

The directing by Chuck Russell is pretty good here, the film doesn’t seem to stall or sag at any time. I never felt bored while watching, at least not with the pace. The story itself, well that’s a different. I like the kids here, I like that they overcome their problems, I just felt like it took too long to get to that point.

I liked the idea of the kids turning into these “Dream Warriors” with powers and abilities to match up against Freddy. Finally, he’d have someone who could compete with him in his world. That being said, when they do overcome their problems and become the “Dream Warriors”, they tend to sputter out pretty quickly. When you put those words in the title of the film, you expect them to actually be able to challenge Freddy, but it’s merely a reason to give them a change of wardrobe and some special effects.

Acting: Heather Langenkamp knows how to play Nancy Thompson. She’s a shade older, even cuter then before and still tough.

Patricia Arquette kicked off her career here, and I think she did a great job as Kristen. Fighting Freddy is no easy task.

Robert Englund is Freddy Kruger, no doubt about it.

Gore Factor: There’s some decent red stuff here. The worst is watching Freddy control one of the kids like a puppet, using his veins as ropes (ewwww), slashes and gashes in other places and a head through the TV.

Nudity Factor: We get boobage here, and it’s so good that I remember it twenty-five years later.