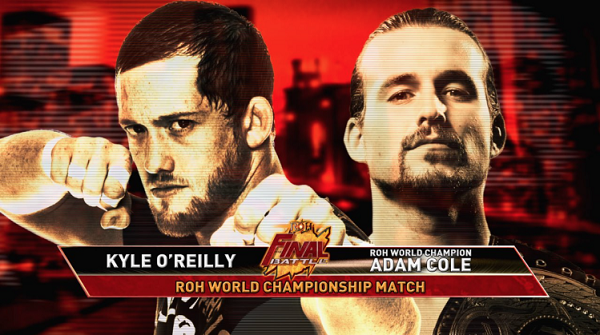 It’s Ring of Honor’s biggest show of the year, Final Battle 2016, and we’ve got you covered with a quick predictions piece going into tonight. In collaboration with Voices of Wrestling and The Honor Roll: ROH’s 50 Greatest Wrestlers Ever project, I joined in on their roundtable previewing the show. Here’s the complete roundtable for your reading pleasure.

If you’d prefer an abridged audio version of this preview, be sure to check out the last Clotheslines & Headlines podcast, where Steve and I talked through the card plus gave some overall thoughts for ROH in 2016.

On to some hot takes and predictions as we run down the card:

The Cabinet, seemingly at the end of their run, have been regularly on TV this year so it makes sense that they get a slot on the biggest ROH card of the year. MCMG recruiting an alliance of sorts is pretty fresh, especially if it means a refocused push for Dijak (I still feel there was a lot more mileage with Nana though). It’s really odd to me after the year they’ve had that the Addiction aren’t on the card. It’s also a little surprising they’d do a second trios match in front of the 6-man finals later in the night. Putting those two points together, I’ll go with an audible being called and this becomes a bigger match with Daniels and Kaz (plus a partner – perhaps a Cheeseburger for the pop – as the Addiction have slowly been turning face) joining in. Prediction: MCMG and Dijak

Colt has had a pretty good run of it in Ring of Honor this year, with this being his 20th match for the company in 2016. It may seem forced to go right into a grudge match after two weeks of TV build, but there’s enough story (weaving through Glory by Honor also with their rushed tag title shot) here for me to buy in. And Castle is, and will continue to be, mega over – cementing Colt as an easy heel here for the NYC crowd. Unless there’s a plan to extend this to Castle/Silas feud-heights in terms of longevity, Castle gets a nice win here to avenge his boys. Prediction: Dalton Castle

As he now faces off with the legend Jushin Liger, it’s been a busy year for Silas Young, uneven at times as it was. He impressed against Shibata and his character work was great in feuds with Castle and ACH. Recently elevated to a big TV main event against Lethal and his title shot against Cole (which I honestly felt bad for him with how bad the crowd was in Florida to witness), I think we see Silas end the year on a positive note going into 2017. Prediction: Silas Young

While the bloom is off the rose with Cody on the independents, I’d imagine a solid group of the ROH base has not seen him since his WWE days. And while he wasn’t needed (though he was announced) to move tickets, I can’t dismiss the potential that he sways in some last minute buys. I think what hurt here a bit was Lethal’s rematch in the UK, and having to hold off announcing this match until very recently. So with no story, outside of this being the first in Cody’s 10-match run in ROH, we get an exhibition with the guy who I would name ROH’s MVP for 2016, Jay Lethal. Lethal’s slow manifestation into a babyface was excellently done after a great first half of the year, and now post-title, he’s got a win over Naito to show he’s still the top tier in ROH. This one is the hardest to project. Do you put over the new part-timer who you’re using to advertise return dates for ROH shows in early 2017 or your 2016 MVP who will be gunning for the title shot at the 15th anniversary show? I’m going to say we get Lethal winning here, with a lot of respect thrown Cody’s way after. Prediction: Jay Lethal

I expect we’ll see the 6-man titles swapped much more frequently than usual in ROH (this is not a controversial hot take mind you), and while I think Jay White and Lio Rush will eventually hold the belts in some capacity, this tournament is to re-affirm Matt Taven and crew. There is plenty of excitement on the babyface side here, but in the end The Kingdom goes into the new year with the newly minted belts. Prediction: The Kingdom

With the Bucks two-year contract offer from ROH making news this week, this is a nice little hedge politically if there is a contract impasse. And the Briscoes have been set up with a solid chase and have ROH history with them if there is a change. That said, while I typically don’t believe the Bucks need any kind of title to be a top act in ROH, I do think it’s a bit premature in their run to have them switch things back to the Briscoes. This is a chance for a nice feather in the Bucks’ caps going into, hopefully, a two year stint in Ring of Honor. This could potentially steal the show, even with that four-way earlier in the evening. Prediction: The Young Bucks

If there were two guys that could pull off quick title changes around the TV title it was Ospreay and Scurll. I’m glad the predictable kneejerk reaction of “you’re devaluing the title!” is shouted down with praise for the unpredictability of it all. And there’s plenty of time for high-profile singles matches between these guys in 2017. This should be fantastic, with Fish (another guy in the running for 2016 MVP) being the glue that keeps it all together. This isn’t a knock by any means on Scurll, but Dragon Lee and Will Ospreay don’t need a ROH belt. Let Marty carry it through the first half of 2017. Prediction: Marty Scurll

Who says long-term storytelling is dead? The history of Cole and O’Reilly has plenty of callbacks and easy tales to tell, but I really like the way they’ve booked these two to weave in and out of each other’s paths for the last 15 months. Cole ditches the Kingdom, takes the fall in the 14th Anniversary main event, and ultimately loses to O’Reilly, ending their feud in April. *But* the Bullet Club makeover was a refresher and his character work made it easy to move on from those early losses. With a new group of buddies in tow, they take out O’Reilly post Best in the World, crippling his chances for the title against Lethal. That shoulder injury is still being used as a storytelling device in his matches. Cole wins the belt, but right away these guys are hot again at each other, with different stakes than earlier this year. Really well done. O’Reilly has asked to make the match No DQ and I’m conflicted on this. Even if there was suspected interference before, it’s really called out with the No DQ stip. And what happens is people sitting on their hands watching the entrance ramp versus being fully engaged on the in-ring action. On the other hand, Kyle defeated Cole in a No DQ match earlier this year and he wants revenge for the summer injury. The purported culmination of Kyle O’Reilly, in what is the biggest show of the year, is a moment we don’t see as much in pro-wrestling nowadays. Last year we fretted over how Jay Lethal could defeat a NJPW bullet-proof AJ Styles. Scores are settled at Final Battle, but this is potentially a first-time champ being crowned to close the show. It’s a big deal and a match that sells the show. Prediction: Kyle O’Reilly