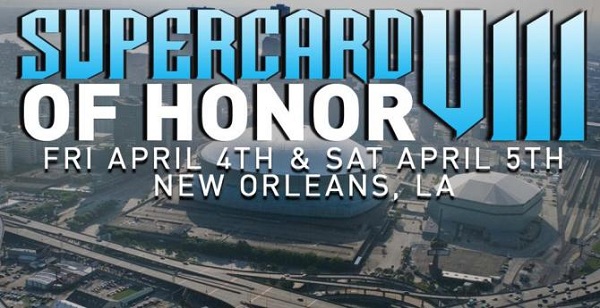 For over a decade Ring Of Honor has been participating in the events leading to WrestleMania and  on Friday evening the promotion will debut in the state of Louisiana at the John A Alario event center in the Bayou Segnette Sports Complex. Let’s have a look at the card.

Ever since “Death Before Dishonor XI” in September these two men have been on each other’s radar.  After handing over the championship to Adam Cole and being shown the dishonor by Cole after being superkicked in the back of his head. Jay Briscoe has been determined to get the championship back that he never lost, he got so focused on wanting his title back at “Glory By Honor  XII” he returned to the promotion with a custom-made ROH Championship and claiming that the belt he held was the “Real” ROH World Championship. These two met in a triple threat match (with Michael Elgin) at Final Battle with Cole retaining his championship. Then in January these two met again in a triple threat match but this time with tag team partners where the team of Elgin and Hero won but it was Chris Hero who earned an opportunity at the ROH Championship.  In the weeks leading up to State Of Art (which has just been released on DVD at the ROH Store) Jay challenged the ROH Champion to a match but with the custom ROH Championship on the line which Cole accepted, but he wasn’t successful in capturing the “Real” ROH title.  On the 15th March edition of ROH on Sinclair Broadcasting, it was announced by the ROH matchmaker Nigel McGuiness that both the ROH Championship and the “Real” ROH Championship would be hung above the ring and the only way to capture the belts is to climb a ladder. So Ladder War V was announced, and in the last stop before this weekend’s show Jay Briscoe pinned Cole in a tag team match at High Flyin’.

This is the fifth Ladder War in the promotion’s history, but only the fourth time that a championship will be on the line and second time that the ROH Championship will be raised above the ring. Jay has been in two already, the first one with his brother Mark taking on El Generico and Kevin Steen for the ROH Tag Team Championship (Man Up – 15th September 2007 in Chicago, Illinois) and then with Mark taking on The All Night Express for an opportunity at the ROH Tag Team Championship (Death Before Dishonor IX).

Two years and six months ago, these two met for the first time at ROH Death Before Dishonor IX in the a tag match where Jay teamed with the Notorious 187 taking on Ciampa and Rhino with Ciampa’s team winning after pinning Homicide. Their first singles encounter came at ROH Underground (21/01/12) in Norfolk, Virginia where Ciampa earned an opportunity at Lethal after the distraction of Mia Yim and Ciampa hitting project Ciampa. They met in the final of the March Mayhem Tournament where Ciampa once again pinned the ROH Television Champion to eliminate Lethal. The opportunity for the Television title came at the promotion’s Tenth Anniversary show on 04th March 2012 where they went to the fifteen time limit and in frustration took Lethal’s belt. He returned the belt to the champion at Showdown in the Sun Night Two before Jay’s match against Roderick Strong, with Strong winning the title from Lethal.  Ciampa and Lethal came face to face in Toronto, Ontario, Canada at Boarder Wars 2012 on 12th May in which Lethal ended the undefeated streak of Ciampa. They met again for the Television Championship at Best In The World 2012 but in a triple threat match which saw Strong eliminate both Lethal and Ciampa. The next time these two would meet would be in a two out of three falls match at Boiling Point II in Providence, Rhode Island (11th August)  but Lethal’s win two falls to one was over shadowed by the unfortunate knee injury to Ciampa. Fast forward to Wrestling’s Finest on 25th January 2014 these two would meet in a three-way dance with Ciampa’s Television Championship on the line with former television champion Matt Taven in the match in the match and then they met again at State Of The Art where this time these two were involved in a match with an opportunity at the ROH Championship on the line but neither man came away with the opportunity. At the television tapings the night after the 12th Anniversary (22/02/14) show and after two years and six months since their last single match these two met again with Ciampa’s title on the line, however the distraction of the fighting Truth Martini and Matt Taven cost Lethal his opportunity at the Television Championship. So it was announced that at Supercard Of Honor it would be the rematch from Boiling Point II with the ROH Television Championship on the line when Jay Lethal challenges Tommaso Ciampa in a two out of three falls match.

Will Lethal repeat the result from Boiling Point or will  Ciampa miss a Lethal Injection ?

#1 Contenders match for an opportunity at the IWGP Heavyweight Championship at War Of The Worlds: “Unbreakable” Michael Elgin vs. Kevin Steen

These two first met in an ROH ring  for the ROH Championship back in Mississauga, Ontario, Canada at the promotions Glory By Honor XI event on 13th October 2012 which took both men to the limit but saw Steen retain his ROH Championship. The next time these two men would meet one on one would be in the Ring Of Honor Championship Tournament in the semi finals at Death Before Dishonor XI where Elgin finally got a win over Steen in a near twenty-minute match which once again took both men to the limit. They next met with an opportunity for a future ROH championship shot which Steen won by pinning Lethal. At Supercard of Honor  these men will receive an opportunity at the IWGP Championship at War Of The Worlds event in New York City.

Triple Threat Tag match for the opportunity at the ROH Tag Team Championship shot at War Of The Worlds: Forever Hooligans vs. Hanson & Rowe vs. reDRagon

Ever since “Rising The Bar” Night Two where The Young Bucks became the 40th ROH Tag Team Champions, reDRagon have been frustrated.  Their last title reign lasted two hundred and three days and saw them defend against Outlawz Inc, C&C Wrestling Factory, Adrenaline Rush, Jay Lethal and Michael Elgin and a tag team in this match.

That tag team is Forever Hooligans who beat ReDRagon at the ROH television taping in Providence, however their title regain didn’t last long as they lost the belts to the American Wolves at Allstar Extravaganza V (3rd August) in Montreal. Ever since then they lost the IWGP Junior Heavyweight Tag Team Championship to Suzuki-gun, made it to the final of the 2013 Super Junior Tag Team Tournament only losing to The Young Bucks in the final and they also had numerous opportunities in re-capturing the IWGP Junior Tag Team Championship but have been not successful.

The third team in this match of Rowe and Hanson found mutual respect for each other after facing off in the final of the 2014 Top Prospect Tournament and debuted as a tag team at the television tapings back in February taking on Team Benchmark and were endorsed as allies for Michael Elgin.

Can this newly formed alliance make their first steps on the road to possible tag team glory at War Of The Worlds on the 17th May? Or will one of the former champions get that rematch they have been waiting for ?

While brother Jay attempts to unify the “real” world championship with the ROH championship, brother Mark faces Mike Bennett again but this time with the No Disqualification stipulation. Back at State Of Art, Bennett defeated Mark after Maria distracted the referee while Mike hit Mark with a steel chair and then applied an anaconda vice on the out-cold Briscoe to win the match. At the television tapings he formed an alliance with the ROH Champion Adam Cole to take on the Briscoes in the match on the same tapings (which aired on 22nd March) where Jay cleanly pinned the ROH Champion. While that was being shown on TV at the final stop on the promotions road to this weekend in Dayton, Ohio, the brothers took on Cole and Bennett and this time Bennett shoved Mark through a ringside table.

Ever since the formation of Decade, this group has focused on competitors returning to the search for long-lost success and on developmental talent who they feel disrespect honor.  One developmental talent who has decided to take a stand against the decade is Cedric Alexander. The first member he took on was Jimmy Jacobs at “State Of Art” where he lost to Jacobs. Alexander attempted to follow the code and shake hands but Roderick denied him the right to shake the hand of a member of the Decade, and to make it worse the group got Cedric and his stuff and kicked him out of the locker room. Later on in the night Alexander returned to ringside to watch RD Evans take on Roderick Strong and accidentally hit Evans aiming to hit Strong causing Strong to become another victim of the RD Evans streak. At the 12th Anniversary, Alexander teamed with Adam Page (another developmental talent who have been in the target of The Decade) and Mark Briscoe to take on all three members of the Decade with the Decade getting the win. The next time the Decade and Alexander crossed paths would be in Milwaukee, Wisconsin at “Rising The Bar” night one where he teamed with Adam Page to take on BJ Whitmer and Jimmy Jacobs. Page and Alexander lost the match but after the match Page left with the men he was supposing to be against, not with Alexander but rather becoming a lackey for BJ and Jimmy.

At Supercard Of Honor Alexander will get to face Strong in an attempt to get redemption for his humiliation at “State Of Art”, or will the experience of the second ever triple crown champion be too strong against Alexander ?

Let’s rewind to February 2013, as Matt Taven defeated Tadarius Thomas to become the 2013 Top Prospect winner with help from Truth Martini and forming an alliance with the leader of the House Of Truth. At the 11th anniversary show, Martini’s interference once again helped to a Taven victory and also to his first piece of ROH gold in the form of the television championship. This would see the start of the longest television championship reign, lasting for two hundred and eighty-seven title days until he lost it to Tommaso Ciampa. At Wrestling’s Finest, Taven publicly fired Martini  before his opportunity to recapture the television championship from Ciampa. Ever since then Truth Martini has been appearing at ringside, distracting and even costing Taven possible opportunities for the win .