Nick: We’re back again, loyal readers, after yet another unexplained hiatus. At this point, you might as well call us the CW of comic book columns — we’re going to take random breaks for no adequately explained reason.

But in any event, we’re here this week to dig through our longboxes and take a a look at a concept very near and dear to both our hearts — the Green Lantern Corps. Specifically, we’re looking at Green Lantern Corps: Recharge, the book that reintroduced the corps after the resurrection of Hal Jordan in 2005. 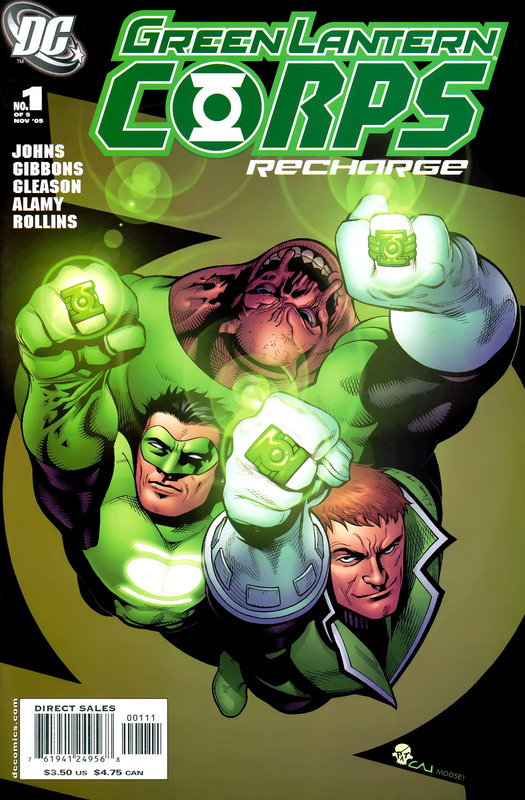 Greg: For many reading this column, the idea of Green Lantern existing without a Green Lantern Corps is strange indeed. But, with the exception of a few brief stories here and there, that was the status quo for about a decade, as “Emerald Twilight” wiped out the Corps in the mid-’90s. DC editorial at the time felt it was best to reduce the Green Lantern concept to one lone hero, Kyle Rayner.

Enter Geoff Johns. Johns was handed the keys to the GL kingdom and made the Corps a vital part of his rebuilding plan. Just before he came on board, characters and concepts like Oa, Kilowog and the Guardians of the Universe were brought back from oblivion, setting the stages for what happened in Green Lantern: Rebirth.

What we get in “Recharge” is the fallout from “Rebirth” and the events surrounding DC’s Infinite Crisis mega-event. Hal Jordan is back from the dead, Guy Gardner and John Stewart are once again slinging rings, and the whole gang (including Kyle and Kilowog) is attempting to restart the Corps properly by training thousands upon thousands of new recruits.

Nick: Yep, one of the major changes was the expansion of the Corps from one Lantern per sector to two, doubling the Corps from roughly 3,600 Lanterns to more than 7,200. This offered opportunities to introduce multiple new characters from across the universe, including two of my favorite new ringbearers — Vath and Isamot Kol from Rann and Thanagar, respectively. Those two planets, as longtime DC fans likely know, are much like the Kree and Skrull empires in the Marvel universe in that they are constantly at war with one another, and their respective peoples have little love for one another.

The introduction of these two Lanterns offers a glimpse at what it takes to overcome galactic politics within the Corps. Greg, I think I know the answer already, but which of the new Lanterns we get introduced to here in the early pages are your favorites?

Greg: I really like them all — Isamot, Vath, Green Man, etc. — but the standout for me is definitely Soranik Natu. A doctor from Korugar (yes, the same Korugar that spawned Sinestro and Katma Tui), Soranik initially wants nothing to do with the Corps. Like her fellow Korugarians, she associates the Corps with the tyrannical actions committed by Sinestro years prior. It’s a conflict that provides much of the book’s drama and instantly establishes Natu as a strong, independent thinker who won’t blindly follow orders.

Nick: Of the characters introduced here, she’s been the one who has stood the test of time the best, playing key roles in several Green Lantern stories in the years since.

Anyway, the story here revolves around the old guard of Kilowog, Salaak, Guy, John and Kyle trying to train the new recruits and help them understand the responsibility involved with being a ringbearer. And of course, along the way, the entire Corps and universe faces a threat of the highest level.

Greg: Before we go any further, we should probably let you know that this story was co-written by Geoff Johns and Dave Gibbons (of Watchmen and ’80s Green Lantern fame), and it was drawn by Patrick Gleason (of Batman and Robin fame). Johns was shepherding the Lantern universe when this story first hit shelves in 2005, but it would be Gibbons who would guide the characters for the next several years.

Gleason was relatively early in his DC Comics career, but his stylishness was evident here, particularly in his rendering of Guy Gardner. He manages to perfectly capture the condescending smirk that annoys Guy’s peers but entertains readers.

Nick: A fantastic point. Gibbons and Gleason have both known great successes at DC, and this is no exception. Gleason does a great job with facial expressions, as you said, but he also proves to be adept at depicting galactic action.

Greg: He has certainly proven to be one of the most influential and innovative creators in comics.
In any event, the bulk of the story revolves around the vulnerability of the still-growing and largely inexperienced Corps. That vulnerability puts the Lanterns in direct conflict with a colony of baddies from the Vega System known as the Spider Guild. “Recharge” shows a great early example of one of the staples of Johns’ Green Lantern run: cosmic mysteries. Johns has always been known for planting seeds early in his books that turn into larger stories years down the line, and this is no exception, as we get hints about off-limits areas of the cosmos, previous misdeeds by the Guardians, and even potentially nefarious future plans by those same blue-skinned seniors.

The Spider Guild story spends much of its time in the Vega System, an area previously considered taboo for Lanterns. That instantly brings up the “why?” question, and it’s one that isn’t really addressed here. Instead, the Lanterns focus on the problem at hand, but the readers get a chance to use his or her imagination and try to predict where future volumes will go. It’s great serial storytelling, and essential to the worldbuilding aspect of the book.

Nick: Yep. Of the many things to commend about this book, it’s that it works beautifully as a standalone story while also sowing the seeds for the years to come.

The Spider Guild here works as a fairly creepy antagonist, pulling Lanterns into neverending darkness. Of course, their plan is eventually found out and the stage is set for a climactic battle on Oa, the first time we really get to see the new Corps fight as one unit. It’s quite a spectacle, and one that is kind of a fist-pumping moment by the time it finally arrives. In terms of action setpieces, it’s easily the showstealer here.

Greg: Yeah, in some ways this is a perfect introductory book to hand someone if you want to introduce them to the weird, wacky mythos of Green Lantern. It’s got a nice hodgepodge of the different types of stories GL creators will tell: mystery, horror, action, espionage. Each of the main characters gets a moment in the sun, as Vath and Isamot learn to work together, Kyle leads the charge on the Guild, Soranik steps up when it matters most, and Guy becomes the most unlikely inspirational figure in the Corps’ history.

As is always the case with Green Lantern comics, the coloring is key here. While Moose Baumann (who also colored “Rebirth”) isn’t my favorite Lantern colorist, he knows how to contrast dark backgrounds with the shining green light of the Lanterns, and the colors pop out particularly well within the Spider Guild’s nest.

Nick: So, overall, a buy, read or avoid here? I’m going full-out buy. It’s essential reading for Geoff Johns’ Green Lantern run, which is one of the greatest runs in the history of comics. If you’ve ever been intrigued by superheroes, sci-fi or a nice mix therein, this one can’t be avoided.

Greg: Oh, this is a definite buy. I don’t love it to the same degree that I love “Rebirth,” but in some ways I think it’s a more accessible story. It stands as one of the best GLC stories, and it set the stage for a pretty great and underrated run by Gibbons and company.

Nick: It’s certainly a great entry in the genre.

Greg: One minor complaint about my trade collection (which is an original softcover printing): there is a recurring typo problem in which Sector 1417 is used interchangeably with Sector 1471. I’m still not entirely sure which is supposed to be the correct sector for Tarkus Whin.

But with that said, head to your local comic shop and request this great book or head on over to Amazon through the helpful Place to Be Nation link right here on the page.

Nick: Well, that about wraps up this month’s edition of the Longbook Hunters. Check back next week as we take an ill-advised dip into the turbulent waters of the recent Batgirl variant cover controversy. It’s a story that’s taken the comics community by storm, so we’ll weigh in as best we can with our perspective.

Greg: Yep, we’ll be back next week to offer our Hot Fresh Takes ™ on the controversial Killing Joke/Batgirl cover.

Nick: Until then, you can give us your thoughts on Recharge through Twitter (@gphillips8652 and @nickduke87), email (GregP@placetobenation.com and NickD@placetobenation.com) or through the new Place to Be Nation Comics Facebook page.