Greg: This month saw the unveiling of Marvel’s “Daredevil” on Netflix, and it’s got the comics and TV worlds buzzing. What better time, then, to visit one of the many prominent creative tenures on the character? This week, Nick and I become the Longbook Hunters once more to examine “Hell to Pay Vol. 1” by Ed Brubaker and Michael Lark. 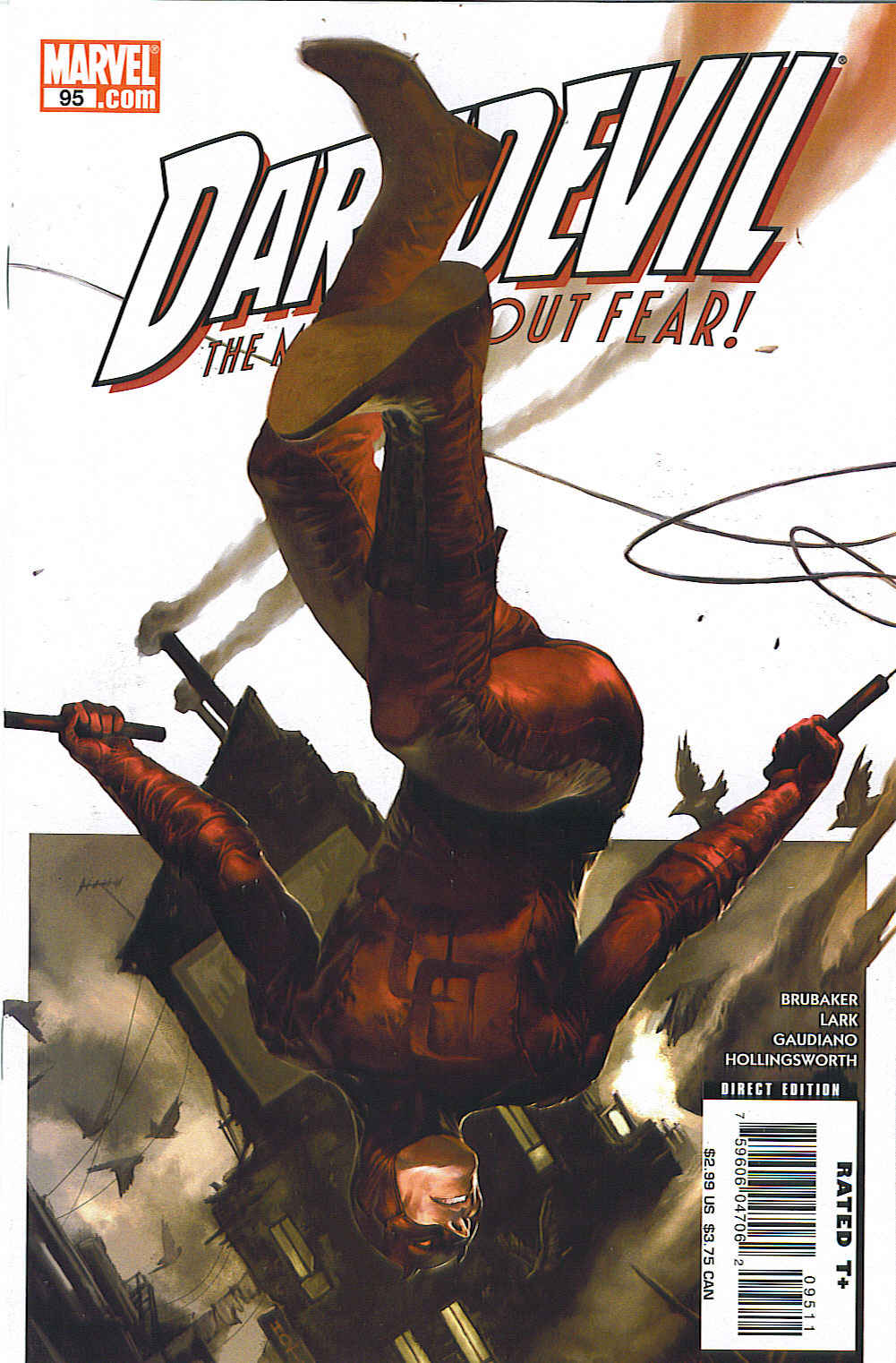 This story takes place in the midst of Brubaker and Lark’s multi-year run on ol’ Hornhead’s monthly title, following a story that took Matt Murdock overseas and even to prison.

Nick: One thing you’ll find as we work through this review is that Greg and I may not be exactly sure where this fits in the pantheon of Daredevil’s history, as we haven’t read that many Daredevil stories in our time. Me, I’ve read the Kevin Smith run and that’s about it.

So, I know this story took place after “Civil War,” and I know Daredevil’s identity was exposed at some point prior to Civil War, but I’m not entirely sure how long after Civil War it comes and what events have transpired since then.

I was also largely unfamiliar with some of the characters used here, such as Matt Murdock’s wife, Milla Donovan. I wasn’t even aware Daredevil had married until picking up this story. In addition to Milla, there were others I was unfamiliar with such as Melvin Potter, a villain formerly known as The Gladiator, that Murdock’s law firm agrees to defend. Speaking of the firm, another new character (new to me, anyway) was Becky Blake, who it turns out is a longtime recurring Daredevil character that I was somehow unaware of.

Anyway, I say all that to say this: This is a story that featured numerous characters I had never heard of before. It is also a story that takes place midway through a creative team’s run. These two factors in almost any other situation would add up to create a trade paperback that I would have a hard time following or understanding. Not the case here. Brubaker and Lark do an incredible job of making this book feel new reader-friendly, even if certain details are based in longtime continuity. The first issue of the trade provides a nice recap of the Matt and Milla romance from her point of view, helping to understand the character and how she views her husband and his double life.

From there, it’s a breeze of a read that weaves enough mystery to keep you intrigued, It’s not often I blow through an entire graphic novel in a single sitting, but I burned through about 80 percent of this one in one reading. It’s that much of a page-turner.

Greg: Yeah, “Our Love Story,” the issue that begins this collection, is a tremendous introduction to Daredevil’s world and his status quo. It doesn’t hurt that it’s brilliantly illustrated by Lee Weeks. It recounts their love story, obviously, and gives new readers insight into who Milla is, as she hasn’t been featured in Daredevil’s few off-the-page adaptations.

Every trade needs at least a page outlining the events leading into it, and this one replaces that single page with an entire issue, which is great.

After that, Brubaker and Lark take us on an old-fashioned noir mystery ride that proves the old Gotham Central team never lost its touch.

Nick: The central plot here involves the aforementioned Melvin Potter, who is serving time at Ryker’s Island. When Potter is accused of murdering two of his fellow inmates, the also aforementioned Becky Blake convinces Matt and Foggy Nelson to take on his defense.

It turns out that Potter’s transformation into the Gladiator is somewhat of a psychotic state, in which he is not in control of his actions and shows true remorse. In this instance, however, Potter denies ever committing the murders. Matt suspects Melvin is hiding something, but isn’t sure what. This mystery surrounding Melvin’s motivations and who, if anyone, is pulling his strings, makes up the crux of the plot.

Along the way, however, we see Matt and Milla’s marriage weakening as the days go by. We also see Matt’s borderline dependence on his life as Daredevil, using it as a coping mechanism for the numerous tragedies he has experienced and the state of his marriage.

But the plot here wasn’t as important to me as the tone of the book. Brubaker and Lark did a fantastic street-level, noirish, gritty story in Gotham Central, and have managed to largely replicate that tone here. I love fantastical superhero fare, but this kind of book is right in my wheelhouse, so to speak.

Greg: You do love your grim and gritty crime books. Luckily, so do I!

Don’t get us wrong, there is some humor and some superhero swashbuckling here, but the book would be very much at home on a shelf next to a book by Raymond Chandler. It’s that steeped in the elements of good detective fiction.

Lark draws settings and characters as if they exist in a nostalgic haze, not unlike the dreamy figures of Darwyn Cooke, and there’s almost a nightmarish feeling to many of the panels. It creates a menace and dread that builds throughout the story, as I got the feeling each page could lead to Matt Murdock’s world crumbling to dust.

Nick: The art is truly outstanding, especially because it fits the story so well. I wouldn’t necessarily want Lark on something like Thor or Superman, but his style just fits here.

The comparison is somewhat lazy given the duo’s previous works, but this really does read, look and feel like a Marvel version of Gotham Central, what with the investigations and legal maneuvering by day and the gritty crime action by night.

Greg: Brubaker’s experience writing Batman shows here, as he is able to deftly transition between Matt and Daredevil, making sure to give each part of Murdock’s persona its proper due. Brubaker also makes expert use of side characters like Foggy Nelson, Dakota North and the aforementioned Milla.

The side characters serve a few functions — to provide perspective from normal people (i.e. people who aren’t obsessed, costumed vigilantes) and to establish what makes Matt tick in his everyday life. One key difference between Daredevil and Batman is that Matt clings to his “real life” and the people close to him, even when he outwardly tries to push them away. Brubaker and Lark show us a Daredevil tormented by his emotions and genuinely confused as to the right thing to do in certain situations. It’s a distinctly human approach to a superhero story.

Nick: It really is, and it helps to distinguish Daredevil from the comparisons to Batman that are often made due to their similar street-level approaches.

I also love Lark’s depiction of Matt’s powers, as he uses the traditional concentric circles to depict his radar sense while also using techniques such as shadows of Daredevil to convey his acrobatic movement. Lark’s great at capturing mood, but he proves himself as one hell of an action artist here as well.

Greg: Yeah, there is plenty of action here mixed with the slower character moments, and they all look beautiful.

I really dug this book. There were a few times the plot lost my interest, but Brubaker reeled me back in by the end of each chapter, so that’s a minor complaint. The mystery was compelling throughout, and my lack of Daredevil knowledge probably helped in that regard. I genuinely had no idea who was responsible, and it helped me identify with Matt.

Was there anything that didn’t work for you in this one, Nick?

Nick: I wasn’t too high on the Lily Lucca subplot, though I’d expect that likely has something to do with the fact this is only the first half of the story. I’m sure there’s more than meets the eye here, but her story didn’t hook me, and because I ‘m unfamiliar with her and Matt’s history, I didn’t feel the emotional weight that I’m sure was intended.

Other than that, though, I pretty much loved this. It, coupled with the recent debut of the Netflix show, make me want to go back and read some more Daredevil, which I will likely do via Marvel Unlimited.

Greg: So I’m assuming that means you think our readers should pick this one up?

Nick: Absolutely. Like I said, it’s kind of sold me on the character and I’m going to be seeking out the rest of Brubaker’s run, as well as other creators’ acclaimed runs ASAP.

If you enjoy street-level stories with a noir slant, this is for you.

Greg: I agree. I bought this book several months ago on a whim and instantly regretted not having the rest of the Brubaker/Lark Daredevil stories. It’s the first full trade I’ve ever read of the Man Without Fear, and I have already consumed two or three more Daredevil trades since finishing this one.

Check it out if you’re a fan of the show or just interested in checking out a good superhero crime story! And with that, we bring this thing to a close. Speaking of Daredevil, we’ll be back in a few weeks for an Off the Page look at the entire first season of Netflix’s “Daredevil.” And next week, we’ll be right here with a Rundown of the top comic book-related news items of the month.

Nick: Until then, you can give us your thoughts on Daredevil: Hell to Pay through Twitter (@gphillips8652 and @nickduke87), email (GregP@placetobenation.com and NickD@placetobenation.com) or through the Place to Be Nation Comics Facebook page.

Greg: And if you want to pick up the book in question, head to your local comic shop or click on the Amazon link on the side of this page so Justin and Scott can keep the bills paid.