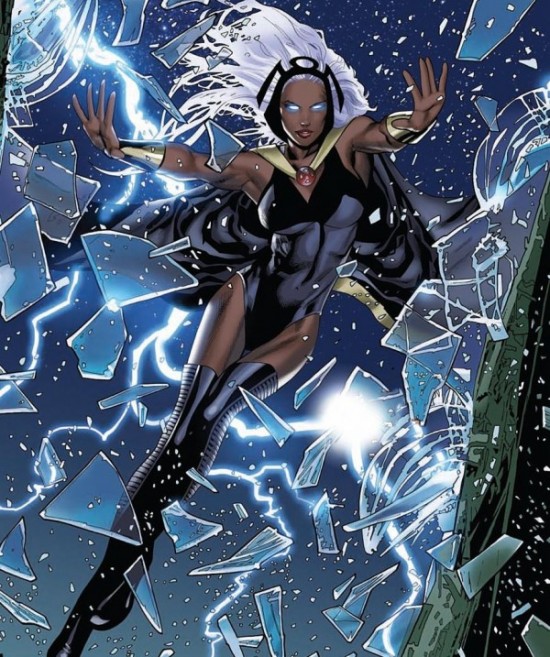 Nick: I was wondering when she would pop up in this discussion.

Greg: Undoubtedly the most famous and popular minority character in comics, Storm has been around in five different decades, yet she remains one of the most vital ingredients to Marvel’s most popular team (arguably), the X-Men.

Nick: Marvel has also believed in her enough to spin her off from the X-Men at various points, most notably her marriage to Black Panther and her assumption of the title of Queen of Wakanda.

Greg: I’ve had a love/hate relationship with Ororo Munroe throughout my comic fandom, but I always find myself coming back around and loving something about her. She’s been the focal point, or one of the focal points, of most of the great X-Men stories. From her stand against Callisto and the Morlocks to her turn as leader of the X-Men’s Gold Team and her romantic trysts with Forge, Wolverine, Bishop and Black Panther, she’s had more interesting storylines than I can count.

She is usually portrayed as one of the most powerful mutants around, which can be an unusual position for female characters, and she adapts and changes with the times both in looks and personality, while maintaining who she is in her core.

Nick:  What do you think keeps drawing you back to the character?

Greg: I think what draws me back in is her strong sense of morality. It’s a different, non-Western morality, but I’ve always enjoyed how her sense of right and wrong conflicts with the views of her teammates, particularly Cyclops and Wolverine, who are themselves diametric opposites.

Nick: I’ve always enjoyed her psychological torment at the hands of the Shadow King as well. Mental illness isn’t often handled well in comics, but I’ve always though they did it well with Storm. 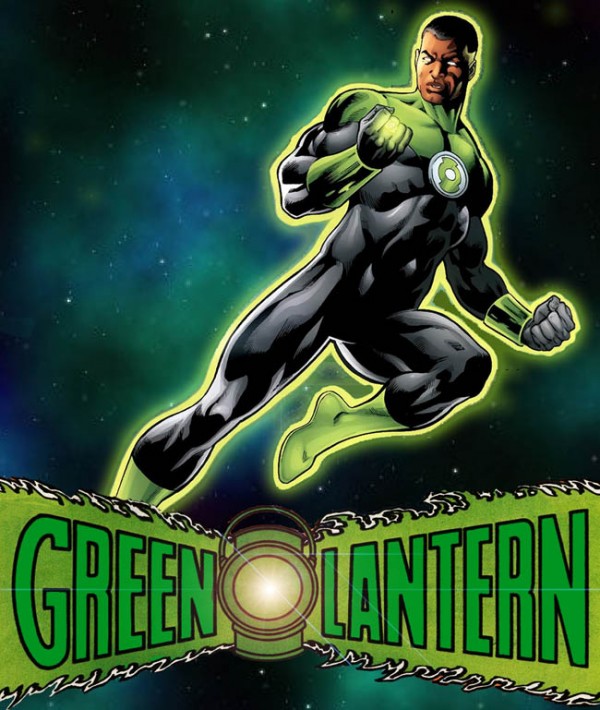 Nick: I expect we’ll get into John a bit more in a moment, so I’ll try to be brief. Despite the fact that he’s no higher than number 3 on my favorite Lanterns list, John Stewart checks in at number 2 on this list. One of the first major black comic characters, DC actually replaced Hal Jordan with John Stewart for a time in the 1970s, allowing John to represent the African-American community in a positive light.

John has come a long way over the years, eventually becoming an ex-Marine-turned-architect who earned the spot as Hal’s reserve GL while Guy Gardner was in a coma (don’t ask). However, in the early 1990s, he got his own spotlight in the pages of Mosaic, a truly different comic at the time largely because of how cerebral it was. It was here that we got to see the inner workings of John’s mind for the first time, and learn how the events of his life were still affecting him, namely the murder of his alien wife Katma Tui at the hands of Star Sapphire.

However, I would be remiss if I didn’t mention the best portrayal of John I’ve seen, that of Justice League: The Animated Series. Bruce Timm and company redefined the character for the previous generation while also introducing him to a legion of children who now consider John Stewart to be “their” Green Lantern.

He’s had his ups and downs, but no Lantern has been more committed to the Corps over the years than John Stewart.

Greg: The importance of the animated version of John cannot be overstated. I admit that I was one of the Hal Jordan fans screaming to the heavens when the Justice League producers announced John Stewart would be on the show. It only took a few episodes to change my mind. Timm and company, thanks in no small part to the writing of Dwayne McDuffie and the voice talents of Phil LaMarr, were able to craft one of the most interesting, three-dimensional characters in the entire DC Animated Universe. Plus the relationship between John and Hawkgirl was groundbreaking in the same way the Luke Cage/Jessica Jones relationship was. 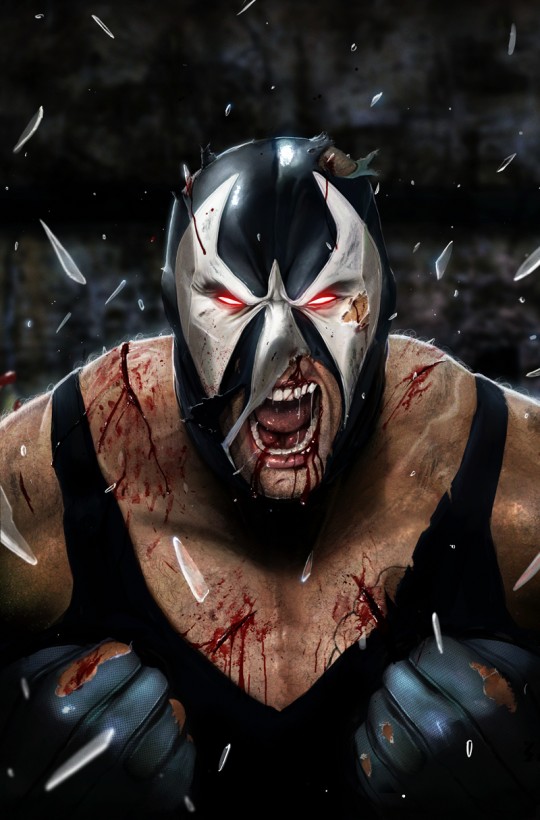 Nick: I’ve said my piece on the man who broke the Bat, so I’ll turn it over to you.

Greg: While many online have derided Bane over the years, I loved him from the start, and I always felt (even as a child reading Wizard Magazine) that people who characterized him as a generic musclebound wrestler either hadn’t actually read Vengeance of Bane or were simply missing the point. As you pointed out earlier, Bane was presented as Batman’s physical AND mental equal. He was a master strategist who spent years consuming every war and tactics book imaginable. He honed his body and mind to peak condition, with a little help from the super-steroid Venom, which also served to make him emotionally volatile.

I particularly enjoyed Bane when he wasn’t hopped-up on Venom during “Knightfall.” I enjoyed simply seeing him strategize with his cohorts, displaying a level of calculated malice rarely seen in Batman comics outside the Joker. Bane’s motivations were clear and understandable, yet they weren’t so understandable that you began rooting for him. And like many great characters, there are different takes on him that work. For instance, Gail Simone took Bane in a radically different direction in her Secret Six series, but it worked in a huge way. In addition to comedic value, Bane’s bizarre sense of fatherly protection toward Scandal Savage provided the backbone to the book’s final few arcs.

There have been many villains created to be Batman’s physical match throughout the years, but none were more compelling, visually and otherwise, than Bane.

Nick: Well said, sir. I really need to get caught up on Secret Six, given how much I loved the team’s Infinite Crisis tie-in and how much I enjoy the work of Gail Simone. 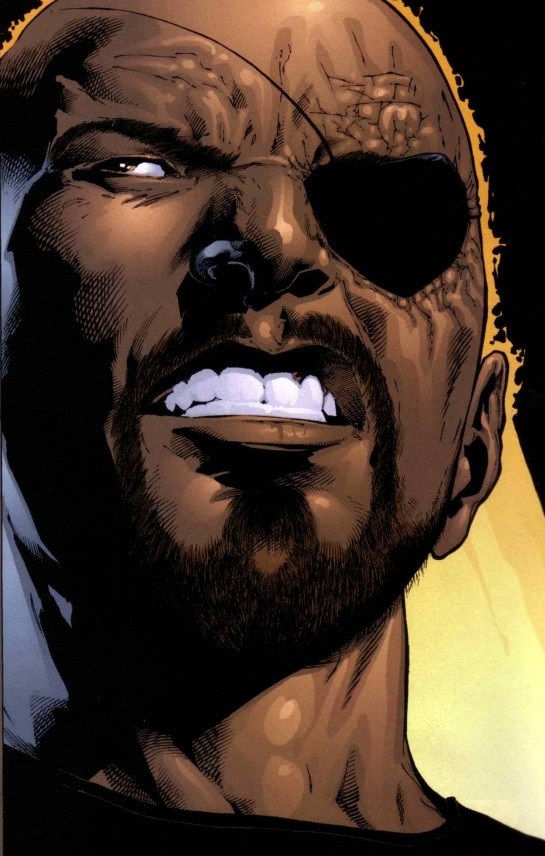 Nick: I went back and forth on the debate between Ultimate Fury and John Stewart, but then I remembered a single issue of a series called Ultimate Fallout. The series dealt with the death of Ultimate Peter Parker, one of my favorite characters in all of fiction. Since the inception of the Ultimate Universe, Nick Fury had been portrayed as the man pulling all the strings. He was a guy who shamelessly played multiple sides against one another, and was a master manipulator and even politician. He really was kind of a jerk in those days, but he eventually got his comeuppance when he was abandoned in another universe. But, the less said about that, the better. Eventually, he returned and appeared to have seen the error of his ways, even though there were hints that he was just biding his time. He eventually regained his post as head of SHIELD, and as such, was able to continue his mentorship of Peter Parker, a relationship that started in the early days of Ultimate Spider-Man. However, once Peter was killed in action, he was eventually confronted by Mary Jane, who blamed Fury for Peter’s death.

In one of the more heartbreaking moments the Ultimate Universe ever had to offer, rather than lashing out at Mary Jane, Fury accepts responsibility for Peter’s death, saying he should have helped to protect him. He’s left in tears, finally having to face the prospect of dealing with the loss of a boy who had become something of a surrogate son. It’s that development that sets him apart from his 616 counterpart. Rather than always being right, this Fury has been drug through the mud and has come through a better man. Granted, I stopped reading the Ultimate U after the death of Ultimate Peter.

Plus, the character’s influence on the big screen adaptation of Fury is undeniable. We have Ultimate Nick to thank for Sam Jackson as Nick Fury, and now a character called Nick Fury Jr. has found his way into the mainstream U and seems to be very similar to Ultimate Nick.

Greg: I read an interesting anecdote that, after seeing his likeness in The Ultimates, Samuel L. Jackson actually called Marvel to secure the rights to play Fury in the movies. That’s an awesome story, whether it’s true or not.

Nick: I still wish we’d gotten Steve Buscemi as Bruce Banner as was suggested in The Ultimates, but that just wasn’t to be. 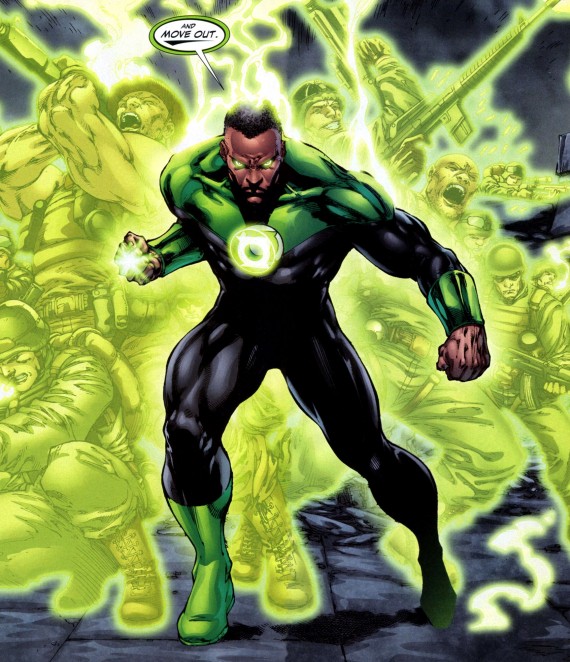 Greg: John is a character I knew nothing about as a kid. Thanks to the Justice League animated series and Geoff Johns’ epic revival of the Green Lantern Corps, I’ve really grown to love everyone’s favorite Marine-turned-architect over the last decade. Reading his appearances in the ’80s, it becomes apparent just how much I missed as a child. Of all the members of the Corps, John is the one most bound by duty and the one who is most willing to make the tough choices. Probably because he’s been through more personal agony than almost any character in comics.

From the murder of his beloved wife to being paralyzed to accidentally destroying an entire planet to intentionally killing the heart of the Corps (the living planet Mogo), John has seen and experienced incredible amounts of heartache. Yet he somehow trucks along, made stronger by his pain. In some ways, John is a DC version of Wolverine, in terms of being forced to deal with or compartmentalize the crazy things he’s had to go through.

While Hal gets the most glory, Kyle gets the most ladies and Guy kicks the most butt, John is simply the model of consistency in my favorite superhero line.

Nick: Well, that about wraps it up for us here this week. Greg, any final thoughts?

Greg: I think this list illustrates how great characters can overcome the biases some companies, creators and fans use to keep the number of minorities in comics limited. Hopefully in the next decade, we’ll see some new characters join our respective lists.

Nick: I think the big thing about all of these characters is that they’re all fascinating characters in their own right, regardless of their race, gender, sexual orientation or religious affiliation. In the hands of great writers, there’s no limit to where these characters can go.

Catch us next week in The Longbook Hunters as we take a look at Alan Moore’s V For Vendetta!